We have mentioned that Wal-Mart has cut a deal with Bharti to expand into India. India has laws that preclude foreign companies from actually operating retail stores, so the idea is that Wal-Mart would function as a wholesaler while Bharti actually operates the stores.

The final paperwork remains to be signed, but Bharti claims it will roll out the first six stores in March 2008.

Yet opening stores in India doesn’t seem to be easy for anyone, especially if you want to sell fresh fruits and vegetables. It seems that in what is still a very poor country, the selling of fresh produce is the livelihood for many people and these merchants are binding together to fight new competitors.

An organization named Reliance Retail has opened many small produce stores with plans to open other formats: 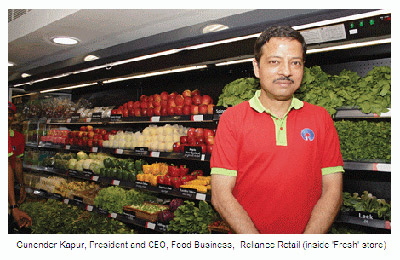 ….Reliance Retail had commenced its retail operations in the country with the opening of a first cluster of 11 stores on 3rd November, 2006, in Hyderabad. Reliance ‘Fresh,’ in a short span of five months, has since come a long way with the tally of its neighbourhood, convenience, stores going up to 80. ‘Fresh’ stores are already operational in several parts of the country including Hyderabad, Chennai, Jaipur, NCR, Delhi and a few tier II towns mostly in Andhra.

Following are some of the salient features that are common to Reliance ‘Fresh’ format of convenience stores across the country:

Depending on the roll out of its back-end infrastructure, Reliance will continue to open new stores in different urban areas of the country…

But protests and political activist are trying to stop this rollout:

After recent protests in Ranchi (Jharkhand) and Indore (MP), Reliance Retail faces opposition from trade body in Haryana too!

While, ‘Fresh’ in the past has faced opposition from vegetable and small vendors in Jaipur and Chennai, certain sections of the ruling alliance in Kerala and West Bengal are also opposed to the entry of big business in retail in general and of Reliance Retail in particular.

Now, Haryana Pradesh Beopar Mandal (Haryana State Trade Federation) has warned that it would resist any move by Reliance ‘Fresh’ to open its stores in Haryana. This was stated by the Federation President Bajrang Dass Garg, who is also Chairman of the Federation of Consumers Cooperatives Wholesale Stores Limited (CONFED), while speaking to media persons, reports UNI.

“Wherever Reliance ‘Fresh’ had opened its stores for retail sales of fruits and vegetables, the business of vegetable venders had suffered badly,” added Garg. He hoped that the Congress ruled state government would not compromise with the interest of traders and small shopkeepers.

The opposition is being organized around something called Roji Bachao Samitee, that roughly translates as the Save Livelihood Committee. In a country such as India, where providing jobs is such an extraordinary priority, it is doubtless going to be very difficult to keep in mind a long term perspective as the economy goes through a rationalization.

It is difficult even when the new stores are all owned by fellow Indians. So the involvement of foreign names in this economic transformation will probably just give opponents another company to hate. Which is why such effort is being given to what the stores should be called in the Bharti-Wal-Mart collaboration:

The Bharti Group and US partner retail giant Wal-Mart, are planning to use three separate brand names in India for three different store formats. “It’s only logical that we call the cash-and-carry format Bharti-Wal-Mart as it’s a joint venture between the two companies. The Bharti-owned front-end retail stores and the franchisee-owned neighbourhood stores will carry two different names. It makes sense to operate under three different names but nothing has been finalized as yet,” Bharti Group chairman Sunil Mittal told ET.

For a company of Wal-Mart’s size, an involvement in a market the size of India’s is almost irresistible. Yet this is, almost certainly, a very long term investment with much turmoil to be expected in the years ahead.