Time To Think About Tip Murphy, Golf And Tiger Woods

This is golf tournament time in the industry. There is still time to sign up for the Tip Murphy Memorial Golf Tournament here.

So it might also make sense to think a bit about Tiger Woods.

The Wall Street Journal ran a piece titled, The Unsettling Sight of a Tiger Tamed, that it subtitled: Woods’s Career-Worst Score Furthers a Kind of Harsh Correction on a Career That Had Been All Irrational Exuberance.

Which raises the question of what creates and allows for exceptional accomplishment?

Fortunately, Charles Murray, one of America’s most insightful thinkers, wrote a book called

Human Accomplishment and has applied his learning to Tiger Woods and produced an intriguing piece for The American, titled Why Tiger Won’t Catch Jack, which explains why, in theory at least, Tiger Woods will not manage to exceed the Jack Nicklaus record for winning major tournaments. Tiger Woods must win four more majors to equal the Nicklaus record and five to beat Nicklaus. In a nutshell, here is his argument:

Murray points out that the component skills one uses in golf form an almost perfect bell curve:

The component skills form almost perfect normal distributions — bell curves, if you prefer. Here, for example, is the distribution of putts per round among pro golfers: 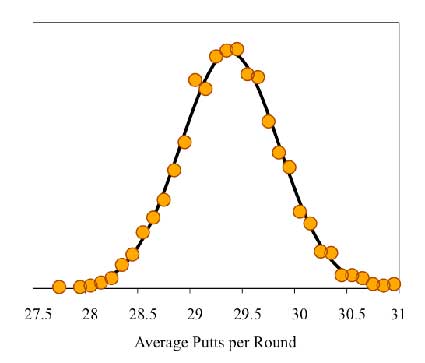 But victories in major tournaments do not form a bell curve:

And so when it comes to the number of major victories, there is no bell curve. Instead, the graph looks like this even when the sample is limited to golfers who won at least one major — a severe constraint indeed. The figure comes from Human Accomplishment. It is based on golfers who had completed their careers by 2001, so it omits Woods. 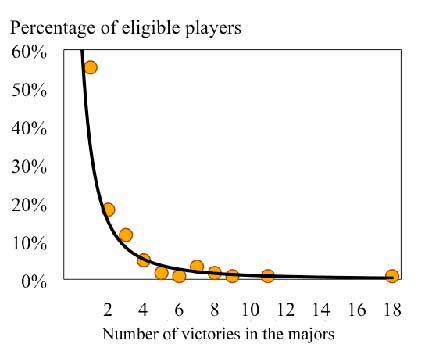 Charles Murray, who is the W.H. Brady Scholar at the American Enterprise Institute, concludes this way:

The combination of qualities that enabled Nicklaus to win 18 majors and has enabled Woods to win 14 is freakish. To take just one example, Woods has an astonishing record of sinking difficult putts at critical moments, including on the final hole with victory at stake. That’s not just a matter of reading the greens accurately and having a good putting stroke. It’s a product of a mental state that the rest of us can barely imagine, the product of a Chinese puzzle of psychological strengths — including, one sometimes suspects, telekinesis.

The role of those psychological strengths is why so much of the commentary about Woods’s play since he returned is beside the point. The commentators focus on whether his component skills are returning to their pre-scandal levels. He can return to precisely the same place on the bell curves of the component skills that he occupied before the meltdown in his personal life, but the package will not be the same. Tiger Woods has experienced a sort of concussion to that Chinese puzzle of psychological strengths, and there must be some residual damage that won’t ever go away.

The long-term effects can be quite small. When we are talking about the extremes of human accomplishment, there is no wiggle room. The package changed at all is no longer at the one-in-many-millions extreme that is required. Woods will still be a sensational golfer, winning a lot of tournaments and probably a few more majors. But to predict that Woods can win five majors between now and the end of his career — something that only 17 other golfers have done in their entire careers — assumes that nothing in the last year has significantly degraded the freakish combination required for extreme accomplishment. I find that assumption untenable.

We think this line of thought is intriguing and not just for those who follow golf.

As business people, most of us are responsible for employees and rare is the executive or business owner who hasn’t gritted his or her teeth because somehow an employee’s problem — financial, emotional, physical, etc. — are suddenly our own.

Yet if human achievement is as Murray contends, “a Chinese puzzle of psychological strengths,” then maybe paying attention to these problems is more useful than sending someone to a training session.