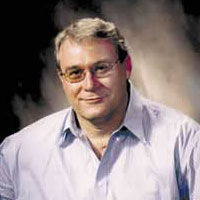 Pundits of limited vision have been focusing on the switch of the United States House of Representatives and United States Senate as the big news of election day. The Perishable Pundit, however, knows where the real levers of power lie in America and is pleased to congratulate Dennis Donohue on his election as Mayor of Salinas:

According to the Monterey Herald, “Donohue has prepared for the job of taking leadership roles in three important ballot measures, including library-saving Measure V. His candidacy presents the city with an opportunity to think creatively and put together public-private partnerships that could change the shape of the agribusiness industry locally. Donohue sees the Salinas Valley as a Silicon Valley of agriculture — well-positioned to develop new skills and markets in such areas as bio-fuel. For some, it might sound like science fiction, but Donohue is immersed in agribiz and he’s bright enough to know what he’s talking about.”

The hometown Salinas Californian endorsed Donohue with these words of praise, “Donohue is a potent blend of intelligence and passion — the kind of attributes the city needs in a new mayor. And as his record of community involvement demonstrates, he’s not afraid to roll up his sleeves to pitch in at the grass-roots level. To him, “Imagine a great city!” is more than a campaign slogan. He believes it in his gut. Donohue’s main platform is economic development. He wants to create a business-friendly culture at City Hall and make Salinas a center for agriculture innovation, such as farmed pharmaceuticals, bio-fuels and pest-resistant crops.

In agribusiness since 1988, Dennis worked for River Ranch, Fresh Express and Fresh Western before joining European Vegetable Specialties in 1996. He became president of the company two years later. EVS, a privately held company, is the largest producer of radicchio in the world, with growing operations and customers in North and South American, Europe and the Pacific Rim.

He believes a rising tide lifts all boats, meaning crime and social problems can be eased in a more prosperous Salinas.

“Everyone in this city is interested in opportunity,” he told the Salinas Californian editorial board. “It unites everybody to think their kids can come home to economic opportunity.”

The Pundit and his staff have always found Dennis to be a straight-shooter. Even when he had news we didn’t want to hear, he picked up the phone and put it on the table.

Salinas has long had many problems, and the economic and reputational blow the Salinas Valley took in the spinach crisis won’t help. We applaud Dennis’ willingness to be involved in public service and wish him and the residents of Salinas success in making “great city” more than an exercise in imagination.