REVOLUTIONS IN UK RETAILING
Is Tiny Whole Foods Setting An Example For London Retailing?
New Retail Dynamics To Be Discussed At The London Produce Show And Conference

In preparation for the upcoming London Produce Show and Conference, we’ve been spending a good amount of time in the UK, and a fair amount of that time has been spent visiting retailers.

As the battle has been painted, you have the so-called “Big Four” — Tesco, Sainsbury’s, ASDA and Morrison’s — struggling, while deep discounters, such as ALDI and Lidl, and upscale chains, such as Waitrose and Marks & Spencer, gain market share. This is all true, but we wonder if Whole Foods isn’t a sleeper in the market, one deserving of much more attention. 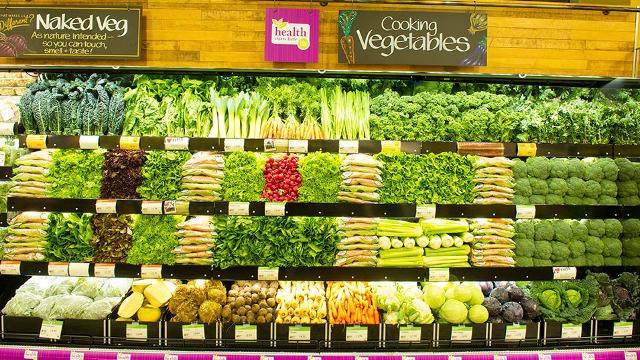 Way back when Whole Foods first opened its large and high service Kensington Store in 2007, much attention was paid to Whole Foods. Waitrose particularly saw it as a threat and focused on preventing Whole Foods from growing in the UK. 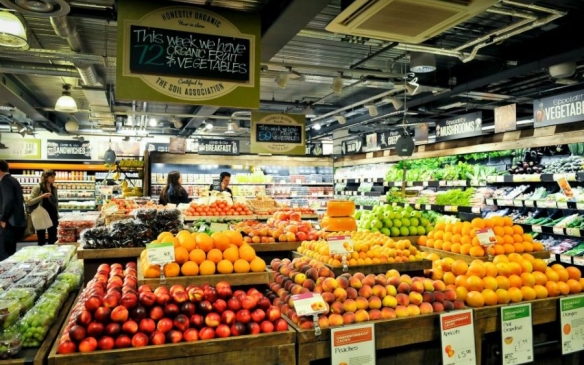 Yet that initial store lost a fortune, and indeed we are told that, only now, seven years later is it moving into the black. As the losses cascaded, other retailers looked away, figuring that model was a failing one.

Kudos though are due to Whole Foods for staying true to its strategic vision, and one notes the distinction in the approach from Tesco’s journey to America as Fresh & Easy. Whole Foods made a mistake with the Kensington store. It was too big, required too much labor for the service and restaurant areas and, as such, it lost a lot of money. But it was just one store, and Whole Foods did not build a giant distribution center.

In fact, it worked with distributors and wholesalers, only building its first small DC last year. Also to gain local knowledge, Whole Foods bought Fresh & Wild, a small chain, back in 2004, three years before opening its Kensington flagship. This dramatically reduced the number of expatriates Whole Foods had to send to the UK. Keeping overhead low, acquiring local knowledge and opening just one store gave Whole Foods that most precious of resources — time. As it developed new stores and closed other stores, it has come upon a formula that in many ways deserves a second look.

We went to visit the new Whole Foods in Fulham. It is a small store, about 23,000 square feet, but it is absolutely beautiful and an incredibly different experience compared to the heavily packaged experience the big multiples proffer in the UK.

Everything is loose and fresh. It has service meat and a cheese bar, innovative things such as bulk frozen fruits sold loose and a very popular in-store smoothie and juice bar.

Now it has to be noted that the big multiples in the UK probably have the most efficient supply chain in the world. They have for decades relentlessly worked to reduce labor needs in stores and to drive costs out of the system.

Unfortunately, reducing costs in the supply chain only produces a competitive edge if one chain does it and others do not. Morrison’s, which doesn’t really play in London, is a bit different, but all the rest of big chains in the UK are, however, ultra-efficient. So they beat each up over price because that is the competitive edge that efficient supply chains produce, but the relentless focus on price just leads to beating up suppliers, squeezing margins out of the system until, in the end, suppliers want to sell you only as a last resort and consumers tolerate but don’t enjoy the low levels of service and lack of warmth.

Now one question is whether, as an American, the Pundit is looking at it wrong. We in America are used to big bulk displays of produce and to interacting with people at service departments. Perhaps the British find all this packaged stuff just wonderful.

We don’t think so, but a look around the Whole Foods clientele base reminds us of another fact: Those who view London as a British market are doomed to fail.

This is a city filled with people from Poland, Russia, Algeria, Nigeria, the Caribbean, Rumania and a whole lot more. And it is not just Americans accustomed to bulk fruits and vegetables. The way they sell product in Algeria carries a closer resemblance to the US practice than to the British.

UK retailers have micro-marketed their stores to ethnic groups, but just recently have started recognizing that London is a world apart. Tesco recently set up a separate focus for London, but there is no evidence of totally different concepts.

Yet the critique of Fresh & Easy when it opened was that it was cold and sterile as opposed to say, Trader Joe’s, which was warm and friendly. This is the same critique a big part of the London population feels toward many British retailers.

Does the Whole Foods model have legs? Certainly management in the UK is still experimenting. Whole Foods opened a store in Scotland, which has struggled, and now they seem intent to focus on London, where the diverse population is more open to the concept.

Perhaps the biggest difference that Whole Foods brings to the market is a pivot in focus. All retailers everywhere and all the time have to choose where to focus their attention. In advertising meetings in the US at the right time, you see one inclination urging that cherries be placed on ad, because that is what will delight the consumers. Another side argues for something more stable — pointing out that there might be hail and the cherries may not be available, etc., etc.

And so each retailer has to always confront whether it will be logistics-driven or merchandising- and marketing-driven? And that makes all the difference.

For a long time, Tesco in the UK saw incredible growth because it opened many more stores. With talk of its incredible “land bank,” it seemed impregnable in the UK. But the ALDIs and Lidls and Costco’s and Whole Foods of the world are finding their way in. Even ASDA, a sleeping giant that was frustrated by its inability to find sites, seems to now be finding a new focus  and with Ocado and Morrison’s new online service, real estate isn’t necessarily going to be as important as it once was.

This is going to mean that the giants such as Tesco have to change. Partly they will need to focus on delighting consumers more than driving pennies from the supply chain. And then there is this secret: To triumph they need new and innovative products and that means they will need a supply chain that wants to help them win.

The British suppliers have little choice and so want to work with the British multiples, but you go to foreign supply sources — places that have options — and they will say that the big British multiples are very demanding and don’t want to pay. Increasingly that will mean that the big British multiples will lose out as growers of proprietary varieties divert these valued and sometimes scarce products to markets that will pay a premium. So firms such as Tesco need a cultural shift where they try to win the Miss Congeniality Award when dealing with vendors. That’s not a cultural shift; that is an earthquake.

It is really quite fascinating and important to the future of the industry. We will be discussing this topic and more at the Perishable Pundit’s “Thought-Leader’ Breakfast at The London Produce Show and Conference.

You can register to attend right here.

And if your company is interested in exhibiting or sponsoring an event, just let us know here.

It is going to be an incredible event, a unique combination of commerce, intellectual exchange and comradery. We hope you will decide to join us.