Pundit Mailbag — Getting A Handle On Direct-to-Consumer Programs

Congratulations and welcome back to Kings! It will be great to see their return to innovation and leadership in produce (and grocery) marketing.

Congratulations also to New Jersey farmer Alex Tonetta! He has been developing this idea of a ‘wholesale CSA’ operation for some time now and it looks like he has found a great partner to run with it.

While I applaud Alex and Kings for this innovative approach and wish them all the success in the world, I find it interesting to see a retail chain adopting a CSA model.

Working in ag extension since the 80s with an emphasis on direct and alternative marketing options for growers, we watched with amazement as grocers adopted bulk bins and open displays with a ‘farm market’ decor and appeal to attract those shoppers looking for connections with the local farmers.

Farm marketers have been innovators in direct mail (your suggestion of off-season, exotic CSA boxes has ‘fruit-of-the-month club’ written all over it), home-delivery enterprises, in-store bakeries and restaurants, which chains have adopted, as well. Some chains have even hosted a community tailgate market in their front parking lot to pull in customers looking for the freshest produce available, with the convenience of running into the store for the rest of the shopping list.

What I find most intriguing in this continued evolution in the produce industry is that farm-to-consumer direct marketing has never really been a threat to retail chains’ business. Optimistic estimates of direct marketing of farm products put the value somewhere between 3% and 5% of the retail produce industry. One USDA report, U.S. Fresh Produce Markets: Marketing Channels, Trade Practices, and Retail Pricing/AER-825 (see Today’s Produce Industry Figure 1.), shows figures between 1.5% and 1.7% in the late 80s/early 90s.

While I’ve never really seen it as a significant threat to any chains, it has been a significant and lucrative business model for small and beginning farmers. I guess it was only a matter of time, and of getting the right chain with the right farmers together, to bring the CSA to the chain level.

PS. This particular edition of the Perishable Pundit gave so much great commentary that I wanted to react to most of the articles — which you might not appreciate!

I did want to say, though, that your thorough analysis in the ‘Flawed Yale Study ...’ article was both refreshing and a great reminder of how easily the consuming public is now fooled by agenda-driven organizations (including the media) who only report headlines and sound bites. Your review of the study was probably more rigorous than was done by the scientific peers, and should be used in both journalism and science curricula to illustrate proper analysis.

We appreciate Rick’s letter. We would note that we suspect that direct-to-consumer operations have grown in significance, and substantially so, since the late 80’s.

The USDA didn’t even begin publishing a count of Farmer’s Markets until 1994. Since that time look at the graph: 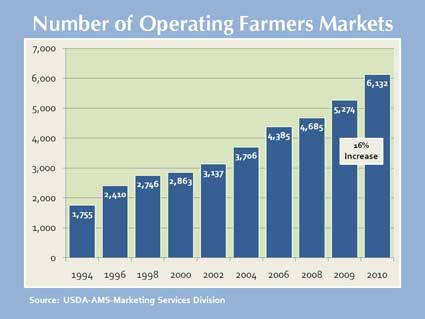 We would guess, though, that the number is higher than this. Farmer’s Markets have been around a long time, but the CSA movement has grown from scratch. The first CSA in America was opened just in 1984 — now there are over 12,000 in the US and they are opening quickly. Also the Internet expanded direct-to-consumer sales substantially. The Harry & David model depends on having brand and catalog, etc. But it is much easier today to promote a U-Pick or a mail order program through the Internet.

Today also there is a lot of business being done that is not, precisely, direct-to-consumer, but still avoids the traditional retail channel. Take an operation such as Annie’s Organics Buying Club in Miami, where the company delivers produce to a neighbor’s house or similar neighborhood spot that consumers have contracted for in advance. The organizers are not the farmers, so it is not direct-to-consumer, but it does avoid retail channels.

We wouldn’t be shocked if the real number wasn’t closer to 10% today.

But, and here is the dirty little secret of all this direct-to-consumer — we are not sure how much of this product is actually consumed. We’ve seen these CSA boxes and you have to be very motivated to really utilize all this product.

A family that has never bought a fresh turnip in their lives all the sudden gets several pounds each week for six weeks in a row. A family where nobody has baked in 20 years suddenly gets a 2-and-a-half-pound bunch of rhubarb, week after week. Some people start getting motivated and churn out pies, but Americans have gotten used to a diverse diet. Even if one likes rhubarb pie, they may want a banana crème the next day, not more rhubarb.

Obviously poor people may have to work with what they get if the CSA is a gift from their church or something like that, but we would love to see a study of how produce consumption changes when a family signs up for a CSA. The Pundit Poppa used to be fond of the saying, “Tis many a slip ‘tween the cup and the lip” … we suspect we might learn that there is a big gap between purchase and consumption, especially something like CSAs, where there is social pressure to join and one has to accept a grab bag of miscellaneous product.

Rick has been kind to contribute his expertise related to several stories, including these:

Troublesome Traceability Letters From PMA Veiled As Being Sent From Buyers

We are particularly appreciative he took the time to write this letter as he has been a little busy. Of course, working at Rutgers and the Cooperative Extension is a big job, but he has also been busy working with his highly talented daughter: 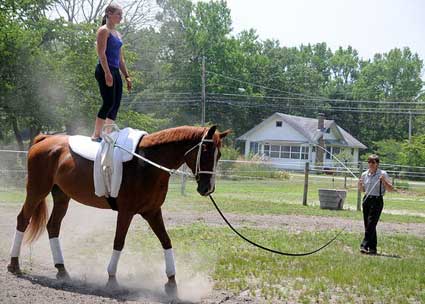 Annalise VanVranken is ranked 6th in the US for equestrian vaulting. She is spending her summer training for a spot in both the team and individual competitions at the Alltech FEI World Equestrian Games, which will be held Sept. 25-Oct. 10 in Lexington, Kentucky. We wish Annalise and her parents, Rick and Sheila, every good fortune.