Interesting piece in The New York Times entitled, Short on Labor, Farmers in U.S. Shift to Mexico. Although it doesn’t cite any statistics showing growth, it points to a WGA telephone survey that 12 of its members have 11,000 workers in Mexico. It also mentions a speech on the senate floor by Senator Dianne Feinstein, during which she displayed a map that highlighted 46,000 acres farmed by American companies in just two Mexican states.

The gist of the article is that whereas in the past, American companies farmed outside the US to avoid high land prices and to provide counter-seasonal product, now the efforts are designed to take advantage of an available labor force. The piece focuses on one particular American grower:

Tramping through one of his first lettuce crops near Celaya, an agribusiness hub in Guanajuato, Mr. Scaroni (Pundit Note: Steve Scaroni, Valley Harvesting & Packing) is more candid than many farmers about his move here. He had made six trips to Washington, he said, to plead with Congress to provide more legal immigrants for agriculture.

“I have a customer base that demands we produce and deliver product every day,” he said. “They don’t want to hear the excuses.” He acknowledges that wages are much lower in Mexico; he pays $11 a day here as opposed to about $9 an hour in California. But without legal workers in California, he said, “I have no choice but to offshore my operation.”

Steve Scaroni always winds up involved with the issue of the day. In 2004, when the focus in California was Worker’s Compensation reform, he had this to say:

Steve Scaroni, who owns Valley Harvesting & Packing Inc. in Heber, said he donated $10,000 to the initiative campaign because he feels strongly that reforms are badly needed. Scaroni has a supply of initiative petitions that he is delivering everywhere his company does business.

“We’ve basically driven all the profit out of operating a business in California,” said Scaroni, who has 1,500 employees in 100 different job classifications. “The system is in dire need of reform. Our workers’ comp rates have tripled during the past five years and we’re now paying more than $4 million a year in premiums.

“What’s happening is that many businesses that were once profitable are now only marginally so because of workers’ comp premiums,” Scaroni said. “That means less tax dollars for the state, less money to invest in new equipment and technology, no new employee benefits. The way the system is now, it’s very unpalatable to do business in California.”

And over two years ago, Steve was writing letters to the editor on immigration issues:

Just like Mr. Gibson, I also feel betrayed. I have worked 20 years to build an Agricultural Company from scratch. Now I am faced with having to close my business and lay off hundreds of legal USA workers because I simply can not find enough willing legal USA workers to do the low skill entry level harvest crews that Agriculture depends on.

Every one wants to get on the “send all the illegals back from where they came from” bus — but few understand the service and labor these folks have provided for the last several years when there were no legal USA workers to do these entry level jobs.

If all you “ship out the Illegal Aliens” folks get your way, please don’t complain if in a couple of years most all of your fresh fruits and vegetables have a Product of Mexico or China on the label! 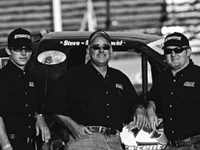 Steve seems an innovator, with a big logistics operation and even owning an Authorized Nextel Representative. Along with his sons, Matt and David, he is involved in off-road racing.

It seems as if what Steve is doing is completely sensible. The biggest concern most Americans would have is food safety but, on that point, Steve is reassuring:

…transferring to Mexico has been costly, he said. Since the greens he cuts here go to bagged salads in supermarkets in the United States, he follows the same food-safety practices as he does in California. Renting fallow Mexican land, he enclosed his fields in fences and installed drip-irrigation systems for the filtered water he uses.

He trained his Mexican field crews to wear hair nets, arm sheaths and sanitized gloves, and held drills on the correct use of portable toilets. In the clean-scrubbed cooling house, women in white caps scrutinize produce for every stray hair and dirt spot.

Yet the point of the article is that this is a problem. Steve feels he was forced into the decision:

Frustrated with experts who say that farmers with labor problems should mechanize, he plunges his hands into side-by-side lettuce plants, pulling out one crisp green head and one that is soggy and brown. After his company invested $1 million in research, he said, “We haven’t come up with a way to tell a machine what’s a good head and what’s a bad head.”

He also dismisses arguments that he could attract workers by raising wages, saying Americans do not take the sweaty, seasonal field jobs. “I know beyond a shadow of a doubt that if I did that I would raise my costs and I would not have a legal work force,” Mr. Scaroni said.

Yet it is not clear that those who are concerned about immigration will see the article as detailing a problem. After all, labor intensive work such as textiles has already mostly relocated outside the US. From this perspective the article is just recounting how a long term trend of low skill labor moving overseas is continuing in the produce industry.

The article mentions food security, but it seems unlikely the U.S. population will get too agitated over the possibility of a war with Mexico where the country will withhold food from the U.S. Some middle class jobs that support agriculture will be at risk, but it is unclear how many and, of course, presumably resources that had gone into growing will have other uses that will provide other returns. If farming in other countries is more competitive, U.S. owners might make additional money selling to other countries in Europe, Asia, the Middle East and elsewhere.

On food safety, American growers moving into countries seems encouraging, raising standards and, in a sense, creating islands of U.S. technology and techniques that US processors can access.

Still there is something a little unsettling about it, as there is with all Schumpeterian change.

Joseph Schumpeter was perhaps the most incisive thinker on entrepreneurs and capitalism to ever write. He is most famous for coining the term, “creative destruction,” to define how capitalism works by constantly destroying old ways of doing things to free up resources to do new things.

As he put it, all businesses must, at all times struggle “…to keep on their feet, on ground that is slipping away from under them.”

That is a tough analogy for a farmer but availability of labor, just like availability of land, capital and technology, are all ever-changing variables. One can certainly try to change laws to institute policies more favorable to farming, but smart growers such as Steve Scaroni know enough to hedge that bet.