McDonald’s is spinning its new promotion tied in with the release of the new movie Shrek the Third:

In the United States, McDonald’s is celebrating the arrival of “Shrek the Third” with its “Go for Green” message. The campaign showcases a variety of food choices including Premium Salads, Premium Chicken Sandwiches, fun desserts and a Happy Meal featuring Chicken McNuggets Made with White Meat, Apple Dippers (fresh, peeled apple slices with optional low-fat caramel dipping sauce), and low-fat white or chocolate Milk Jugs served in child-friendly containers with Shrek packaging to encourage consumption.

Its promotional efforts are paying off, garnering McDonald’s headlines such as Shrek on a Diet in McDonald’s Happy Meal Gig in a Reuters story:

“…unlike previous movie tie-ins, McDonald’s will use Shrek to feature its salads, milk, apple slices and other products introduced in the last 3 years as the No. 1 restaurant company faced mounting criticism its food was not only unhealthy, but also contributing to the increase in overweight kids in the United States. 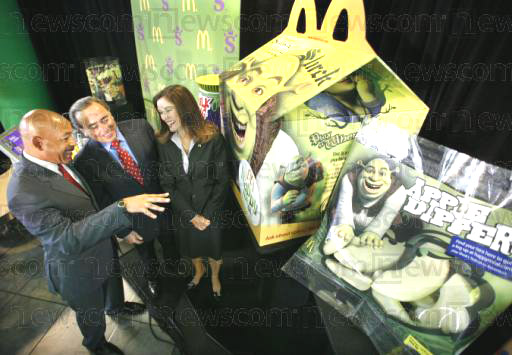 A Happy Meal with Apple Dippers, all-white-meat chicken McNuggets, and low-fat milk will be featured in television commercials and on posters in McDonald’s restaurants. Shrek will also appear on packaging for the milk and apples.

While the apples, milk, salads and other featured products have been on McDonald’s menu for more than a year, Chief Marketing Officer Mary Dillon said the company still had “opportunities to drive awareness both with parents and kids about these offerings.”

McDonald’s will also use Shrek to promote physical activity through games on its Web sites that require both online and offline play, Dillon said.”

One supposes it is a good thing for McDonald’s to promote apple dippers and milk as opposed to Big Macs and Coca-Cola. Still, the whole promotion raises troubling questions regarding marketing to children and our society kidding itself about the value of small incremental changes.

The “healthful meal” that is being promoted is chicken fingers, and the fact that McDonald’s points out that these are “white meat” chicken nuggets doesn’t make them any less breaded or deep fried.

Now, in its defense, McDonald’s publishes a comparison with other typical kid’s meals, and the Happy Meal being promoted shows up pretty well. Which may only tell us that all these things are bad and we need to feed children differently. 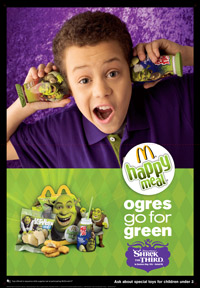 To some extent the whole promotion is a bit of a bait-and-switch. Promote the whole thing as “healthy” to entice parents in, then, once the kids get there, they are going to want things such as French Fries. In fact, a lot of the “healthy” nature of this Happy Meal is because they don’t give the kids French Fries.

It is telling that McDonald’s refuses to reveal what percentage of Happy Meals are sold with French Fries and what percentage are sold with apple dippers. In fact, one doesn’t have to order the healthier alternative to get the Shrek toys. Watch one of the TV commercials here in Windows Media or here in QuickTime. Notice it just promises a Shrek toy with any Happy Meal. 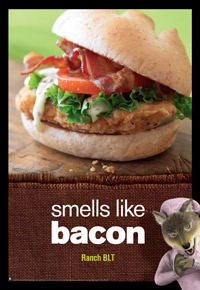 McDonald’s wants to focus attention on the healthful options available. And there are many. The Pundit has often thought of doing a movie that would be the reverse of the Supersize Me and show that he could lose substantial weight just by eating food from McDonald’s.

Yet it seems that the answer to healthful eating — for adults but especially for children — has to be more than just offer some healthy choices and rely on strong willpower.

We have to build a culture that supports healthy eating. Perhaps the Shrek toys should be a reward for selecting a special Happy Meal with grilled chicken, a vegetable and apple slices for dessert.

We pay so much attention to eliminating E. coli 0157:H7 from the food supply, yet many more people will die from diseases that are the consequence of obesity, especially childhood obesity.

McDonald’s is the dominant player; they should be the leader in working to build a healthy food culture for children. It is a good job to fill the next time they have a superhero to be employed in a promotion. After all, helping end the scourge of childhood obesity really would be a super achievement.