Tesco, Whole Foods And Wal-Mart Concepts Tested On Both Sides Of The Pond

With all the attention being paid as Tesco Comes to America, it is worth noting that ever since Safeway sold its U.K. operation in 1987, the trend has actually been the other way, with U.K. retailers bailing out of America and U.S. retailers making inroads in the U.K.

Marks & Spencer sold the New Jersey-based Kings to a private equity group. J Sainsbury was Britain’s largest food retailer — the position Tesco holds today — when it purchased Shaw’s in 1983. It traded for two decades and bought up competitors and additional stores. Then in 2004, J Sainsbury abandoned America and sold Shaw’s to Albertson’s.

In contrast, Wal-Mart acquired ASDA in 1999 — a major buy of the third largest supermarket chain in the U.K. This entry in the U.K. market followed Costco’s opening of its first U.K. warehouse in late 1993 — it now has 20 warehouses in the U.K., including a new one in Chester.

Now Whole Foods is preparing for its launch in the United Kingdom and the International Herald Tribune reports on the subject with a piece entitled, Whole Foods Hopes Its Organic Chic Will Sprout In London.

There is both a macro and a micro question that will play out in this launch.

The macro question is whether the U.K.’s more intense focus on environmental and human rights issues will play in Whole Food’s favor or not? Although intuitively it seems that consumers who focus on these issues will be consumers attracted to the Whole Foods’ offer, the greater saliency of these issues with the consuming public means that mainstream retailers in the U.K. have addressed these issues to a far greater extent than mainstream U.S. retailers.

There is also some question as to whether, inherently, Whole Foods won’t represent to the “green” consumer a hostile “big organic” approach that is really counter to the trends in the U.K. that include highly local buying and ecologically diverse box schemes.

Whole Foods is, of course, well aware of all this. They purchased a chain of organic-oriented stores called Fresh & Wild back in 2004. 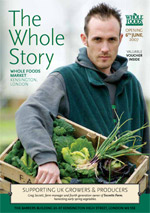 In fact if you look at the brochure they have put out for the first U.K. store under the Whole Foods name, you will see — as in the front cover we reproduce, at left, with the banner across the bottom of the page — the phrase “Supporting UK Growers & Producers,” which is an interesting twist on locally grown because parts of France are closer than parts of the U.K. It lends some credence to those who see the promotion of the locally grown movement as a form of protectionism.

Much like politics, though, all retailing is local. And the success of this particular new store is likely to depend on its location and execution. At 80,000 square feet, the store is the largest food store in London. Whole Foods has both an organic/environmental/ethical side and an epicurean side. It would be surprising if the store wasn’t a feast for the senses. One presumes it will be a larger version of the Whole Foods store in Columbus Circle in New York City, with the added advantage of not being located in a basement.

One sign that it will be done right, the International Herald Tribune piece indicates that Whole Foods is interpreting North Atlantic quite broadly and has sent over David Doctorow, Vice President of Whole Foods’ North Atlantic region, to help get the store going. David Doctorow is one of the most experienced experts in the retailing of organics, and we go way back with David, as PRODUCE BUSINESS, a sister publication of the Pundit, ran a profile of Bread & Circus back in 1991.

David was the Produce Coordinator of this Boston-based natural food retailer, which was famous for a red, yellow, green merchandising approach with green meaning organically grown, yellow, transitional and red, conventionally grown produce. Eventually Bread & Circus was acquired by Whole Foods and, not least among the assets acquired in that acquisition was David Doctorow.

The International Herald Tribune article questions the viability of such a large store in congested Central London, especially without parking. But these urban stores are almost better thought of as restaurants with a store attached than as supermarkets. The money is going to be made in the prepared foods section, in the cafes and coffee bars. The fresh produce, fish, fowl and meat are as valuable for the halo effect of freshness they impart to the prepared foods offer and the in-store restaurants as for the sales they generate themselves.

Which all sets up a rather unusual situation. Tesco is coming to America to bring British-style prepared foods — broad array and good quality, but mostly merchandised in small, conveniently located stores — at virtually the same moment Whole Foods is bringing to London American-style high-end prepared foods sold against an expansive backdrop of specialized food and drink bars — coffee, sushi, etc. — and colorful fresh produce.

Who will be right? Tesco or Whole Foods? Or are both right, Tesco for more mainstream places and Whole Foods for densely packed urban venues? In the end, success or failure may come down to details. Can Whole Foods get the right Indian seasoning in its High Street Kensington store? Can Tesco get just the right ribs going in those Arizona locations?

If Wal-Mart’s problems teach us anything, it is that retailing is, to paraphrase Edison, 1% inspiration and 99% execution. Best of luck to Whole Foods and Tesco and Wal-Mart too, as they try to execute their best laid plans.