We always knew Paul Kneeland was destined for big things. After all, when PRODUCE BUSINESS magazine, in conjunction with the New England Produce Council, began bestowing our annual Retailer of the Year award, he was the very first person so named.

You can read the award citation here. 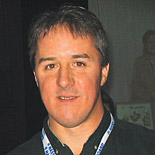 Now Paul, longtime Director of Produce/Floral at Roche Bros. Supermarkets, as well as a founding board member of the New England Produce Council, has accepted the position of Vice President of Produce & Floral for Kings Supermarkets, headquartered in Parsippany, New Jersey.

Though leaving Roche Bros. — where he started as a part time clerk in 1981 — and resigning from the New England Produce Council must be bittersweet, the opportunity to run produce and floral for Kings is an exceptional opportunity for Paul.

And his hiring is a good sign for the industry at large.

There was a time, back when Kings was owned by the Bildner family and run by Allen Bildner, that it was one of the most innovative chains in the United States. It had a store manager training program second to none (one of the graduates of which is Lee Smith, publisher of Pundit sister publication DELI BUSINESS) and was responsible for many innovations in fresh foods and ethnic marketing.

In produce Kings pioneered the Jersey Fresh program, was a leader in introducing a full specialty produce line from Friedas and was unique in instituting a taste-based produce testing program in which many items were brix tested. Even if competition carried the item, Kings would not put it on the shelf if it didn’t have the sugar.

Kings was also a pioneer in food safety, putting in a strict two-day coding system on all prepared salads.

After the chain was sold in 1988 to Marks & Spencer, the British retailer, the chain stagnated, so it is good news that following Marks & Spencer’s sale of the company to an investor group, the new owners are seeking such great talent. It bodes well for the possibility that this chain can once again be a font of industry innovation.

Best of luck to Paul and to Kings. We look forward to great things.