It was only in 1999 that USA Pears gained access to the New Zealand market. Now it is the 9th largest export market for American pears. To celebrate and thank the local trade, a dinner themed “Great mates” was held and even the United States Ambassador attended: 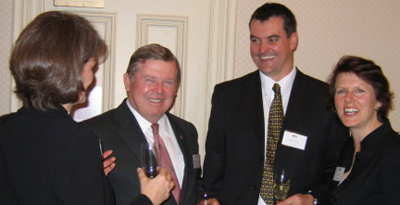 As harvest for the fresh USA Pears grown in Oregon and Washington is underway, U.S. Ambassador to New Zealand Bill McCormick joined in a dinner that recognized the country of New Zealand’s importers of pears. Ambassador McCormick, a longtime resident of the Pacific Northwest and co-founder of the upscale McCormick and Schmick’s national restaurant chain founded in Portland, Oregon, has a connection to U.S. grown pears as 84% of the American fresh pear crop is grown in Oregon and Washington.

The theme of the dinner was “Great Mates,” and New Zealand’s importers were recognized for the critical role they play in making fruit imported from the U.S. a success. California Summer Fruit and California Grapes were also included in the special reception. The event was held the eve of the opening day of the Foodstuffs industry trade show at the Caccia Birch House, an historic residence in Palmerston North, New Zealand.

Much recognition is indeed due to New Zealand’s traders, as they have helped the Oregon, Washington, and California fruit industries achieve record success in the New Zealand market. Imports of pears in particular have increased from 2,200 standard box equivalents imported in the 2001/2002 pear season to over 60,000 boxes in the 2006/2007 pear season, which equates to an increase of over 2,500% of USA Pears imports to New Zealand.

“New Zealand is an exciting growth market for Northwest Pears and with Ambassador McCormick’s ties the Pacific Northwest, he was a perfect spokesman to kick off the new season,” said Kevin Moffitt, president and CEO of Pear Bureau Northwest.

Lisa Cork, the marketing representative for USA Pears in New Zealand, quoted Will Rogers as she summed up the importance of the dinner. “Will Rogers said, ‘go out on a limb; that is where the fruit is.’ As a result of this special dinner, we hope New Zealand’s importers realize their contribution to the American fruit industry. Their willingness to ‘go out on a limb’ to send fruit to a market at the bottom of the world is appreciated by growers, the industry, and the U.S. Ambassador.”

The New Zealand kick off event was the first of many such events and promotions that are underway as the new crop of USA Pears enter the international markets. Campaigns such as billboard advertising in Mexico and Russia as well as importer incentive contests and consumer samplings will be conducted in over 35 markets worldwide. With a crop that is expected to be slightly larger than last year, the industry is looking forward to an excellent export season. “There are many issues in our favor this year from a weak dollar in many markets which helps exports to smaller pear and apple crops in Europe and a U.S. pear crop that will meet the needs of all export markets,” stated Moffitt.

Northwest grown pears are actively promoted under the USA Pears logo in over 35 markets worldwide. International marketing representatives develop and maintain promotions for USA Pears with activities targeted for each country’s market. Approximately one-third of the fresh Northwest pear crop is sold outside of the United States, with Mexico, Canada, Brazil, and Russia topping the list of export markets. New Zealand is currently the ninth largest export market for USA Pears.

A lot of credit to go around. Lisa Cork represents USA Pears in New Zealand and is widely praised for running an effective program. Jeff Corea is the international Marketing Director and, along with Leyla Kabasakal, the International Marketing Assistant, they run one of the most aggressive export programs of any U.S. produce trade group.

One reason may be because Kevin Moffitt, president and CEO of Pear Bureau Northwest, had Jeff’s job before he was promoted, so he has particular awareness and sensitivity to the development of international markets.

We’ve known Kevin for many years, but the image that will always stick in the mind of the Pundit is when we were both in Cuba and Kevin was manning the USA Pear booth, trying to give out samples. The line was endless and most of those in line had never seen a pear. Kevin used that pear slicer like a machine gun as he pounded out the slices and spread the gospel of USA Pears.

Now, apparently, they are spreading the message to the opposite end of the globe. Congratulations to the team at USA Pears and many thanks to the trade in New Zealand for being open to the fruit. And kudos to Ambassador Bill McCormick for standing up for USA Pears and the American produce trade.