George Washington, Winston Churchill And
Volodymyr Zelensky
In the Ukraine:
A Hero Arises To Change The Course Of History 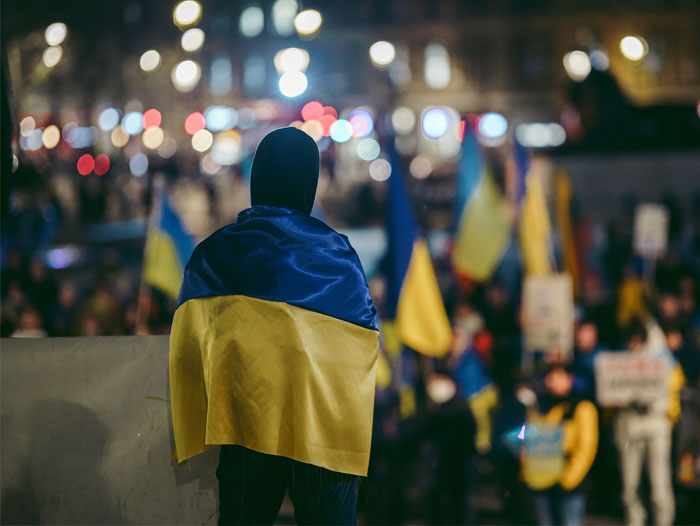 As the Declaration of Independence was being prepared, George Washington issued General Orders on July 2, 1776 from his headquarters in New York: “Let us therefore animate and encourage each other, and show the whole world that a Freeman, contending for liberty on his own ground, is superior to any slavish mercenary on earth.”

Following the Dunkirk evacuation, the fall of France and The Battle of Britain, shortly after the attack on Pearl Harbor, Winston Churchill came to North America both to engage with his country’s new ally in the war, the United States, and to visit its long-standing ally, Canada. Speaking to the Canadian House of Commons on December 30, 1941, he told a story, speaking of the French government as he urged them not to surrender.

He explained: “When I warned them that Britain would fight on alone whatever they did, their generals told their Prime Minister and his divided cabinet, ‘In three weeks, England will have her neck wrung like a chicken.’ Some chicken! Some neck!”

Recently, the United States offered to evacuate Ukrainian President Volodymyr Zelensky from the Ukraine as it is believed that Russia has made him a target. His response: “The fight is here; I need ammunition, not a ride.”

So, a world class historic hero was created. He may yet pull out a victory; he may be killed. But, already, his decision to stay and fight has changed the course of history. Russia has many weapons, but it is a relatively poor country. Russia shows up 11th on the rankings of nations by Gross Domestic Product (GDP). That puts it behind countries with much smaller populations such as Canada  and South Korea. On a per capita basis, Russia is ranked 85th in the world, which puts in behind countries such as Costa Rica, Panama and China.

Zelensky’s decision to stay, to risk his life and possibly that of his wife and his children has inspired his own countrymen to keep fighting and inspired the world to help him.

He may yet have to leave, to set up a government in exile as Charles de Gaulle and others did during World War II, but because Russia is so poor, it will be hard for it to sustain battle for long and, even if it wins, a people inspired as the Ukrainians have been will likely keep on fighting through a guerilla war. It was not all that long ago that the old Soviet Union had to withdraw from Afghanistan because, although the Soviet Union had more than 100,000 troops in Afghanistan — a country that, at the time, had a population of less than fifteen million people — Russia could not pacify the country. Ukraine has about triple that population. Russia might have to station perhaps half a million troops in the Ukraine to simply keep things stable.

I’ve never been to the Ukraine, but a delegation once approached me asking if I would set up one of our produce trade shows and conferences there. They had been to our other events and thought it was just what they needed. It never happened, but, maybe, after the war, we will find a way! I would like to help the people of the Ukraine.

As the artillery is fired and the bombs drop, I have another thought… My great-grandfather, Jacob Prevor, emigrated to the United States and opened a produce wholesaling operation in the Wallabout Market in Brooklyn, NY. In time, his son, my grandfather, Harry Prevor, moved the business to the Washington Street Market in downtown Manhattan, and my father, Michael Prevor, moved the business again and made us opening-day tenants at the Hunts Point Market in the Bronx, NY.

Long before all this, before he emigrated to the United States, Jacob Prevor was a substantial produce wholesaler outside Kiev, as was his father and generations before him.

Yet they were not Ukrainians. They were part of the Jewish Pale of Settlement, which was where the Russian Empire required that Jews live for over a century. Jews were considered to have their own nationality. Their language was Yiddish, and I was told that because he was in business dealing with the general population, my great-grandfather also spoke Russian and Ukrainian and studied up on English in preparation for a move to America. Perhaps a defeat of the Russians will bring closure to my family history and give me reason to visit Kiev to search for my great-grandfather’s stomping grounds.

The truth, however, is what Putin is doing is not new; it is very old. We find it shocking because no such thing has happened in living memory for most people alive. Yet, countries gobbling up their neighbors has been happening since time immemorial. We live in an extraordinary pause of history. Had Volodymyr Zelensky not been there, had the Ukrainians simply surrendered, the rest of the world, while saying it was terrible, would have just said “there is nothing we can do” and gone on. Now weapons are moving to the Ukraine, sanctions are being imposed against Russia, Putin and those close to him.

The battle is more important than most realize. Yes, because almost 45 million Ukrainians have their future in balance but, also, because all over the world people are watching. In China, the leadership asks, “How would the world respond if we invade Taiwan?” What they see in Ukraine will provide an answer to that question.

The answer to the question will tell us what they will do next. It tells us whether the world will go back to commonplace wars, now with a nuclear accent, or whether we have actually reached the end of history.

Francis Fukuyama brought this term back into currency with a brilliant essay that claimed that with the defeat of both communism and fascism, there was no longer any serious competitor against market capitalism and democracy as a way to order society. Is what is going on in Ukraine a last gasp for a system that cannot win? You can be sure China is watching.

Special Note: Jim Prevor will be hosting a special dinner at The London Produce Show and Conference for those who would like to discuss the situation in the Ukraine. With luck it will be favorably resolved by then and, in any case, we will discuss the after effect of the war and the future. If you are interested in joining the dinner, please make sure you are registered for the London Produce Show and Conference here and let us know here that you would like to attend the dinner and further information will be forthcoming.