In a case of, at least partially, what Yogi Berra called deja vue all over again, we have word that David A. DeLorenzo has been named President and Chief Executive Officer of the Dole Food Company: 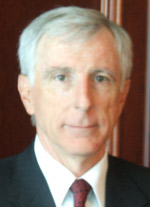 WESTLAKE VILLAGE, California — Dole Food Company, Inc. announced that it has named David DeLorenzo as its new President and Chief Executive Officer. Mr. DeLorenzo has been associated with Dole for over 37 years, and is currently serving on the Board of Directors and chairs the Audit Committee. David DeLorenzo has held various executive positions at Dole including President, Chief Operating Officer and Vice Chairman of the Board.

David H. Murdock, the owner of Dole, previously acted as Chief Executive Officer and will remain Chairman of the Board. Mr. Murdock commented that, “We are pleased to have David undertake this expanded leadership role in the company. His knowledge and experience in the industry are unprecedented.”

Dole Food Company, Inc., with 2006 revenues of $6.2 billion, is the world’s largest producer and marketer of high-quality fresh fruit, fresh vegetables and fresh-cut flowers. Dole markets a growing line of packaged foods and frozen fruit and is a produce industry leader in nutrition education and research.

David was President before, but we think this is his first go around at CEO.

As the largest marketer in the industry, Dole’s actions are immensely important to the trade. During the spinach crisis, it was often the leadership of Eric Schwartz, President of Dole Fresh Vegetables, Inc., that helped move the industry to act on the California Marketing Agreement.

And, as we discussed in this profile of David H. Murdock, Dole’s Chairman of the Board and owner, Mr. Murdock has a deeply passionate vision of the role that Dole and the produce industry at large can play in enhancing the health of people in America and around the world.

Over many years responsible for some of the most stalwart support of 5 a Day, Dole has produced some of the most innovative produce promotions, including recently, an unprecedented tie-in with the Curious George movie.

We are sure the associates at Dole are thankful to have a known commodity, and we wish David and Dole much success as David A. DeLorenzo assumes his new position.