When we unveiled the plan for collaboration between the FRESH PRODUCE CONSORTIUM in Britain and PRODUCE BUSINESS magazine in America to establish a new industry event, we believed it would serve a vital industry need:

“London is an iconic city for many reasons, not only in the UK and Europe, but in global terms,” said FPC chief executive Nigel Jenney. “As home to around 11 million people and one of the most culturally diverse populations in the world, as well as some of the most widely recognised tourist attractions on the planet, it has a huge year-round demand for the full range of fresh produce.

“The UK fruit, vegetable and flower market has long been perceived as a dynamic thought and practice leader for the fresh produce industry. This event will highlight everything that is still great about the British produce industry, but it is also a brand new trade exhibition, conference, networking event and showcase for the global industry as a whole.

“The show will bring together buyers from the retail, wholesale and foodservice sectors, as well as grower/exporters and suppliers from around the world and put the UK and Europe back in the limelight as a key global destination for high quality fruit and vegetables.”

…We want to help producers and marketers get their messages out to a wider audience and bring them together with the people who matter most to them – their existing and potential customers. At the same time we want to give the buying segment of the trade a convenient venue, right in central London, where buyers can engage with the global supply base.

Jim Rogers, president of FPC, said: “From a UK industry perspective, this is exactly what we need to give us some much-needed impetus after a few difficult trading years. The show will bring together growers, exporters, importers and buyers from all sectors of the industry, all over the world and highlight the incredible depth of talent and knowledge that we still have in the UK, despite our best efforts to downplay it in recent times.”

And Andrew Garton, category director of produce and horticulture at Wm Morrison and a member of the FPC board, also welcomed news of the event. “Any event that attracts the world’s fresh produce industry to the UK is good news for our domestic industry as a whole… In my opinion, the UK supermarket sector has led the world in food retail innovation during the past two decades and we’re keen to take advantage of this opportunity to reaffirm our credentials with the industry’s leading suppliers.”

Jim Prevor, editor-in-chief of Produce Business and known internationally as The Perishable Pundit, said: “The people of New York and London have always enjoyed a close link. We have had an incredibly uplifting experience introducing a show to New York over the past four years with the Eastern Produce Council. We are delighted to be working with FPC to deliver The London Produce Show and Conference to a city and country that is lacking such an industry event.

“Our aim with The London Produce Show and Conference is to link European buyers with a new global supplier base and allow growers, exporters, importers and suppliers to talk directly with their target audience, while also giving visitors and exhibitors the opportunity to enjoy the magnificent city of London,” said Prevor.

We have been exceedingly busy since that announcement. We now have maxed out the capacity of the 5-Star Grosvenor House with a trade show of 127 stands hosting over 150 companies and organizations plus an amazing assortment of workshops, seminars and chef demos. We have student programs for culinary, business and horticultural students, media programs and more to unveil at the 5-Star Grosvenor House next week.

One quite extraordinary thing is how the show has come to sit at the nexus of local support, intellectual leadership and global participation.

Attendees will come to see this clearly on Thursday morning when we present the keynote breakfast, which highlights a selection of thought-leaders both from Britain and beyond. Yours truly will engage these thought leaders in a spirited discussion on the state of the industry, the opportunities that change is creating, and how we can work together to enhance our mutual success.

We are thrilled to announce that the following insightful authorities are scheduled to appear in the Perishable Pundit’s “Thought Leaders” panel. This is the marquee presentation at the general assembly breakfast on Thursday morning the 5th of June, 2014:

James Anstead is a Director within Equity Research at Barclays, based in London. He is responsible for the firm’s coverage of the European food retail sector and has spent 15 years in the retail sphere. James joined Barclays in June 2009 from Citi Investment Research (where he led the European Food Retail team), and prior to that, he was at PricewaterhouseCoopers. The Barclays team has been consistently rated as among the leading sell-side research investment teams on the food retail sector.

Andrea Felsted has been at the Financial Times for 15 years, the last five of which have been spent covering retail as the Senior Retail Correspondent. She has a first class degree in Social and Political Sciences from Cambridge University and an MBA from Cass Business School.

Doug Gilchrist spent the initial part of his career in hotel management, gaining experience at Gleneagles, The De Vere Belfry and two 5-star hotels in Australia. The move to buying and sourcing food rather than cooking and serving it was a logical move for Doug, who now heads up the Supply Chain for Gather & Gather in the UK. Doug also chairs the company’s Sustainability Working Group, and has driven Gather & Gather’s alignment approach to sustainability and supply chain practices, which recently received nominations at the Cost Sector Catering Awards.

Jannie is a native from Namibia, and grew up on a cattle farm. He studied at the University of Stellenbosch in South Africa, received a bachelor degree in social science and later an MBA. He has worked in retail since 1972 in South Africa, initially in textiles and, since 1994 in food retail and was a director in Shoprite Checkers until joining Spinneys in 2012 in the UAE as CEO. Jannie has spent most of his time in the procurement and operational side of retail. Spinneys has 64 stores, sales of $800 mil and employs more than 3000 people in the UAE and Oman.

An industry veteran for more than 29 years and  previously the Director of Produce and Floral for Roche Bros. Supermarkets in Boston, MA, Paul has been in his position at Kings since June 2007. In addition to overseeing produce and floral for 24 Kings Super Markets in New Jersey and one store in Long Island, Paul also oversees produce and floral for Balduccis Food Lover’s Markets with stores in Connecticut, New York, Maryland, and Virginia.

A graduate of Wye College, Chris Mack worked for an apple grower before joining M&W Mack Ltd in 1978. The fourth generation of his family to join the business, Chris worked in the company’s wholesale division and all around its fast-growing supermarket supply business before he became managing director in 1988. Under his leadership, parent company Fresca Group was formed in 2005, allowing the business to undertake a progressive programme of acquisitions and strategic joint ventures. Still privately-owned, the companies in the Fresca Group now handle fresh produce sales of some £430m. They have ventured into growing too – most notably through the Thanet Earth greenhouse development in Kent, England, a £120m investment in British horticulture.

Gary Marshall entered the wholesale market trade as a junior salesman at 19 years old and started Bevington Salads in 1987 at 26. Since 2005, Gary has served the market’s tenant community as Chairman of the Covent Garden Tenants Association at the Vauxhall-based fruit, vegetable and flower wholesale market, New Covent Garden Market. His tenure as Chairman has been busy and at times challenging – as the CGTA has been involved in planning the redevelopment of the market for the past eight years. 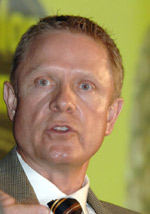 As the former Senior Vice President of Perishables at Wal-Mart Stores, Inc., Bruce is a 43-year veteran in the produce industry. He started his food-industry career bagging groceries in his hometown of Detroit, Michigan in 1970, later working for several notable supermarket chains, and owning and operating a wholesale produce company. He joined Wal-Mart as Produce Director in 1991 and spent 17 years with the company. He is now President of Peterson Insights, Inc., a consulting company helping fresh food companies successfully navigate through a wide variety of complex challenges.

Tony is a third-generation greengrocer who has been involved with the family business since childhood, initially working the market stall in Ridley Road, Hackney. After an early career in banking at Barclays, Tony joined the family business alongside his father Dave in 1988. Since then, he has driven the rapid expansion of Reynolds to the multi-million-pound company it is today.

Adam is joint Managing Director of Organic Farm Foods, the UK’s biggest organic-fruit wholesaler, a £26 million business, supplying the main UK supermarkets with imported organic produce which they sell as fast as he can supply it. Actually it’s in his blood — his father has a large apple farm.

Valentine Warner trained as a portrait painter before putting down the brush to pick up the spoon. He worked in London restaurants for eight years before setting up a private catering company, Green Pea. A passionate cook, author of four books and a popular TV chef, Val also writes columns for Countryfile and Delicious magazines.

All of us at the FRESH PRODUCE CONSORTIUM and PRODUCE BUSINESS are deeply appreciative of the fact that leaders on this level, whose time is always in demand, have made The London Produce Show and Conference a priority.

We hope you will as well.

If you would like some additional information, here is a small brochure we prepared.

You can register for the London Produce Show and Conference right here.

Finally, though the exhibition hall is sold out, we still have some wonderful opportunities for sponsors to step in and become Charter Sponsors. If you would like to receive more information on how your organization can be part of this great new industry institution, please let us know here.