An interesting study done by researchers at the California Institute of Technology and Stanford University, entitled Marketing Actions Can Modulate Neural Representations Of Experienced Pleasantness, may hold some interesting implications for marketers:

Despite the importance and pervasiveness of marketing, almost nothing is known about the neural mechanisms through which it affects decisions made by individuals. We propose that marketing actions, such as changes in the price of a product, can affect neural representations of experienced pleasantness. We tested this hypothesis by scanning human subjects using functional MRI while they tasted wines that, contrary to reality, they believed to be different and sold at different prices.

Our results show that increasing the price of a wine increases subjective reports of flavor pleasantness as well as blood-oxygen-level-dependent activity in medial orbitofrontal cortex, an area that is widely thought to encode for experienced pleasantness during experiential tasks. The paper provides evidence for the ability of marketing actions to modulate neural correlates of experienced pleasantness and for the mechanisms through which the effect operates.

It is not really surprising that consumer perception could be altered in this way, what is intriguing, though, is that these researches actually found an increase in “…blood-oxygen-level-dependent activity in medial orbitofrontal cortex, an area that is widely thought to encode for experienced pleasantness during experiential tasks.”

In other words, it is not just that the subjects said they enjoyed the more expensive wine more than the cheap one — they actually did on a physical level.

The authors theorize that a “taste expectation” leads to increased activity in this area of the brain.

We read the study as a massive defense of branding:

Our results have implications for several disciplines. First, the EP (experienced pleasantness) signal plays a central role in neuroeconomics, because it serves as a teaching signal that guides future behavior. Unfortunately, very little is known about the factors that affect the neural computation of this signal. A natural starting hypothesis is the economic view, which states that EP depends only on the sensory properties of the item being consumed (i.e., its molecular properties) and the state of the consumer.

Our results suggest that the brain might compute EP in a much more sophisticated manner that involves integrating the actual sensory properties of the substance being consumed with the expectations about how good it should be. It is important to emphasize that it might be adaptive for the brain to do this. To make good decisions in the future, the brain needs to carry out good measurements of the quality of current experiences. In a world of noisy measurements, the use of prior knowledge about the quality of an experience provides additional valuable information….

We take this as claiming that effective branding, which pre-conditions someone to expect a more pleasant culinary experience, can not only change customer expectations, but, in doing say, actually change the customer experience.

In a sense marketing and branding activities, themselves, become value added.

Obviously many more studies need to be done, and it will be fascinating to see if the same holds true in other areas of pleasure — does one enjoy a Four Seasons resort more because some pleasure center in the brain uses expectations to start the body relaxing? Does Itzhak Perlman please in part because we expect him to?

It is nothing new in marketing to know that your reputation can be sullied by discounting. This study is suggesting something else.

Perhaps consumers, for example, really do experience organic produce as tasting better. This study provides an explanation of why the higher priced organic product — though indistinguishable in a blind taste test — might actually deliver a superior eating experience.

It also suggests that discounting a product may not only reduce consumer expectations as to the quality of the product, but actually reduce the satisfaction of the eating experience.

This fascinating study is filled with implications for not only biology but economics, psychology, business and marketing. 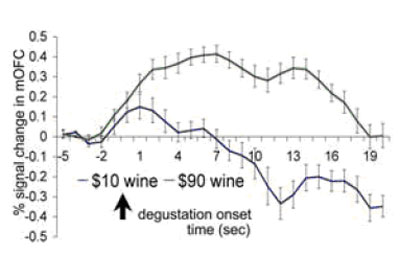 (Graphic provided by California Institute of Technology and Stanford University)