Whole Foods has come out with a new marketing program called “Responsibly Grown” — the only problem is that it is a really irresponsible thing to do.

The program consists of an Unrated, Good, Better, Best system — with the implication that produce deserving a non-existent “bad” rating must be the stuff sold at other retailers. Here is what they are doing: 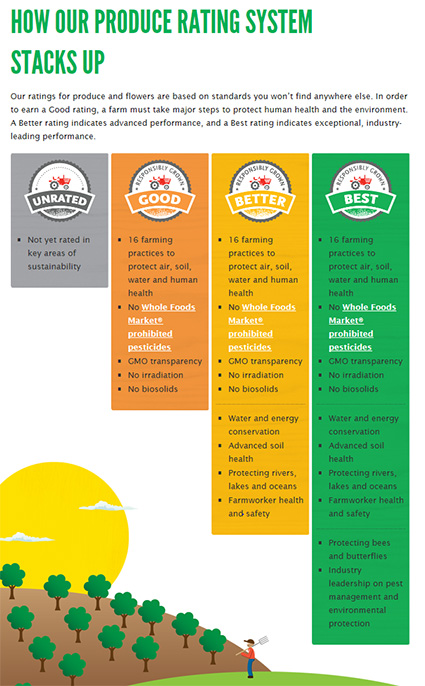 Part of the problem is that the standards are not very transparent, with cryptic descriptions such as “water and energy conservation” qualifying growers for Better and Best standards.

Part of the problem is that no third-party is auditing any of this, so who even knows if the claims are true.

Then there is this issue of the special Whole Foods Prohibited Pesticides. Some of it is just odd. For example, the first prohibited pesticide is expressed this way:

Adherence to US EPA Registered Pesticides and Label Restrictions– For product sold to Whole Foods Market, all suppliers may only use pesticides that are registered for use by US EPA in a manner consistent with the US EPA-approved label, regardless of where the product is grown.

This is a grand statement, but “adherence to US EPA Registered Pesticides and Label Restrictions” is, in fact, the law. The California Department of Pesticide Regulation explains it simply:

“All food sold in the U.S. must meet the same safety standards.”

Beyond this kind of basic problem, this is an odd list because it treats individual pesticides as some kind of silver bullet killing sustainability. But that is not the way it works. Let’s agree, for the sake of argument, that the pesticides Whole Foods is banning are bad. But eliminating them doesn’t make the produce or the environment better. Perhaps to compensate for the loss of the single most effective pesticide, growers will have to use twice as much of a less effective pesticide. Is that better for the environment? Worse? What is the impact on worker health? None of these questions are easily answered; they require extensive case-by-case studies, yet Whole Foods is grabbing headlines by announcing bans.

They are certainly getting press… an AP story was headlined, Whole Foods to roll out ‘responsibly grown’ rankings for produce, but the market doesn’t seem to be oblivious to what might be behind this effort:

Whole Foods is trying to draw a sharper distinction between itself and its competitors, in part by making shoppers feel more empowered about their purchasing decisions. The grocery chain already has ranking systems for meat and seafood, which takes into account animal welfare and sustainability standards, respectively.

Whole Foods, based in Austin, Texas, has nevertheless seen its sales growth slow as traditional supermarket chains and big-box retailers have muscled in on the market for organic and natural products. To hold onto customers, executives have said they plan to more clearly state what makes Whole Foods stores different.

Emphasizing the unique characteristics of a store is a great idea, but in praising one’s own procurement standards, it is not right to imply that all the other produce in the world is not responsibly grown, especially when the evidence to support such a proposition is basically zero.