We just ran a piece, Arugula Shines At White House Dinner, that focused on the use of items grown in the White House Garden at the first State Dinner honoring the Prime Minister of India.

Now the Food Network presented a Super Chef Battle that was built around fall veggies from the White House garden as the “secret ingredient”.

The garden is very impressive including a section devoted to growing the same varieties Thomas Jefferson grew. And any talk of fresh produce is a positive, especially when the talk is given by a stunning First Lady in a bright orange dress with a full 1950’s-style skirt, a turquoise cardigan and teal blue shoes. 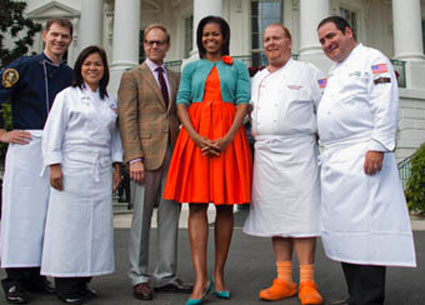 And the dishes presented really opened up the mind to the possibility of using fresh produce in a whole new way. The winning team, which — surprise, surprise — included the White House Executive Chef, produced stunners such as broccoli-based clam “chowder” and a collard green tamale. You can see a video of the winning team presenting their dishes to the judges here:

Of course, this garden — 1100 square feet — takes 15 volunteers a week plus five full-time chefs and who knows how many gardeners to maintain. It is beyond the realm of possibility for most people. And these dishes, though cooked in less than an hour, are unlikely to be cooked by very many people.

Still many more gourmet cookbooks are sold than gourmet meals are cooked and if shows like this stir the aspirational juices, that is a win for the industry. Many a man is drawn to an auto dealership by a red convertible sports car but leaves the dealership with a blue sedan, so if dreams of broccoli “chowder” entice people to the produce department and they leave with some broccoli florets, that is all for the good.

We had three problems with the show:

First, with the whole focus being health and nutrition, we wonder if the chefs couldn’t have laid off the deep fryer and rich sauces.

Second, the truth is that the produce used in the cooking was not harvested from the Washington, DC garden. The produce was purchased from the usual sources that the Food Network uses, so all the oooing and aahing for the freshness of the ingredients by the judges was for commercial produce, a fact not pointed out to the television audience.

Third, what is with Mario Batali? We know he has made short pants his trademark, but a little respect for the White House and the First Lady would dictate putting one’s self promotion aside for a day and putting on a pair of pants.