When Elmo Is Crying –
Will The Sesame Street Brand Be Used To Market Sub-standard Product?
Is The Legal Minimum An Acceptable Food Safety Standard When Promoting To Children?

Our piece, IMAGINE-NATION: Will The First Lady’s Sesame Street Campaign Reduce Produce Consumption, brought lots of calls and comments. They were universally unhappy about the program and universally saw no upside for themselves in going on the record. One former chairman of one of the national produce associations sent this note:

I’ve had a few people ask about the PMA/Sesame Street initiative so I have forwarded your URL to them saying that you covered the subject far more completely than I could.

Having said that, I re-read your post and thought that there was one more additional consideration about the program. It struck me as I was reading that the Sesame Street initiative has all the hallmarks of the launching of the 5-a-Day program and subsequent programs by the Produce for Better Health Foundation. Again, a wonderful message that has not moved the needle on consumption one iota these many decades later.

One needs to ask why PBH has been relatively ineffective. While there are a plethora of reasons, I think the overriding one is the fact that the logo and message became instantly ubiquitous. Everyone’s brand is no one’s brand. I remember having a conversation one day with the produce director of a very large supermarket chain when 5-a-Day had just come out decades ago. I asked him why they didn’t jump into the PBH program as heavily as many other national/regional chains.

His answer seared into my memory as a life lesson on many other produce marketing issues over the years.  He said, “My boss hires me to promote produce for this chain, not to promote produce for the industry. I am judged on whether I beat the competition, not whether I perform a public service for PBH.” Sure, that was a pretty bare-knuckles answer, but it was the kind of candid comment that gets shared among industry leaders to prevent runaway trains (which PBH has become in my opinion).

Fast forward to October with the Sesame Street announcement. I fully agree with all the points that you brought up. Additionally, I think it is a REAL danger for the Children’s Television Workshop’s brand. First, overexposure. The big boys may or may not jump on board the program as you pointed out in your article. We have participated in the marketing of several children’s oriented branding programs over the years. None have proved to be a great ROI for the shippers. However, the danger becomes when all the secondary- and tertiary-level produce shippers jump on board.

Let’s say an apple grower in a state with lower quality apples slaps Elmo on its boxes. Who is watching that shipper’s quality versus some premier Washington shipper? Will there be a quality standard for apples sold under the Sesame Street brand? Why not put Cookie Monster on all the US Extra Fancy grade from some second-rate shipper that are relatively mealy and soft for a super-quick promotion? Get rid of the “problem inventory” by using a super-valuable brand to mask the secondary nature of the underlying product!! What a deal!!!

That ignores the “800 lb. Gorilla” of food safety. What happens to the outbreak of some disease in the Bert & Ernie cut salad mix? Who protects the Sesame Street brand from disaster? Goodness…. we can’t even trust Elmo anymore?

Perhaps some would call me a grouchy old industry dinosaur, I suppose. However, when you’ve been around as long as I have, you learn to smell out the problems BEFORE jumping in front of the cameras.

The comparison with the PBH programs is apt. Our critique of the Sesame Street deal is not that it will not increase consumption, perhaps it might; our critique is that 1) We have no idea if it will increase consumption or not, 2) That it might decrease consumption so it may be reckless to undertake without further research, and 3) That if the design of the program is such that it is a roll-out rather than a trial, there will NEVER be any way to know if it has any impact on consumption as there is no control group.

In fact, if consumption declines, supporters of PBH are likely to say that we are lucky to have PBH or it would have declined more. If consumption increases, they will give PBH the credit. Is there any doubt that the White House will say the same about this initiative?

It doesn’t work that way. The oldest fallacy in the book is post hoc ergo proctor hoc (“After this, therefore because of this.”) The classic illustration: the cock crows and then the sun rises. Thus, ignorant people will give credit to the cock for causing the sun to rise.

We pleaded with PBH years ago to not nationalize the program, to not even run it on a state level, but only to try it in a select few markets with appropriate control groups. Since this is the only way to prove that a roll-out of a program would increase consumption, it was the only hope for getting significant funds from sources outside the produce industry.

Instead we went for the politically easy — just as the First Lady has done with this program.

Our correspondent is also correct that having investment made in these industry campaigns has not proven to be profitable for the supply base. Retail produce operators embraced the idea of having the supply base invest in 5-a-Day, because they preferred that kind of generic promotion as it left them free to promote as they wished in their departments. They liked that approach much better than a private company or promotional board offering promotional dollars in exchange for better placement or bigger orders. But ROI typically depends on those types of actions. Even at the retail level, the battle is typically for market share, so boosting produce consumption, which typically will come at the expense of some other department in the supermarket, is not a very profitable game for retailers.

And our writer clearly identifies the big risk in allowing good brands to promote lousy product. Not all produce is sterling, and though Sesame Street is now basking in the First Lady’s love, and that is worth a lot, when low quality produce is adorned with these valuable trademarks, it will not burnish their reputations, it will diminish their reputations. And here is the truth: The best brands in the industry are the least interested in obscuring their brands with characters and, certainly, the least interested in associating themselves with trademarks that their competitors use.

The food safety point is trenchant. When the Spinach Crisis hit, we wrote a piece titled, Look At Their Faces that included a portrait of a three-year-old boy who had died.

Is there any question that the next time, God forbid, that someone dies, the headline will be highlighting that it will be some three-year-old who loved Elmo so much he made his Mom buy the pathogen-laden item? 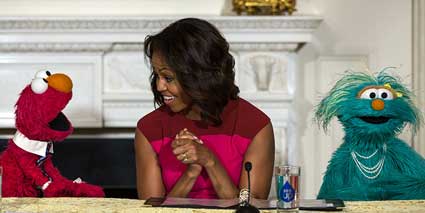 Elmo was created because in the early 1980s Sesame Street did not have a preschool character. Elmo is designed to bond with pre-school children. The First Lady praised Sesame Workshop’s President and CEO, H. Melvin Ming, at her press conference because he made the characters available royalty-free. Yet young children, the elderly, those who have undergone chemotherapy, or anyone with a compromised immune system, are among the most vulnerable to foodborne illness.

If there is a food safety outbreak, won’t people rightly point to the same man and say, “You were irresponsible for allowing the use of your characters to draw a vulnerable population to this food without establishing clear food safety standards!”?

We hope they will be lucky and there never will be such a problem. But Paul Newman pulled his name from bagged salad mixes for exactly this fear – and he wasn’t even focused on little children.

And all this for a program for which we have zero evidence will ever increase produce consumption!