What Is ‘Life Cycle Analysis’?

“Life Cycle Analysis” is all the rage, with British retailers starting to look for this type of analysis to assess the environmental impact of various products.

The particular study we reference below is of canned green beans and seems to particularly focus on an attempt to persuade consumers that canned foods are more environmentally friendly than frozen foods:

In an attempt to delve deeper into its manufacturing processes, ferret out energy drains and see how canning holds up to other modes of preservation, Truitt Bros., Inc. engaged the services of The Institute for Environmental Research and Education (IERE) in Vashon, Wash. The organization authored the report “Canning Green

“Commissioning this study is one part of our concerted efforts to track and limit energy consumption,” said Peter Truitt, co-owner of Truitt Bros., Inc. “We will continue to challenge ourselves, our processes and our farmers to up the ante when it comes to sustainable practices.”

The analysis, a side-by-side comparison of four-ounce servings of canned and frozen green beans, examined electricity and water demand, can and packaging production, transport, and product preparation, while assessing the impacts on global warming, acidification, human health, ozone depletion, ecotoxicity, water use, smog and fossil fuel depletion, among other factors. Time and again canning came out on top, outpacing freezing, which has high energy demands during its storage phase as compared to cans, which can be simply shipped and stored at any temperature. This report echoes findings from the Steel Recycling Institute, whose study, commissioned by Scientific Certification Systems, found that canning food uses less energy than freezing food.

Report authors suggested opportunities for continued improvement in energy reduction for Truitt Bros., Inc. These steps include using recycled steel in its cans, which would decrease greenhouse gas emissions by 10-15 percent, and transitioning to lighter weight packaging. For long-term energy efficiency improvements, study authors suggest a redesign of the bean processing line to further reduce water and energy consumption.

These studies are always interesting but, also, fundamentally arbitrary. Here are two charts taken from the study: 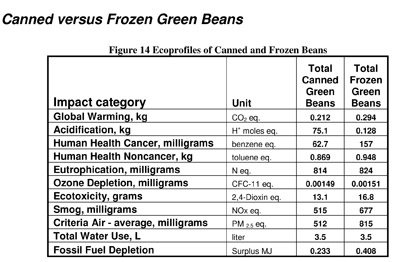 The summary of the results for the two product systems is shown in Figure 14. In each case, lower figures indicate better environmental performance. 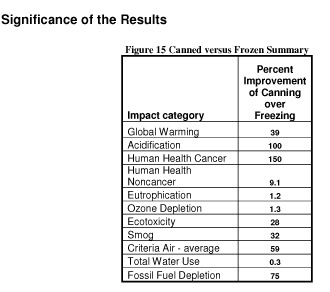 These numbers give a scientific veneer to the study, but the reality is they are based on assumptions that are unlikely to be true. For example, the assumption is made that the hypothetical frozen food plant would be built on the precise location where the canning plant is.

Of course, in reality, we locate facilities where it is advantageous, so if we are going to, say, warehouse frozen foods, the price of electricity might be the dominant consideration on where we locate such a facility.

The entire aluminum industry in the Pacific Northwest is located there to take advantage of inexpensive hydroelectric power.

Besides, even if the core data were accurate, the extrapolations are hypothetical. Here is how they describe the health findings:

This indicator is based on emissions of carcinogenetic compounds from industrial and other resources. It is measured in benzene equivalents. The indicator takes into account the partitioning of the substances into the different parts of the ecosphere. The most common source of benzene is gasoline, with up to 5% benzene by volume, and other carcinogenetic materials are formed during combustion processes. The primary source of the carcinogenicity of the canned and frozen beans life cycles is the combustion of natural gas.

This indicator is the parallel to the cancer, only for substances that do not cause cancer. It is measured in units of toluene equivalents.

The path from “carcinogenetic compounds” to cancer in human beings is not so clear or simple to calculate and what “substances that do not cause cancer” but that impact human health are included in the calculations?

We could go on but let us end with this: If you want to judge the impact on human health of the two processes, don’t we have to consider what people will actually eat? Presumably people who buy frozen green beans prefer them to canned.

If, due to environmental guilt, people now buy green beans they like less, perhaps they will eat them less and eat more ice cream to compensate for their sadness at not enjoying their vegetables. The ice cream will make them fat and add weight to each vehicle they ride, which will increase carbon emissions. Add in the additional carbon footprint of manufacturing, transporting and storing all that ice cream and we may wind up hurting the environment more than if we didn’t rely on such studies.

Sound far-fetched? No more so than these life-cycle studies.

You can read the study here.