We Surely 'Eat Brighter'
But Do We Eat More Fresh Fruits And Vegetables?
We Need Initiatives That Can Be Proven Effective
If We Are To Attract Sustained Support

As PMA Promotes Eat Brighter, Questions Arise About Brand Efficacy And Measurements Of Success Or Failure

White House Chef Tells Industry To Try Harder; But He Needs To Check His Facts

When Elmo Is Crying – Will The Sesame Street Brand Be Used To Market Sub-standard Product? Is The Legal Minimum An Acceptable Food Safety Standard When Promoting To Children?

Now, right from the start we thought the PMA should undertake the program, as we wrote almost three years ago:

It is also most decidedly a feather in the cap for the Produce Marketing Association, its CEO Bryan Silbermann, and Jan DeLyser, Vice President of Marketing for the California Avocado Commission and immediate past chairman of PMA’s Board of Directors, that the association was the selected partner for this initiative and that they, personally, got to go the White House and participate in this event with the First Lady.

Yet we live in an industry with dozens, maybe hundreds of initiatives around the globe designed to increase produce consumption. What almost all of these initiatives share is two things and they are related. First, the initiatives peter out over time, their financing dwindles or interest in them wanes or they simply end. Second, the programs are designed in such a way that it is almost impossible to prove they are successful.

We were once invited to a private PMA dinner, and we were seated next to a vendor who was well invested in the program. He mentioned that he “knew” we were opposed. It wasn’t the time or place for a debate but, in reality, we were even more in favor of the program than he was.

In fact, we were so hopeful the program would succeed that, to us, the key imperative was to do the program in such a way that we could prove its existence actually increased produce consumption. We felt that wasn’t happening, and that the manner in which it was rolled out almost guaranteed we would be unable to prove efficacy and would likely mean the program would never achieve its potential.

So it was with baited breath that we read a piece titled, The Promotional Campaign Brightening Up The Bottom Line, which Kathy Means, Vice President of Industry Relations at the Produce Marketing Association, wrote for Pundit sister publication PRODUCE BUSNESS UK. What would PMA have to show for the effort to date? Do we have some indication that, at last, we had found a program that is boosting produce consumption? Kathy’s first paragraph lays out the case:

The eat brighter! campaign is a collaborative effort among PMA, the educational foundation Sesame Workshop, and the Partnership for a Healthier America. It uses popular Sesame Street characters to promote fruit and vegetables to the preschool set and allows produce marketers selling in the US, Canada, and Mexico to use characters royalty-free to boost sales of fresh produce. PMA, which licenses participating companies for a nominal fee, surveys participants every few months. The research shows a consistent average year-on-year sales increase of 3% for suppliers, with some suppliers reporting even greater boosts.

We confess that though we appreciate Kathy laying out the strongest possible evidence for the success of the program, the fact that “a consistent average year-on-year sales increase of 3% for suppliers, with some suppliers reporting even greater boosts” was it was a bit deflating. The problems:

We don’t know that this number is true. Sales numbers are supplied by the same companies that signed up to use the characters. Some may have reason to make the numbers favorable to the program they endorsed! This is why the gold standard for medical research is a double-blind program. You don’t want the researchers, who typically believe in the new medication and want it to succeed, to know which patients have the new medication and which have the placebo. Intentionally or unintentionally, they may put a finger on the scale.

This sales number is meaningless without a control group. Even if this is true, a 3% increase in sales may be equal to or less than the increase in sales of comparable companies that do not utilize the “eat brighter!” program. In other words, it is only significant if companies using a given promotional program and seeing sales increase are compared with a control group of comparable companies that do not use the promotional program see their sales fall, stay flat or grow by less.

Of course, the point of the program is to increase consumption of produce. Sales numbers are calculated in dollars – not volume. So sales numbers are not an appropriate measurement because prices fluctuate up or down and obscure any meaning in the data.

Even if prices were steady and even if companies using the promotion grow faster than the rest of the industry, that still tells us nothing about consumption. One can imagine lots of reasons why this might be true that have nothing to do with consumption:

A) Maybe the companies that participate in “eat brighter!” are the best in the industry, the most active and promotional. So they would have grown faster with or without eat brighter!

B) Maybe the companies that participate in the “eat brighter!” program were in need of a powerful brand, either because they lacked one or because they have a great brand that is only offered exclusively to one retailer in a region, so picking up another “brand” gives them the opportunity to grow – but just at the expense of other industry members, not by increasing consumption.

So this point – interesting though it may be – simply has no known relationship to increasing consumption of fresh produce.

Now the piece also mentions an example that Kathy acknowledges is anecdotal:

On a more tactical, anecdotal plane, an “eat brighter!” retailer-supplier pair detailed their results from a March promotion aimed at families with younger children. Linda Cunningham of citrus supplier Classic Harvest and Bryan Roberts of Save-A-Lot stores teamed up for a promotion of value-priced bags of naval oranges featuring iconic Sesame Street character Elmo. Classic Harvest’s bags were promoted in 1,300–1,400 stores, and both of them reported great success.

“Classic Harvest is a young company, and we don’t have millions of dollars to spend on branding,” says Cunningham. “We wanted to brand our products with recognizable characters; “eat brighter!” is an affordable option, and PMA has done all the legwork. Millennial moms know the characters, because they grew up with Sesame Street, and the artwork really resonates with children.”

This is really a fascinating quote because it calls into question the very role of PMA in the industry.  Clearly, offering free usage of the Sesame Street characters helps certain industry companies to compete more effectively.  As Linda Cunnigham, a sharp marketer who sees value when it is offered, notes: “Classic Harvest is a young company, and we don’t have millions of dollars to spend on branding. We wanted to brand our products with recognizable characters; “eat brighter!” is an affordable option, and PMA has done all the legwork.”

So, clearly, this is a smart approach for many companies. But is it the purpose of PMA to facilitate efforts in which we have zero evidence boost consumption but just help those companies compete against Halos and Cuties? 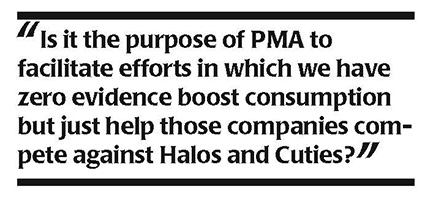 Although a few well-known brands have the “eat brighter!” license, often this was to serve one retail customer who wanted it or to have another brand in areas where they offered exclusivity on their main brand. Sometimes signing on was a way of supporting PMA – Kevin Fiori was vice president of sales and marketing for Sunkist when he was Chairman of the Board at PMA and a big fuss was made over Sunkist being one of the first licensees, but Kevin left Sunkist and the depth of Sunkist’s commitment to the program is unclear.

If you look at Sunkist’s website there is no mention of the program on the home page, no mention on the “retail” page and a Google search shows no mention of Sunkist and  eat brighter! for over a year!

In fact, we can’t find a word on Sunkist’s entire website that mentions “eat brighter!” This is not really surprising. Sunkist’s goal is to build the value of its own Sunkist brand, both to directly sell more citrus at higher prices and to extract value from Sunkist’s substantial Licensed Products revenue source.

Now most executives in the produce industry would support efforts to increase consumption, but since there is zero evidence, even three years after the program start, that this program has any impact on consumption. The question then becomes: Is PMA’s purpose to help weaker brands compete with stronger brands?

Besides these two points, the piece references two more general studies — neither of which even attempted to measure whether Sesame Street characters increase consumption of fresh fruits and vegetables.

Measuring these things is complex because actions have counter-actions. So even if some effort — character marketing, free food distribution, etc. — actually does increase consumption at one meal part, there may be a reaction at some other meal part in which consumers reduce consumption.

In produce, where we typically only sell one brand of each item, the dynamic may be different than in, say, the cereal aisle. In the cereal aisle, a brand can appeal to little girls and then another brand can appeal to adults or little boys. In the produce aisles, if the apples have stickers that some may see as childish, feminine or masculine, it may actually turn off some buyers.

We have no way of knowing if the “eat brighter!” program has increased consumption. And neither does PMA. To us, that is the sadness here.

We have well-established ways of testing these things. You go out, find some civic-minded retailer, divide stores of similar demographics into a test group, an alternative test group, and a control group. Then for a few months, you sticker all the produce going into Group A with Sesame Street characters, you sticker Group B with some alternative sticker and you sell produce “as usual” in group three. This starts to give us some information as to what will boost sales.

Consumption requires further study. If we see an uptick in sales, we continue and expand the effort and add in-home consumption tests, garbage checks, etc. Or you could set up a few cities as test subjects and see if consumption rises as opposed to control cities.

There are many ways to test these programs. But the White House wasn’t really interested in funding and conducting ten years of research to actually determine what can boost consumption of fresh fruits and vegetables.

So they pushed the industry into this national effort which, three years in, has established nothing. With nothing proven, interest and funding will dissipate and this effort will wind up just one more inconclusive effort in a history of ill-studied efforts.

All we can hope is that industry takes this as a lesson. Will we be smarter next time?