The estate tax has expired. Barring a change in the law, however, it will come back with a vengeance on January 1, 2011. The Wall Street Journal ran a piece, Rich Cling to Life to Beat Tax Man, about the machinations some people went through to make it into 2010:

To make it easier on their heirs, some clients are putting provisions into their health-care proxies allowing whoever makes end-of-life medical decisions to consider changes in estate-tax law. “We have done this at least a dozen times, and have gotten more calls recently,” says Andrew Katzenstein, a lawyer with Proskauer Rose LLP in Los Angeles.

Of course, plenty of taxpayers themselves are eager to live to see the new year. One wealthy, terminally ill real-estate entrepreneur has told his doctors he is determined to live until the law changes.

And in fact there is statistical evidence that when estate tax rates change, the timing of deaths shift a bit. Although, of course, we cannot be certain whether the time of deaths actually shifted or if the reporting of the deaths was shifted:

In 1979, Australia abolished federal inheritance taxes. Using daily deaths data, we show that approximately 50 deaths were shifted from the week before the abolition to the week after. This amounts to over half of those who would have been eligible to pay the tax. Although we cannot rule out the possibility that our results are driven by misreporting, our results imply that over the very short run, the death rate may be highly elastic with respect to the inheritance tax rate. 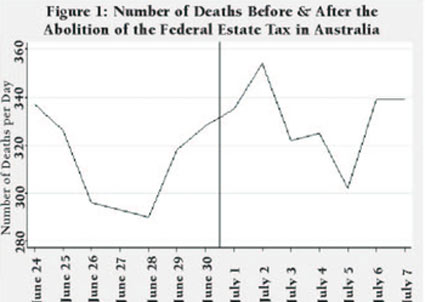 Joshua S. Gans (University of Melbourne) & Andrew Leigh (Australian National University), Toying with Death and Taxes: Some Lessons from Down Under (2006):

Of course, if this year the headline was about the rich clinging to life because the tax was due to expire, what will the headline look like next year when the tax is about to be reimposed? The Wall Street Journal article hinted at the answer to the question:

The situation is causing at least one person to add the prospect of euthanasia to his estate-planning mix, according to Mr. Katzenstein of Proskauer Rose. An elderly, infirm client of his recently asked whether undergoing euthanasia next year in Holland, where it’s legal, might allow his estate to dodge the tax.

United Fresh is involved in an ag coalition that has called for an exemption for family farms from the estate tax. This is an attempt to address an undesirable side effect of the tax — families may have to sell their farm to pay the tax. We suppose it’s a better solution than nothing and understand why United would want to stand with the various farming groups that it may need on future issues so we can endorse United’s involvement.

The estate tax is a foolish tax. We wrote about it almost a decade ago here, and the basic points remain the same:

1. The estate tax is unfair.

People already paid their taxes; it is their money to do with as they will. If two brothers sold their produce company and each made $10 million after taxes, if one brother goes and blows all his money playing baccarat in Monte Carlo, on what ethical basis do we tax the prudent brother who took care of his money?

2. The estate tax is inefficient.

Fortunes are spent on legal and accounting to avoid this tax. One reason it has been so hard to get rid of the estate tax is the insurance industry always lobbies to keep it. So many bright people, who could be using their intelligence and industry to do something useful, are, instead, working to minimize estate taxes.

3. The estate tax reduces the productivity and time horizon of many who could contribute.

Wealthy people have enough money for their own lifetimes. So, in many cases, the only motivation they have to work is to leave behind a gift to those they love. If a person decides to keep working, he will first pay income tax on his earning and then pay an estate tax on his bequest. If the income tax is 35% and the estate tax rate 55%, for every $100 this person earns, he actually gets to apply $29.25 to his intended purpose — this doesn’t count social security taxes, Medicare taxes, state or local taxes, etc. For many, they will be lucky if they have a quarter out of a dollar to pass on.

People may love their children but few want to work hard so that the government gets 75% of their earnings in taxes so their children can get 25%, so highly experienced doctors, engineers, business people, etc., just go play golf. That is a horrible waste.

Greg Mankiw, the noted Harvard Economist, came out against the estate tax.

Martin Feldstein, President Emeritus of the National Bureau of Economic Research, wants to kill the tax.

Gary Becker of the University of Chicago favors permanent repeal.

Many of the arguments in favor of such a tax don’t actually deal with the kind of tax that actually gets imposed. So you will hear advocates speak of the dangers of great concentrations of wealth. That might be an interesting point if someone was proposing to tax multibillion dollar estates, but no such law has ever been passed or seriously proposed.

The estate tax has one other peculiar effect — it biases against family businesses. Large publicly held companies are not affected by the tax. If their shareholders have to sell shares to pay the tax, they are bought by other shareholders, so a public company is immortal and can last forever. In contrast, a family that owns a business often has to mortgage or sell the business to raise money to pay the taxes; this burden on each generation makes it much less likely that a family business can survive.

For an industry like produce, filled with family-owned businesses, this is a public policy issue as likely to affect the future of the trade as any regulation on food safety.