Wal-Mart’s test of a small format store, which we profiled both here and here, has been problematic. Marketside never opened its fifth store in Phoenix and its California stores haven’t opened either. There are many explanations, but one thing is for sure… the problem is not that the initial four stores are making too much money.

Of course, this was always just a toe-in-the-water for Wal-Mart; unlike Tesco, Wal-Mart was always clear it was doing a test, not a launch.

Big companies, though, sometimes have a way of benefiting from new concept development other than building retail stores.

The readers of the Pundit represent an unusual group of well traveled and astute observers of the industry; one prominent industry member, who is part of this Pundit Intelligence Network, sent one notice of the way Wal-Mart is leveraging its Marketside brand and experimenting in ready meals:

Perhaps this is more of an item for your Deli Business sister publication. BUT I wanted to pass along this update on Marketside!!!

Spending some time wandering around Dallas on a planned 12-hour layover, I went into the WalMart Neighborhood Market in Coit Road in Richardson, Texas, and there is a flyer by the deli with Marketside’s name on it. They had a small assortment of Take Out & Heat and cold deli items.

I asked the guy, how long have you been doing the Marketside deal?

He asked me, “How do you know about Marketside?”

“I’m from Phoenix and there’s a couple of stores in town, but the whole store is Marketside, not just a section as you have here”. — Ok, I told a fib as I’m not from Phoenix, but it was in the cause of research!

The associate told me this was one of six stores in the DFW area that was doing a test of the items. I told him, “You gotta get one of the pizza ovens” He said that all of the WalMart stores were to have pizza ovens, but it would take a while. 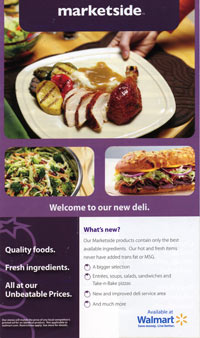 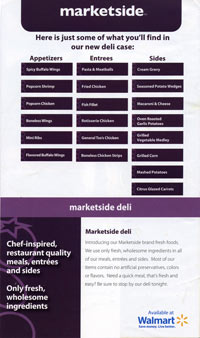 Click here for a larger view of the Marketside flyer

It is an interesting experiment but also somewhat quizzical. One reason Fresh & Easy has not done well is that its core differentiation — ready meals — has basically flopped. Wal-Mart has a better shot because the high volume of traffic gives a chance to sell enough volume to keep a wide assortment fresh, but, still, though some high-end operations do succeed, in mainstream America, there is just no indication Americans want to buy fresh ready meals — other than sandwich programs, pizza and fried and rotisserie chicken — in supermarket-type venues.

The other question is why use a name nobody in Dallas has ever heard of like Marketside? What is the advantage?

What does Marketside represent?