Bruce T. Peterson, senior vice president and general merchandise manager of perishables for Wal-Mart Stores, Inc., has submitted his resignation. With this resignation of the man who held the most important position in the perishable foods arena, an era draws to a close. 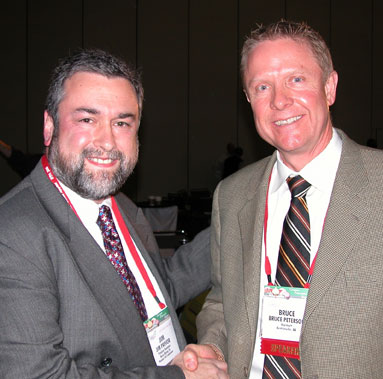 When Bruce Peterson took on the job running produce for Wal-Mart, there were six supercenters. He leaves running perishables, and there are more than 2,256 supercenters. Wal-Mart added stores so quickly that Bruce had to sprint simply to stay in place.

A frail and sickly Sam Walton, already in the twilight of his life, wanted to see through his vision of bringing a full range of food to Wal-Mart’s customers. Crucial to these plans was a young man working in Nebraska. Originally from Michigan, Bruce had worked on the wholesale market and, crucially, he had worked for Meijer, whose operations had many similarities to what Sam hoped to do with the supercenter.

So Sam roused himself even in illness to interview this brash young executive. And he placed his faith in him. It was a faith well placed. Bruce was the next-to-last person Sam Walton ever hired.

Bruce steeled himself for the biggest and fastest ramp-up in history.

He brought to the produce department ideas developed for packaged goods. Today phrases such as contract pricing, comanaged replenishment, collaborative consumer marketing, and supplier development and integration are commonplace in produce — but if Bruce didn’t invent these concepts, it was Bruce who made them commonplace in the produce industry.

It wasn’t easy to sell directly to the Wal-Mart produce operation that Bruce created. There were rigorous metrics and demands for continuity of supply that sent the meek running in the other direction. Yet those companies that persevered became far better, stronger, more sophisticated operations than they had been before.

It is a tribute to a man who has carried a massive club in an organization famous for beating down suppliers that Bruce leaves mostly with friends throughout the supplier community.

Part of this was the overwhelming reality Bruce faced of making sure Wal-Mart had enough produce. He never lost sight of the fact that saving a nickel on a package was a loser if it meant Wal-Mart was going to be out of stock.

But part of this was just his way. If his schedule was open, he never turned down an opportunity to speak to growers and shippers. He deeply believed that Wal-Mart could not grow its produce operation on the backs of failing suppliers.

He believed in association work and fought hard in Bentonville for what he saw as the necessity of involvement with the broader trade. He didn’t need an association to be at the vortex of all that happened in the industry, but he knew produce people well enough to know that a collaborative approach would work better than a dictatorial one. He rose to become chairman of the Produce Marketing Association.

Why is he leaving now? He is the most senior, both in age and years on the job, of anyone in the company at his level. But big companies believe in cross-fertilization. Wal-Mart has had troubles lately and with his record of success, senior executives thought it time for him to move on to other products.

If he was, at heart, a retail guy, it would have been an opportunity to go sell lawnmowers or televisions and gain a whole new skill set: the perfect preparation for another step up the retail ladder.

But Bruce was, is, and always will be a produce guy. He learned to sell other perishables, but his heart and soul are in the produce arena.

Doubtless the decision to resign was made easier because Bruce’s longtime boss, for whom he has the greatest respect — Doug Degn, executive vice president of food, consumables and hardlines — has decided to retire.

Bruce will have many opportunities. We will be shocked if we don’t get several feelers at the Pundit’s office about making him CEO of various supply-side organizations within 24 hours of publishing this piece.

Such is the benefit of being both a respected business executive and a good man.

Besides, the guy deserves a break. His inspiration has always been not Sam Walton, but Bruce’s wife, Maggie, a woman both smart and stunning. Together they will see their son, Ryan, marry this year. And the Peterson house has never lacked for friendly houseguests, including this Pundit and his family. They have much to be grateful for. They have received much in life.

Yet Bruce gave something precious. When the history of the produce industry is finally written — you get one guess on who intends to write it! — the largest buyer in the history of the world appeared and, thanks to Bruce, it succeeded with suppliers and not at the expense of suppliers.

In that one decision Bruce set the tone for an industry, and we are all incomprehensibly better situated because he did.