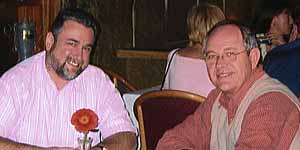 The Pundit has always thought well of Wayne McKnight, Wal-Mart’s Vice President of Global Procurement. His announcement that Danie Kievet will join Wal-Mart, heading up its South African Procurement Operations, is a coup for Wal-Mart, the realization of a life-long dream for Danie and proof that great minds think alike.

In September 2006, after the Pundit returned from South Africa, the Pundit’s sister magazine, PRODUCE BUSINESS, published a column in which we wrote the following:

What is really needed is for some corporate giant, a Wal-Mart, a Costco, a Kroger, a Supervalu, etc., to step up to the plate and locate a global procurement office in South Africa.

Let them procure fruits and vegetables, but also wine, seafood, canned goods, juices and many more things. I think the company that does this can make a buck. But, beyond that, the company would be serving both American interests and the hope for future world peace.

And by the way, I have just the guy for the job. A gentleman named Danie Kieviet showed me around South Africa. He is a member of the board of directors of PMA. He also is the founder of the modern South African retail produce industry, as he built from scratch the procurement arm for Africa’s largest supermarket chain, the Shoprite/Checkers group. He pioneered direct procurement for retailers and built up supply chains where there were none.

Now, he has built an organization, known as Freshworld, involving his two eldest sons, that champions the interests of the Sunkist brand, and he has built a substantial counter-seasonal market share in Asia. He is knowledgeable and modern, up on RFID, category management and all the latest technologies, but he is also old school. Like a great African bull elephant, he cannot be stopped.

Danie travels across the country and around the world to create opportunities in South Africa. If some giant organization, with stores that could sell product, gave him a shot, he would not only make them plenty of money but also open up opportunities for producers all across South Africa and into the recesses of the continent.

He could identify not only traditional exporters but also new farmers being assisted by empowerment programs. To give him a shot would be a contribution to peace and prosperity for a continent with precious little of either. Who will step up to the plate?

Since that column was written, Danie’s term on the PMA board has ended, but he was appointed as Chairman of PMA’s International Council.

Wal-Mart has done a good thing. For itself, it has secured the single top man in the South African deal. For the world, it has done something special by putting such an effective executive in such a crucial position. You can be sure that exports from Africa will receive a boost. To help such a country as South Africa and a continent such as Africa is a very good thing indeed.

Although initially the South African product is likely to go to traditional South African markets, such as Wal-Mart’s ASDA subsidiary, Danie is not the type of guy who accepts convention as a limitation. He will find wine and seafood, produce and ethnic products, and he will in his own persuasive manner have Wal-Mart buyers from China to Mexico convinced they must have South African product.

We learned a great deal during our travels and, mostly, what we learned is due to Danie’s rigorous scheduling and fine tutoring. Doubtless Danie’s new position as wine buyer will send him back where he took the Pundit in The Cape Winelands and to Mountain Pass Road in Franschoek and specifically to a restaurant called Haute Cabriére. The accompanying photo shows Danie and the Pundit resting as we prepared for several hours of rigorous wine tasting.

The right man, the right moment and the right opportunity have certainly met. The Pundit congratulates all concerned.