Our piece, The Garden State… With No Gardener, highlighted the proposal to eliminate The New Jersey Department of Agriculture. That piece was posted a month before a big protest was held in Trenton. You can view the video to get some graphics on the situation:

The protest was also picked in many local newspapers:

Local Farmers Fight to Save Ag Department
Cape May County Herald –– April 9
In an effort to save the state Department of Agriculture, Cape May County farmers joined hundreds of others from throughout New Jersey…

Farmers don’t want to sacrifice green for green
Woodbridge Sentinel — April 9
Alan Habiak just loves farming. It’s in his blood and the “smell in the air” really gets to him. That’s why he and other farmers … 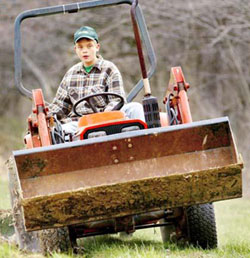 Perhaps more powerful than the public protests are the private communications going on. For example a veteran on the buying end of the produce industry sent this letter to his own State Senator:

Hi neighbor! As a resident of Verona, I feel like I know you personally, having watched your “political upbringing” via the Verona Cedar Grove Times. It is with this knowledge that you are one who always makes decisions based on what is right for the citizens as a whole that I make this plea.

I have been in the fresh fruit and vegetable business since my first days working part time in the produce department at Kings Super Markets in 1973. I have since worked in several Kings stores, served as a buyer at Kings headquarters and moved up in position along the way. I currently am vice president of procurement of the same company that continues to supply Kings and many other supermarkets with fresh produce and other products. After over 34 years in the business, I thought I had seen it all.

The budget proposal that is before you calls for the elimination of the New Jersey department of agriculture as we know it. While I can appreciate the governor’s attempt at bringing spending under control, this one piece makes no sense at all. I know that you have been receiving many financial reasons why the department of agriculture is so important to our economy, so I will not bore you with more of the same.

However, there is one aspect that I want to make sure is clear to you and your associates. The people and leadership of the New Jersey department of agriculture is what makes it so special. I know there are arguments that the essential services will be absorbed by other departments. My fear is that the great relationship that we in the ag community have with state government would also be absorbed and eventually disappear. By ag community I include all supermarkets, farm stands, small mom and pop food stores, restaurants and every other place in the state that has anything to do with food.

My own personal experience with the New Jersey department of agriculture began in the early 80s when we at Kings promoted home grown fruits and vegetables in a way that was to become the beginning of the Jersey Fresh program. I was the 1995 recipient of the Phil Alampi marketing award for my part in promoting Jersey Fresh products. To this day, our company continues to make a special effort to market and promote products that are grown by the farmers of New Jersey. The reason for our involvement is not only to increase business, but under the leadership of the department of agriculture, we have become one giant ag family and look to help our farmer brothers and sisters.

Consider that in the 34 years that I have been in this industry, I have only seen 3 different Secretaries of Agriculture; Phillip Alampi, Arthur Brown and Charles Kuperus, and all 3 of them are or were considered personal friends. And when your friend asks you to do something, you do it. That’s the way a lot of things get accomplished in our business. (Probably a lot like your business, I imagine.) The 3 secretaries had a personal relationship with each and every member of the extended ag community. If we lose this personal touch, things simply will not get done that need to get done. Again, I will not waste your time with the details but would be more than happy to expand on these thoughts.

I hope some of this makes sense to you. It is always much easier to convey a feeling like this in person rather than via e-mail.

If you would like additional perspective on the personal aspect of this issue, please feel free to contact me any way you wish. I am a volunteer EMT on the Verona Rescue Squad so I am sure you can find someone you know who also knows me.

I have never written to anyone in government before, if that is any indication of how serious I believe this issue is to the residents of New Jersey.

Regards to you and your family.

The good Senator hasn’t had a chance to respond yet, but we are sure he will. This type of letter — personal, drafted individually, by a constituent, with relevant experience and knowledge — is pretty much the political gold standard. It certainly is far more powerful than those form letters lobbying groups give people to send out by clicking a button on a web site.

A letter such as Jeff’s shows not just interest but passion, and that translates for a politician into an issue that, handled properly, will translate into votes, tangible financial support and a long term ally. We hope that others who think the same way in New Jersey will also take the time to write their state legislators.

We think it probable that the Governor doesn’t really have his sights set on closing the department. By the time the state finishes moving all the “essential services” to other departments, it will wind up costing the state more to close the department in the first year than to keep it open and then there will be only minimal savings in the years to come.

When the moment comes, we suspect that a “grand bargain” will be struck and the Department will be saved in exchange for some real priority of the governor, perhaps an increase in tolls that he had been pushing for.

Thanks to Jeff for sharing his letter. We hope the grower community will remember that letter the next time they get steamed at retailers.