The big kick off for the association was at United’s Washington Public Policy Conference. This is United’s great event, the one that most perfectly showcases what the association actually does. I couldn’t make it this year, but I’ve been honored to speak there before.

Once I gave a speech at WPPC, and it led to speeches around the world on slotting fees, including a session at the American Society of Agricultural Economists.

The WPPC is a three-prong combination of A) information from top dogs in D.C., B) revival meeting, as they try to inspire the grass roots, and C) outreach, as produce industry members visit Capitol Hill and try to lobby politicos of all types, especially members of the House and Senate. 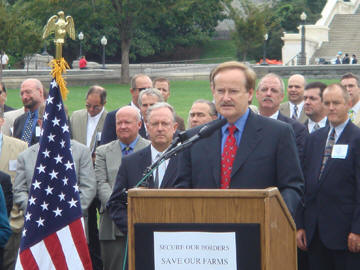 Tom Stenzel, President of UFPA, addresses a group of WPPC attendees and others in a rally held last week on immigration.

It is a very impressive event, and it educates you a lot on both the issues and the methods used in contemporary Washington.

One of the items that I hope will be on the agenda of the new United Board is to re-address and clarify who United represents and what that means.

United and PMA are both highly unusual trade associations in that both are vertically integrated. Each organization has members ranging from growers to retailers and foodservice operators, and both are horizontally diverse, representing, for example, massive commercial growers in the West and small family farms in the Northeast.

Vertical integration is great when it comes to helping develop supply chains and working out data integration, but it poses grave challenges for an association that focuses on government relations.

When an issue such as NAFTA came along — opposed by tomato growers in Florida but supported by apple growers in Washington — on what basis could United make a decision?

When disputes arise over PACA — the very essence of which is to set the rules between different players in the business — how could United take a stand without selling some of its members down the river?

Today’s big issue and the big push at the Washington Public Policy Conference is immigration reform. Here at the Pundit, we’ve dealt with the issue here and here.

This is also a very difficult issue for United. Although certain growers are very dependent on Mexican labor, especially those in the West, many growers don’t use such laborers at all. Other parts of the United membership may have different views on these issues as well as different economic interests.

Some of United’s distributor/wholesaler members told me they found that the whole WPPC effort ignored them. It is simply not 100% obvious that every terminal market wholesaler must support guest worker programs.

These quiet rumblings are significant because, in the past, they have led United’s members to go outside United to set up various structures. The North American Perishable Agricultural Receivers (NAPAR) association — now in alliance with FMI — was set up almost completely by United members and, ironically, the large companies that were founding members of the International Fresh-cut Produce Association itself were all United members.

The question, to be blunt, is this: In terms of government relations, is United a grower group? Are there circumstances in which United might adopt a position opposed to that of the Western Growers Association or another grower group?

There is no right or wrong here, and I am not certain that the produce industry, defined by the United membership roster, actually has a collective interest other than, perhaps, increasing consumption that can be lobbied for.

An association can provide many services for people and organizations that it does not purport to “represent” in Washington.

Still, I think it is a recipe for unhappiness to have members thinking they are represented in D.C. when they are really not. A strong governmental affairs program must begin with a strong statement of exactly whose interests are being represented.