Sir David Spiegelhalter is a British Statistician and the Winton Professor of the Public Understanding of Risk in the Statistical Laboratory at the University of Cambridge. He has studied the situation we are now in with regard to COVID-19:

It’s always useful to remember that we’re all going to die sometime, and the rate at which we do so is faithfully recorded in the life tables provided by the Office For National Statistics.

These provide annual ‘hazards’ — which is the proportion of people of each year of age, who do not reach their next birthday. These are plotted below on a logarithmic scale, showing an early peak due to congenital diseases and birth trauma, then a minimum around age 9 or 10 (nobody in the history of humanity has been as safe as a contemporary primary school child), and then a steady increase which is remarkably linear, apart from a sad bump in late teens and early 20’s, whose cause is all too clear.

This linearity on a logarithmic scale corresponds to exponential increase — the proportion of people dying each year increases at about 9%, regardless of age. So average risk of death doubles in 8 years. 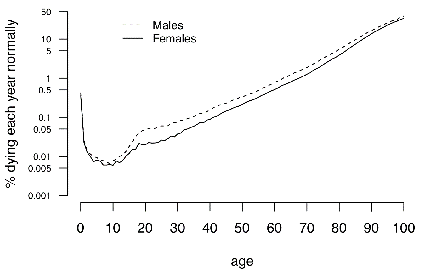 Annual risk of death (hazard) for England and Wales, 2016–2018, from Office for National Statistics. 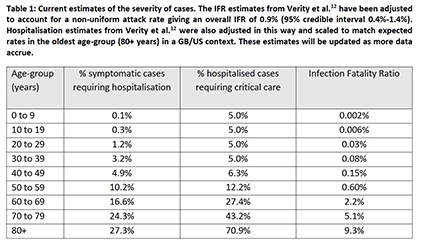 These can be superimposed on the background mortality to produce the figure below… The agreement is remarkable, showing the Covid risk follows a similar pattern as the background risk. 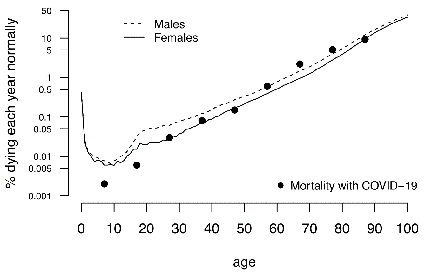 The Table below compares the risk following infection with the background hazard later in the relevant decade (the 7th year). The relative risk is the ratio of the Covid-19 risk to background. When multiplied by 12, it provides the equivalent risk in terms of months of ‘normal life’.

This suggests that COVID-19 very roughly contributes a year’s worth of risk. There is a simple reality check on this figure. Every year around 600,000 people die in the UK. The Imperial College team estimates that if the virus went completely unchallenged, around 80% of people would be infected and there would be around 510,000 deaths.

So, roughly speaking, we might say that getting COVID-19 is like packing a year’s worth of risk into a week or two. Which is why it’s important to spread out the infections to avoid the NHS being overwhelmed.

It’s also important to note that all the risks quoted are the average (mean) risks for people of the relevant age, but are not the risks of the average person! This is because, both for COVID and in normal circumstances, much of the risk is held by people whom are already chronically ill.

So for the large majority of healthy people, their risks of either dying from COVID, or dying of something else, are much lower than those quoted here. Although of course for every death there will be others who are seriously ill.

Also … there will be substantial overlap in these two groups — many people who die of COVID would have died anyway within a short period — and so these risks cannot be simply added, and it does not simply double the risk of people who get infected.

It is crucially important that the NHS is not overwhelmed, but if COVID deaths can be kept in the order of say 20,000 by stringent suppression measures, as is now being suggested, there may end up being a minimal impact on overall mortality for 2020 (although background mortality could increase due to pressures on the health services and the side-effects of isolation). Although, as we are seeing, at vast cost.

The article indicates for someone in their 50s that only 1.3% of symptomatic cases will require critical care, and only 0.6% will die. First, there are probably many more cases that are asymptomatic or self-resolve at home without ever being tested — so it seems the increase in risk of death by the existence of this virus in the world is quite low.

But this raises the question: Will that change? After this situation is all over, and if a political party says it is going to double Medicare charges to have extra money to build hospitals, train doctors, boost reserves of various medical equipment, etc. — all to prepare us for the next outbreak — who would vote for that?

In time, it is safe to say, not many people.

During the Obama administration, there was a decision to release N95 respirator masks from the national stockpile and they were never replaced. As Bloomberg reports: “after the H1N1 influenza outbreak in 2009, which triggered a nationwide shortage of masks and caused a 2- to 3-year backlog orders for the N95 variety, the stockpile distributed about three-quarters of its inventory and didn’t build back the supply.”

Of course, the Trump administration didn’t prioritize this when it took office either.

This is not because either Obama or Trump are evil or even negligent. It is just that there are many needs, and it is always tempting to not invest to prepare for hypothetical circumstances.

The closing down of the economy, with the horrid cost to so many, is a function of our decision as a society to not pay the price of preparedness.