Our piece, A TRIPLE CROWN OF AWARDS: For Commentary Well-Thought; Events Well-Presented; A Life Well-Lived… All In Service To An Industry Well-Loved, profiled a series of awards with which we were honored.

We have worked with Paul Kneeland, Vice President of Produce & Floral at Kings Food Markets, for many years, dating back to when he was Produce and Floral Director at Roche Bros. In fact, when Paul was at Roche Bros., he also served as First Vice President of the New England Produce Council and Chairman of their annual epo. When NEPC launched the first edition of its expo, we flew up to Boston to help Paul and the Association by keynoting the first year’s event.

Ultimately, Paul became President of the EPC, and we continued our close cooperation.

Now Paul has finished his term and Vic Savanello, who we just highlighted here, has assumed the role of President.

Both Vic and Paul recently did the presentation of the Lifetime Achievement Award, which the EPC was generous enough to bestow on the Pundit. It was a special honor that, as one of his last official acts as President, Paul read the presentation. 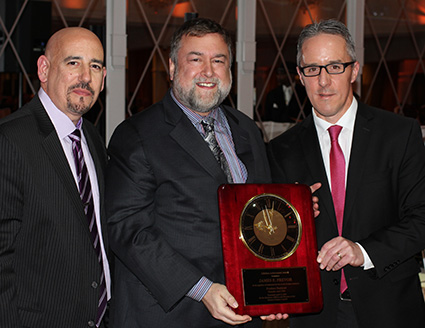 We thought it would be nice to share his kind words:

It gives me great pleasure tonight to present the Eastern Produce Council’s ‘Lifetime Achievement Award’. This award exemplifies the efforts of great leaders in this great industry, leaders that make it an everyday habit of giving back.

Our honoree can be described as controversial and challenging, unfettered and unapologetic, riveting, bold, and edgy. He has been known to challenge the biggest and the best in the industry, causing certain heartburn and unease. Yet, Truth is certainly his Best Defense.

He is described as an intelligent thinker, provoking inflection and questioning the norm. He is a trendsetter, always looking for different ways to inform the industry. He is an educator, providing insights and understanding to those who simply ask him.

In fact, he has made a career out of it.

Addressing companies around the globe from Australia to Europe, speaking to supermarkets, wholesalers and grower groups, our honoree is sought out by those who want to know more.

Adding to his cornerstone publication, PRODUCE BUSINESS, our honoree has grown a global media empire consisting of multiple publications in multiple places. In social media, he fairs just as well with his very popular newsletter, the online Perishable Pundit, along with his website Perishable News to name just a few. He has been seen on CNN, Fox Business, NPR and the BBC. He has written for the Wall Street Journal and been quoted in the New York Times, the Financial Times and many other publications.

In 2009, his group joined hands with the Eastern Produce Council on The New York Produce Show and Conference, and in just five years helped it grow it into the second largest produce show in North America. But that’s just the beginning of our honoree’s event career. In 2014, the London Produce Show and Conference was born and, working with the Fresh Produce Consortium, that extraordinary event is about to unveil its second edition this June in London.

Karen Caplan, President & CEO of Frieda’s had this to say:

“(He) truly is a thought-leader. And I might add: he is fearless. When others would never speak out loud; they were afraid of the consequences. Jim would.

He definitely would publish widely about controversial subjects, (such as the wisdom or folly of Tesco’s foray into the USA market, Walmart’s Purchasing Practices or the ROI of the industry’s investment in macro marketing activities such as PBH or Sesame Street).

Jim does his research. And then he goes public with his thoughts and predictions.  He makes our industry think. And in some ways, he gives us hope, because oftentimes what he writes about are only thoughts we think, and we wonder what others feel on these controversial subjects.

On a personal note, he makes sure to balance his crazy work travel schedule by attending almost every event his two awesome sons are involved in (Jr. Pundit Primo — aka William — and Jr. Pundit Segundo — aka Matthew). Jim is truly a family man, and never misses an opportunity to reference his family roots in the produce business.”

Our honoree is the fourth generation of his family to be active in the food business in the United States, with roles in importing, exporting, and wholesaling. His family business also included running supermarkets and convenience stores as well as a restaurant chain and a farming operation.

From day one, the motto of his companies has been to ‘Initiate Industry Improvement’. Surely, this grounding was imbedded into our honoree through his father Michael, grandfather Harry, and great-grandfather Jacob.

Theresa Nolan had this to say:

“Without Jim’s coverage in PRODUCE BUSINESS of my and [my husband Jim’s] protracted legal battle, I am not sure how I would have made it through his death, the trial and all the emotional ups and downs that ensued.

Even before my husband’s death, Jim’s excellent commentary in The Perishable Pundit gave Jim and me comfort and hope. We felt alienated from so many people, but Jim courageously supported us. So many were afraid to speak out. We knew we were not alone in our fight. Thank you from the bottom of my heart.

I will never forget what Jim Prevor did to help us. God bless him for all he has done.”

Awards? He has a few. Including the American Business Media’s Jesse H. Neal Award and the American Society of Business Press Editors Azbee Award for excellence in editorial, commentary and opinion journalism.

In recognition of our honoree’s rock solid reputation for bringing courage, integrity and passion to his work, he was presented with the Timothy White Award for Editorial Integrity, an award often referred to as ‘the most important award in business-to-business journalism’

He, himself, will describe his greatest awards as his family. For all he does is for them — his wife Debbie and the apples of his eyes, sons William and Matthew.

It was an overwhelming experience to hear these words, and we will never forget this moment. A sincere thank you to Paul Kneeland, Vic Savanello, John McAleavey, the Executive Director of the EPC, the entire board and the membership. It was especially meaningful as team members and family and especially the Jr. Pundits could all be there to hear Paul speak. 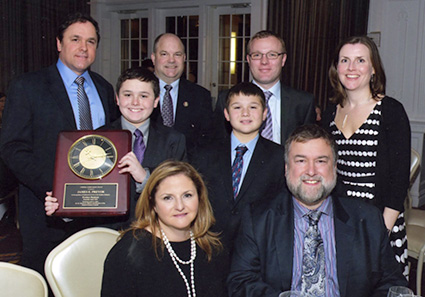 We all work hard and do so many things, but our children rarely get to hear exactly what other people think of their father or mother. That was a gift that we’ve never received before.

Here is a pledge to strive to always be worthy of this recognition.