In conjunction with the reception, PRODUCE BUSINESS magazine commenced an annual tradition of presenting an award to a woman whose life story inspires others and leads to a more successful industry.

Last year, the first annual award went to Theresa Lowden, Executive Vice President at JOH, who was instrumental in launching both The Women’s Leadership Committee and The New York Produce Show and Conference.

This year’s honoree is also a Theresa, who also has a special connection to The New York Produce Show and Conference.

Theresa Nolan, Founder, President and CEO of The Nolan Network, has a formidable claim to this award. For almost 30 years, she has shepherded her own successful business, being one of the first in the industry to establish a national network focused on enhancing merchandising techniques at retail. In so doing, she became a crucial connector between companies and organizations that wanted to increase produce sales and the retail community.

She is known as smart, hardworking, innovative and vivacious — yet it was long after her thriving company was built that she would show her mettle in a way unexpected.

Theresa’s longtime husband, James Nolan, was widely respected in the industry for his integrity. Jim had been domestic and international sales manager for Ocean Spray and he felt that the company’s conduct was such that he was compelled to file a lawsuit against Ocean Spray arguing that the company had violated anti-trust laws.

It was all very complicated, but filing such a lawsuit became all-consuming, one he never could have undertaken without Theresa’s support. It was inevitable that such a battle would be emotionally and financially draining, but Theresa’s endorsement of the values Jim was fighting for left her determined to support Jim, whatever the cost to her business or her personal life.

Indeed when Jim died of a heart attack in March of 2008 at the age of 61, those who knew him best saw the lawsuit as a force that drained the life from him. Still Theresa would not settle. She was determined to see the fight through.

In the end a jury in Plymouth, Massachusetts, would vindicate the claims that the Nolans made, awarding the Nolans a million dollars in damages, with another judge reviewing the case raising the settlement to two million dollars.

PRODUCE BUSINESS ran several important pieces, including this one chronicling the story:

And here on the Pundit, we fought the good fight for ethical standards in the industry and fair treatment in many related pieces.

This all came to a climax at the Inaugural edition of The New York Produce Show and Conference when Theresa took to the stage to announce the establishment of a foundation that, among other things, would fund scholarships for students to attend important industry events. 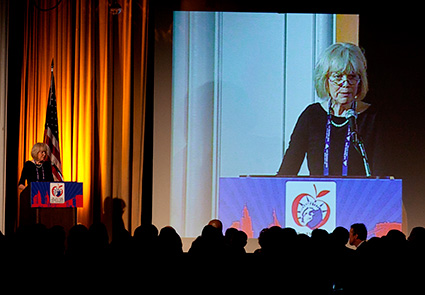 We still see Theresa Nolan on stage at the Hilton after marching forward in the face of difficulty, holding the memory of her lost husband and the values they both shared close to her heart.

There is no question that in selecting Theresa Nolan as the recipient of The Second Annual EPC Woman of Distinction Award the committee found a model who will be admired for business prowess, personal integrity and willingness to fight, when quitting would be the easy path.

That is an inspiration and a Woman of Distinction.

Many congratulations to Theresa Nolan… and we know that Jim is up there applauding hard — he was always your greatest fan. But now many other fans will have an opportunity to express their admiration for who Theresa is and what she has done.

Many congratulations to Theresa.

Although free, this event is an Invitation Only limited-capacity event. If you would like an invitation, please let us know here.