The Food and Drug Administration (FDA) and California’s Department of Health Services (CDHS) today released a joint report on an extensive investigation into the causes of an E.coli O157:H7 outbreak last fall that was associated with contaminated Dole brand Baby Spinach and resulted in 205 confirmed illnesses and three deaths. The inquiry was conducted by the California Food Emergency Response Team (CalFERT), a team of experts from FDA’s district office in San Francisco and CDHS. They were assisted by experts from the Centers for Disease Control and Prevention (CDC) and Animal and Plant Health Inspection Service of the U.S. Department of Agriculture. 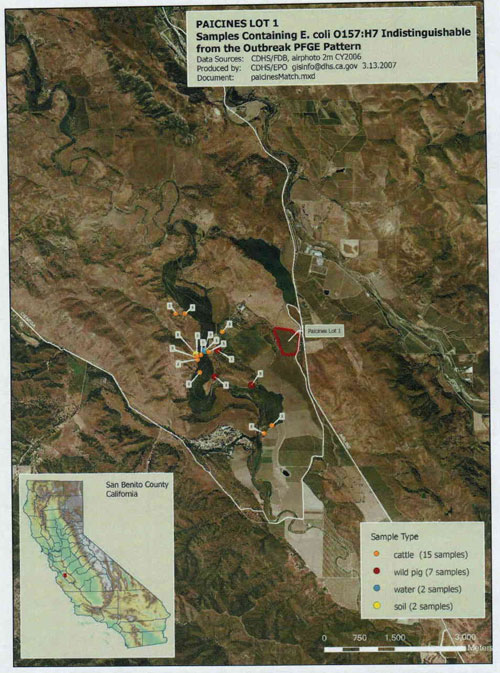 The investigators successfully identified the environmental risk factors and the areas that were most likely involved in the outbreak, but they were unable to definitely determine how the contamination originated.

“The probe was a notable effort by federal, state and local officials,” said Robert E. Brackett, Ph.D., director of FDA’s Center for Food Safety and Applied Nutrition. “It yielded valuable information we can use to determine how best to reduce the likelihood of similar outbreaks.”

The report describes the painstaking detective work of the investigators following the first reports from CDC in September 2006 of an apparent outbreak of E.coli O157:H7 linked to the consumption of bagged spinach. The probe initially focused on the processing and packaging plant of Natural Selection Foods, LLC in San Juan Bautista, CA, where the contaminated products had been processed.

The next focus of the inquiry was the source of the spinach in 13 bags containing E.coli O157:H7 isolates that had been collected nationwide from sick customers. Using the product codes on the bags, and employing DNA fingerprinting on the bacteria from the bags, the investigators were able to match environmental samples of E.coli O157:H7 from one field to the strain that had caused the outbreak. Potential environmental risk factors for E.coli O157:H7 contamination at or near the field included the presence of wild pigs, the proximity of irrigation wells used to grow produce for ready-to-eat packaging, and surface waterways exposed to feces from cattle and wildlife.

Because the contamination occurred before the start of the investigation, and because of the many ways that E.coli O157:H7 can be transferred — including animals, humans, and water — the precise means by which the bacteria spread to the spinach remain unknown.

FDA continues to work closely with its federal, state and local partners to keep produce safe from bacterial contamination. In August 2006, the agency announced an initiative called “Leafy Greens” that focuses attention on the produce, contamination agents, and other areas of potential public health concern associated with such products. Recently, FDA recently issued a draft final guidance, “Guide to Minimize Microbial Food Safety Hazards of Fresh-cut Fruits and Vegetables”, which recommends measures to prevent microbial contamination during the processing of fresh-cut produce

Earlier this week the agency explored issues involved in the safety of fresh produce in a public hearing held in California, and it plans to hold a similar hearing on April 13, 2007 in Maryland. The goal of both events is to solicit and share information about the recent outbreaks, the involved and associated risk factors, and measures the agency could adopt to advance the safety of fresh produce.

Although washing produce would not have prevented the recent E-coli outbreak involving spinach, washing can reduce the risk of contamination from some other causes. FDA advises consumers that all produce should be thoroughly washed before eating.

You can read the whole report here. The pictures, particularly the photos showing where the fields are and where the E. coli 0157:H7 was found are illuminating.

The Pundit has read all fifty pages and learned very little. Some permits weren’t in order, some records weren’t as orderly as you would like. They used chicken manure pellets on a field. But there is no smoking gun and very little that is new.

In fact the association with one field is actually fairly weak as they found no samples of the strain of the illness on any field and have only conjectures about how the E.coli 0157:H7 might have traveled to the field.

It is impressive as detective work, but unsatisfactory as a guide for preventing foodborne illness.