The Passing Of Ernest Gallo 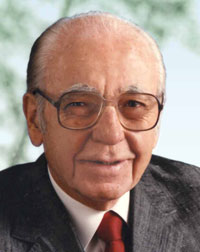 Ernest Gallo, who got his original wine-making recipe from a public library and built the world’s largest winemaking operation, died at age 97 in his home in Modesto, California.

The Pundit never knew the man, but at least one of our readers and contributors did — Frank McCarthy of Albert’s Organics/United Natural Foods.

We ran a piece on Wal-Mart and the nature of upscale that prompted Frank to send us this note:

This reminds me of a conversation I had with Ernest Gallo in another career about twenty years ago. He wanted to upscale the image of his wines. I explained to him that he’d spent a half billion dollars over a forty year period positioning Gallo as good cheap wine. (Remember Gallo Hearty Burgundy?) I told him it would take a generation and a billion dollars to accomplish this task. He said, “I better get started right away.” Family companies have options that public companies don’t.

When we asked for his thoughts upon hearing of Mr. Gallo’s passing, Frank said this:

He was one of the creators of the American wine industry. His early vision was to make wine accessible to the average person. His early wines were made from inexpensive grapes, but they were always technically excellent and a great value for the money.

His company essentially controlled the price of wine grapes in California, but you never heard a grower complain. Gallo’s price was always fair and sometimes generous. This, of course, put a floor under the table grape market as well.

His real genius was in marketing. He knew the value of distribution and he fought constantly for every placement and every facing. He also played fair in what was sometimes a dirty game.

Some of his later wines were superb, made from the best Napa and Sonoma had to offer, and still a bargain. In a world full of pretense and pretension, he was an honest merchant. We are poorer for his passing.

Maybe a definition of a life well lived is that when you go, people you knew have things like that to say about you.

May he rest in peace.