The Next Generation Of Character Marketing

Our recent piece on the Disney Garden project, along with many previous pieces on the use of characters to sell fresh produce, brought to mind a Pundit experience over the Passover/Easter holidays.

The Pundit family was in Park City, Utah, and staying in a hotel in which the rooms had a full kitchen. This gave the Pundit an opportunity to shop the local Kroger banner, a Smith’s store open 24 hours a day.

Although we’ve walked through many a Kroger store, this was our first opportunity to shop one with the Jr. Pundits, Primo and Segundo — aka William (age 5) and Matthew (age 3) — and they got very excited about the broad range of Disney-themed items. Kroger, unique among America’s food retailers, has its own deal with Disney.

Unlike the Disney Garden project, it covers a wide range of non-produce items, such as dairy products, pastas, etc. We did see (and buy) a nice clamshell master package containing bagged sliced apples, and we bought both the green apple and the red apple versions but found them out of stock of the red on two subsequent visits. Also in produce we bought some Disney-themed raisins and some dried fruit mix. 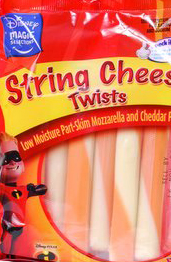 Although the kids enjoyed all these products and other Disney versions we bought of string cheese, cereal and many other products, we can’t say that they ate any more of the items than they would have without the logo. And in the long term, we are not going to buy products that aren’t eaten.

One exception though: We bought a mild cheddar cheese that was shaped like the head of Mickey Mouse. The kids loved it. We could make open-faced grilled cheese sandwiches, cut the bread away from a regular sandwich in the shape of Mickey or just eat the cheese slice itself.

We would estimate that the Disney Magic Selections Mickey Shaped Sliceswere consumed at double or triple the normal consumption rate for plain old square cheddar slices. Why? Because they were more fun.

Which points to a need for more creativity in produce processing. They seem to have done something like this with cheese, with ice cream, with pasta and even hamburger patties.

In all these cases, they have changed the actual product, rather than just 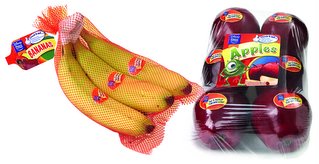 changing the packaging. We bet if someone could figure out how to stamp Mickey-shaped apple pieces or melon slices, they would sell and could be priced in such a way that the waste of some product might not matter.

The other notable thing about the cheddar slices is that, as far as we can tell, the Smith’s store hadn’t reduced the assortment of non-Disney product, so consumers who preferred not be reminded of Mickey Mouse with each piece of cheese could purchase cheddar in many other forms.

In most cases, if they carry a character-based item, produce retailers make it their sole display. So if a senior citizen would like to buy some

On a bag of spinach that will be discarded and cooked, this probably won’t matter, but on a consumer package that we expect people to throw in a lunchbox or bring to the office, this could really depress sales.

We need to be looking at two things to bring about the next generation in character marketing:

Right now, it is still something of a novelty but, in time, we will need more than attractive packaging to build demand for fresh produce.