The First President Of Perishables 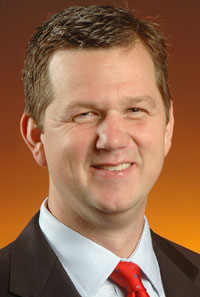 Safeway’s appointment of Des Hague to a high ranking position in the perishables arena might have passed without remark. After all he is certainly highly qualified:

He comes to Safeway from Hot Stuff Foods (formerly Orion Food Systems), an international food franchiser with more than 2,000 locations worldwide, where he spent three years as Chairman, Chief Executive Officer and President. Prior to that, he spent two years as Vice President, Fresh Food Merchandising at 7-Eleven in Dallas, where he was responsible for the chain’s foodservice program across more than 25,000 locations. Mr. Hague spent several years at Maytag’s Commercial Business Unit in Dallas as Vice President of Strategic Marketing. Before that, he held a range of marketing and management positions in the Pepsico and Whitebread organizations in the U.K. and Europe. Mr. Hague holds an MBA from the American College in London, England.

Yet his appointment brings at least two interesting points to mind:

It is hard to know exactly what to make of this title. We note that Mr. Hague was a President at his last position at Hot Stuff Foods, so, perhaps, and quite understandably, he didn’t want to go backwards in the title race. Still, Safeway wouldn’t make someone President of an insignificant category, so whatever the initial motivation, it is a sign of the growing importance of perishables to today’s retailers. Mr. Hague will take over the perishable arena duties of Rojon Hasker. She did perishables as a part time job (although she probably worked double time to do it) as she also ran the Lifestyle stores. Now she will focus exclusively on Lifestyle, which of course, is a concept heavily focused on perishables. Ms. Hasker, apparently, is going to be a President as well.

The second interesting thing about Des Hague’s appointment is how thick management seems to be getting at many top retailers. As best we can discern, here is how it will work for Safeway:

Steven A Burd, Chairman and CEO

The Pundit asked his old friend Bob Backovich about it and when he was VP of Produce at Safeway he reported to the senior vice president in charge of all marketing and merchandising who reported to the CEO.

But Safeway isn’t alone in adding positions. When Bruce Peterson started at Wal-Mart the structure looked like this:

who answered to CEO.

who answers to Chief Merchandising Officer,

who answers to President of Wal-Mart Stores,

who answers to CEO/Vice Chairman of US Operations,

who answers to President/CEO of Wal-Mart Inc.

Now, of course, Wal-Mart has grown substantially in this period, as has Safeway, so there is doubtless a lot to do.

Yet, there is a danger in every layer because it means important decisions are made further and further away from the business and those decisions start being influenced by extraneous issues that are only marginally related to selling more produce more profitably.

Still, we wish both Des Hague and Rojon Hasker good fortune in their new positions and we hope that Des Hague’s Presidency symbolizes a recognition by top retail executives of the enormous, differentiating, value-adding, importance of perishables.