It is, of course, horribly sad that 18 people have died in the Multistate Outbreak of Listeriosis Linked to Whole Cantaloupes from Jensen Farms, Colorado. The government is searching hard for a cause, and food safety experts are speculating as to what the issue might be. Water, soil, animals and people are all being looked at as possible sources of contamination.

Yet, we would say it is not shocking. We also would say that whatever the specific cause of this outbreak, the more general cause is the local food movement. More specifically, the willingness of large buyers to waive food safety standards so they can buy regionally.

“I don’t think the cantaloupe industry can continue on doing the very same thing and expecting a different result,” said Craig Wilson, the head of food safety for Costco, the Issaquah-based warehouse retailer, which is regarded as a leader in requiring food safety measures from its suppliers.

“It’s time for companies to get more aggressive. If they know this is going to happen, let’s step up and not let it happen.”

He said that Costco would consider setting standards for how melons are grown and how they are cleaned and handled after they are picked. He said the company would most likely require that suppliers test melons for pathogens before shipping them to Costco.

He called on the industry to finance research into the best way to wash or clean cantaloupes to remove contaminants.

A few years ago, Costco had some issues with carrots and food safety up in Canada. When it came out that Costco was buying carrots not from Grimmway or Bolthouse but from a small Mexican producer via a Los Angeles company, we asked why Costco was doing that in a piece titled, Costco Recalls Mexican Grown, U.S. Packed Baby carrots From Canadian Stores:

With all the talk about problems in food safety, one wonders if food safety is really the top priority in procurement. If you go to the Grimmway Farms web site, it says this about food safety:

Grimmway Farms knows that it’s important for you and your family to be confident in the safety of the produce you consume. Our safety standards are among the highest in the industry. Awarded Shield #002 for participation and acceptance in the USDA Qualified Through Verification (QTV) program.

Good Agricultural Practices include monthly self-audits, quarterly third party program audits, and an annual intensive 3 day third party audit. Each field is audited prior to harvest. All new contracted growers must complete a self-audit as part of the contract. Audit reports may be reviewed by an additional third party.

Mock recalls are completed and documented often, with one of five most probable scenarios.

A new isolated Pathogen Laboratory for environmental testing provides us with results in 24 to 48 hours.

Perhaps the Mexican grower of these carrots had all these certifications. Perhaps not. Now anyone could have a problem and, in fact, we have no information that anyone has done anything wrong.

Still, it is hard to believe that Costco, which is the company pushing everyone in Salinas to test everything day and night, selected this roundabout pattern of having Mexican carrots, packed in Los Angeles and then distributed in Canada because it made the determination this was the route most likely to enhance food safety.

That piece was written in 2007, so the standards and audits have mostly changed but the point — that the Costco buyer had not selected a supplier based on the optimal food safety standard — is just as true today, maybe more so.

Although this has been portrayed as a national outbreak — and it is true that things move around in the industry due to lateral trading and the use of wholesalers and distributors — the Case Count Map clearly points to a regional product: 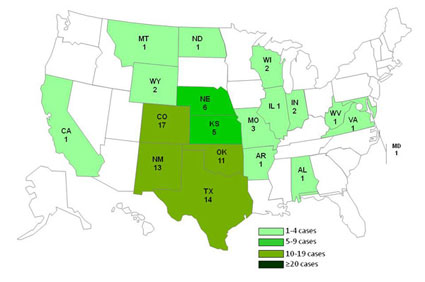 Although there are scattered cases of one, two or three people infected around the country, every single state with five or more cases is contiguous to Colorado or, in the case Texas, is separated from Colorado only by a thin strip of Oklahoma.

An awful lot of these cantaloupes wound up in Wal-Mart, but this is peculiar. It was in February of 2008 that Wal-Mart issued a press release, titled, Wal-Mart Becomes first Nationwide  U.S grocer To adopt Global Food Safety Initiative Standards:

Wal-Mart Stores, Inc. has become the first nationwide U.S. grocery chain to require suppliers of its private label and other food products such as produce, meat, fish, poultry and ready-to-eat foods to have their factories certified against one of the internationally recognized Global Food Safety Initiative (GFSI) standards.

A group of major international retailers committed to strengthening consumer confidence in the food they purchase, the GFSI now lists Wal-Mart among the companies who have agreed to improve food safety through a higher and consistent auditing standard.

Selected by CIES, the Food Business Forum, to safeguard and ensure high quality in the international food supply chain, GFSI standards provide real time details on where suppliers fall short in food safety on a plant-by-plant basis, and go beyond the current FDA or USDA required audit process. Under the GFSI program, producers of Wal-Mart and Sam’s Club private label and other foods sold in the U.S. must be audited by independently trained, approved and licensed auditors who are experts in their industry.

“The requirement for suppliers to complete these certifications demonstrates our leadership in food safety and our commitment to global safety standards,” said J.P. Suarez, Wal-Mart’s senior vice president and chief compliance officer, and a board member of the Global Food Safety Initiative. “Food safety has always been a top priority at Wal-Mart. We are taking this additional step to ensure the integrity of our products throughout the entire food supply chain. We encourage other U.S. retailers to follow our lead and to also endorse these standards.”

The GFSI requires food suppliers to achieve factory audit certification against one of its recognized standards, which include Safe Quality Food (SQF), British Retail Consortium (BRC), International Food Standard (IFS), or an equivalent such as Global-GAP. Wal-Mart has published a schedule to suppliers requiring completion of initial certification between July and December of 2008, with full certification required by July 2009. Audits will be completed by approved third party auditing companies.

So what was Wal-Mart doing buying Jensen Farms cantaloupe?

In our 2007 question to Costco, the implication was that produce buyers, though required to buy only from vendors that met certain minimum standards, saw their job as getting cheap prices once past that minimum. So, in our example, they would not gladly pay more just because Grimmway had extra certifications beyond the required minimum.

In this example of 2011, Wal-Mart buyers  have many conflicting interests. It is important to understand that when a chain announces a specific goal of buying more local, it is exactly the same thing as saying that other goals will now take on secondary importance.

We have defended the Honduran cantaloupe grower and most recently Del Monte Fresh here, here and here. Yet we should note that every cantaloupe expert in the world will tell you that it is inherently more risky to raise cantaloupes in the tropics than in the high dessert. This doesn’t mean people are wrong to eat them or retailers wrong to sell them. It means that there are tradeoffs in life.

If Wal-Mart really put food safety first, it would have never bought cantaloupes from this small producer, which produced in a six-week season what California ships in a day. Because of the Colorado soil conditions and because of its scale, this company was unlikely to have ever been judged by Wal-Mart as the safest place for them to buy cantaloupes. Wal-Mart bought for other reasons… maybe it was marketing, maybe satisfying consumer demand, maybe price. We don’t know.