Tesco came out with its first hard numbers on Fresh & Easy, and the numbers don’t illuminate much.

Tesco said it had 74 Fresh & Easy stores open as of August 23, 2008, and would have 200 stores open by February 28, 2009. However, there is no particular reason to believe the company will be able to keep this schedule.

It acknowledged that after losing £17m last year, its losses so far this fiscal year have been £60m, so total losses to date on Fresh & Easy have been £77m — in contrast to total sales of the division of £76m.

So the losses have been greater than total sales. At today’s exchange rate, Tesco lost around $137 million so far in its US adventure. Tesco portrays these as start-up costs:

These planned losses reflect the fact that the US business — which has been trading for nine months — has been built with the necessary infrastructure in place from the beginning to support hundreds of stores. At this stage, it is therefore operating with high overhead and other costs in relation to the scale of the business, whilst also trading from immature stores.

Although the degree to which the losses were “planned” is in dispute, the fact that Tesco has an infrastructure that can handle more business is clearly true, but it is difficult to know the degree to which this is the cause of the losses. After all many of the start-up costs, such as building the new distribution center, have been capitalized. Tesco did not elect to detail what the store level contribution to overhead is and so we just don’t know to what degree adding additional stores will reduce losses or establish profitability.

Some of it points to our previously expressed view that the future for Fresh & Easy involves a massive write-off when the company closes a big chunk of the poorly sited stores. After all, if the best stores are now selling over $25 per square foot per week, and Tesco mentions this because it is meaningful — in other words this is not just an aberration of one freak store but represents what the top 10 to 20% of stores are doing — yet the average sales are $11 per square foot per week, there must be a whole chunk of stores that are doing $5 or $6 per square foot, per store, per week, in order to come out with that average.

One thing that did come out from the report is that Tesco owes a lot of people, including the Pundit, an apology. Here is the graph Tesco distributed to show how Fresh & Easy is improving on its sales numbers: 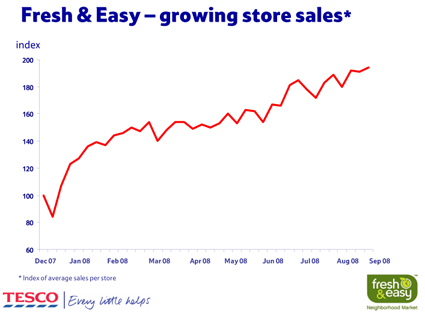 The chart doesn’t reveal much, but since Tesco tells us elsewhere that the stores are averaging $11 per square foot, per week, and the chart shows that average sales per store have more than doubled back from their low point when we were doing our estimates — as were others such as Willard Bishop — then Willard Bishop, ourselves and others who were estimating about $5 per square foot, per store, per week were exactly correct and Tesco’s dismissive attitude was just a smokescreen.

Initially Fresh & Easy had an EDLP model and did very little in the way of promotion. Now it has switched to be very promotional. Just the other day, we quoted an important industry expert:

No doubt Fresh & Easy is getting more promotional and now has ad/in-store specials versus their old EDLP ads. Keep in mind, once you have exposed your model to more people and more people like it, they will support it. It is the right decision to spend on deep promotional specials as the cheapest thing you have is the product, which usually accounts for 25% of the total sales and the rest is rent, payroll, utilities, transportation, and the ad man.

So Tesco is certainly doing the smart thing — but — and it is a big BUT — when you discount product through promotions at 50% off, as Tesco has done throughout the summer with “Grilling Packs” and other items, then allow 50% off perishables when perfectly good product, such as apples, approach an arbitrary date, then give people $5 off $20 coupons, which you allow to be used in multiples, it is unclear the consumers will stick with you should you ever decide you want to make money. Some consumers just follow the deals.

One interesting thing the data released does reveal is how horribly Fresh & Easy’s own brand product is doing. Here is what Tesco says on the subject:

Fresh foods and Fresh & Easy[s] own brand products, which represent 60% and 72% of sales respectively, have been particularly well-received by customers.

In America, though, most perishables, such as produce, meat, in-store bakery, deli etc., are not considered branded at all. In a category such as produce, with product sold in bulk, there often is no identifying information on the item or, if it is there, it is a trade brand with no consumer recognition.

This means that on grocery product, out of the 40 percentage points of store sales in this category, 12 are private label and 28 points are brand name products. Put another way, only 12/28ths, or 43%, of grocery sales are Fresh & Easy brand — and we wonder if they are including the exclusive wine offerings. Because these are pricey, it would take up a big chunk of the private label business.

In the meantime an experienced retailer recently went to visit Fresh & Easy stores for the first time and found that the experience should be considered in light of the fact that Fresh & Easy is owned by Tesco — a public company:

You will often hear people say that labor is the biggest expense in retail. Actually it is inventory that is the biggest expense in retail. When I went to visit two Fresh & Easy stores in two wildly different demographics on the same weekday morning and found them both out of stock throughout the store on identical items — I thought something was up.

Frozen food was 25% out of stock, milk was 80% out of stock — and these are big profit sources. Meat, produce, prepared foods, bakery — all 20, 25, 30% out of stock. Tesco is a very competent retailer. It is most likely out of stock, not because of vague problems with the ordering system, but it is out of stock because it has decided to dial down the inventory — even at a risk to the consumer experience.

This could be because sales are terrible and they keep dumping product. More likely it is a conscious decision to manipulate the financial results by holding down inventory levels and thus the amount of cash required to stock the stores.

It is a theory and from one who has experience working with publicly held retailers. So it could be true. It makes more sense than the theory that the uber-achieving Tesco can’t stop the out-of-stocks because the ordering system doesn’t work well.

In any case, with Wal-Mart about to open its Marketside, which we now know will have in-store food preparation and service delis — although not an in-store sandwich program — the competition is starting to heat up. Although small stores are everyone’s “project” right now, whether they can make money in suburban areas of the United States is very much an open question.