Simon Uwins is the Chief Marketing Officer for Tesco’s Fresh & Easy chain, and for almost three months now he has kept posted on its web site a piece he wrote declaring that every Fresh & Easy store that opens will have a photo of polar bears in the back room and every new employee will receive a card from the CEO with the same polar bear picture on the card.

What is with polar bears and Tesco? Here is how they explain it:

The picture is a reminder for us to be careful about our impact on the environment. That’s why we’ve invested in California’s largest solar roof installation, to help power our distribution center. Why we’ve partnered with RMG, a San Diego-based recycling and waste services company, so that we can reuse or recycle all our shipping and display materials.

And why we’ve built energy saving features into our store design, such as the use of LED lighting in our freezers, cooler doors and outside signage. Indeed, we think we’ve reduced the energy usage of the stores we’re building by [approximately] 30%. We’ve joined the Leadership in Energy and Environmental Design (LEED) volume certification pilot program, to get them LEED-rated (check it out…)

But the picture also reminds us to take a much more thoughtful approach to everything we do.

To be thoughtful about how food is produced. We’ve gone to great lengths, for example, to work with our suppliers to ensure our private label products contain no artificial colors and flavors, no added transfats, and only use artificial preservatives when absolutely necessary. Indeed, several suppliers have commented that no one has ever asked them so many questions about this before.

To be thoughtful about the work environment we create. Our approach to working shoulder to shoulder that I talked about last week is an example of that.

And to bring the benefits of fresh, wholesome and affordable food to all types of neighborhoods, including those traditionally underserved by modern grocery stores.

Does this mean we’re perfect?

Of course not, there’s always trade-offs, and we already have a long list of things we want to do, but haven’t yet been able to achieve.

But having talked to many people in many different ways about their ideal grocery store, their ideal workplace, and their ideal neighborhood, we’re convinced there’s an appetite for thoughtful consumption, as long as it’s affordable and convenient.

As ever, we’ll only find out if we’ve got it right when we open our first stores, later this year.

If we have, it should be good for customers, employees, neighborhoods, and shareholders alike…..and also, in some very small way, for those polar bears…..alright son?

Tesco has chosen to present itself to the American public as something different than Kroger, Safeway or Wal-Mart, not only in store concept but in social responsibility.

Yet, there is some sense in which the success or failure of the Tesco effort in the U.S. May well depend on whether consumers consider Tesco to be sincere in these representations. This is why attacks from the editorial page of the Los Angeles Times for not locating stores in poorer areas as promised, which we discussed in our piece Tesco Takes Heat For Not Supporting Underserved, really can matter.

Simon Uwins’ piece, with its reliance on his nine-year-old son as the source of authority on the impact of global warming on polar bears, reminds one of the famous “Amy Carter” debate in which President Carter was ridiculed after he pointed out that he turned to his 13-year-old daughter, Amy, to help him prioritize different national policy interests: 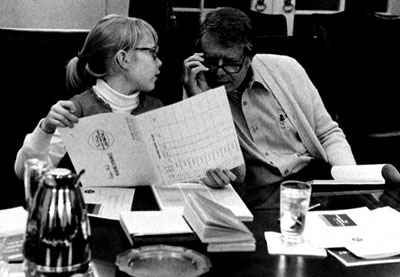 The debate was sponsored by the League of Women Voters. Held on October 28, 1980, it was a debate between then President Carter and Ronald Reagan. Howard K. Smith of ABC News was the moderator.

MR. SMITH: President Carter, you have the last word on this question.

MR. CARTER: I think, to close out this discussion, it would be better to put into perspective what we’re talking about. I had a discussion with my daughter, Amy, the other day, before I came here, to ask her what the most important issue was. She said she thought nuclear weaponry — and the control of nuclear arms. This is a formidable force. Some of these weapons have 10 megatons of explosion. If you put 50 tons of TNT in each one of railroad cars, you would have a carload of TNT — a trainload of TNT stretching across this nation. That’s one major war explosion in a warhead. We have thousands, equivalent of megaton, or million tons, of TNT warheads. The control of these weapons is the single major responsibility of a President, and to cast out this commitment of all Presidents, because of some slight technicalities that can be corrected, is a very dangerous approach.

President Carter, of course, lost the election and if Tesco is relying on the authority of a nine-year-old, it May not do much better. Because it is pretty clear that this business of polar bears drowning due to melting ice is unsupported by any facts.

In the United Kingdom itself — Tesco’s home turf — a judge was recently analyzing the veracity of similar claims made by Al Gore in his movie, “An Inconvenient Truth”. The judge, Sir Michael Burton, is from the left-leaning British Labour party so, if anything, might be sympathetic to Al Gore. Yet, on this issue he was clearr:

The judge also said there was no proof to support a claim that polar bears were drowning while searching for icy habitats melted by global warming. The only drowned polar bears the court was aware of were four that died following a storm.

Besides, even if the polar bear population was threatened, it is far from clear that reducing energy use makes any sense at all as a strategy to combat such a problem.

Bjorn Lomborg, who has a new book “Cool It: The Skeptical Environmentalist’s Guide to Global Warming,” which we discussed here, put it this way in a Washington Post piece:

Of course, it’s not just humans we care about. Environmentalists point out that magnificent creatures such as polar bears will be decimated by global warming as their icy habitat melts. Kyoto would save just one bear a year. Yet every year, hunters kill 300 to 500 polar bears, according to the World Conservation Union. Outlawing this slaughter would be cheap and easy — and much more effective than a worldwide pact on carbon emissions.

Tesco is a giant corporation with extensive resources. One would think it would carefully vet any claims before it starts posting them in every back room and putting them on postcards sent out by the CEO.

That they didn’t… that they elected to use as the centerpiece of such a campaign a sort of pop-culture environmentalism, where Tesco mindlessly repeats claims popularized by movies and parroted by nine-year-olds, rather than engage in serious scholarship on such important issues, makes one suspect that it is all a marketing game.

It is as if at Tesco they believe in things not because they know them to be true or because they represent deeply held values but because they see a marketing advantage to positioning themselves in one particular way.

So if a movie makes a falsehood widely believed, instead of helping its employees and customers understand the truth, Tesco tries to ride the wave.

It is hard to imagine anything less socially responsible than that.