It May be Fresh, But it Won’t be Easy is the name of a new Credit Suisse report on Tesco’s American venture that we’ve been studying lately. We started out with Tesco’s Success Course Far From Easy, and then ran a piece entitled, Tesco In America: . We looked at Tesco vs. Costco, and then at Tesco vs. Target.

One of the key issues the report deals with is real estate and it puts up several examples of sites the Credit Suisse people believe are possible Tesco locations. Take a look at these pictures: 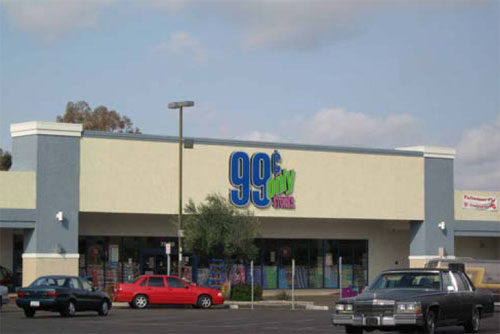 If Credit Suisse is correct, we are obviously not talking about an upscale concept. And frankly, it is hard to perceive anything in these locations as the giant killer Tesco is reputed to be.

Yet, in the end, these types of locations have one great advantage: they are available. You couldn’t duplicate the store structure of Safeway or Kroger for any amount of money because there just aren’t enough prime locations available. These sites are available.

That matters a lot. When Marks & Spencer bought Kings in New Jersey, there were all kinds of grandiloquent plans to expand. But they never could get the locations and if they got the locations, they couldn’t get the staff. So this concept seems better thought out than that expansion plan.

However, this advantage of being doable can swiftly turn into a vulnerability if other retailers choose to respond with competitive formats. It means they can roll out quickly too. One doubts that Kroger (Ralph’s) and Safeway (Von’s) are going to just allow their market shares to shrink without fighting back if this concept takes off.