We’ve written many pieces about Tesco and its entry into the American market. Now we have received a letter from an executive of a grower/shipper with experience in branded marketing who visited a couple of Fresh & Easy stores:

Attached are a few photos of two Fresh & Easy Stores that I visited the other day. 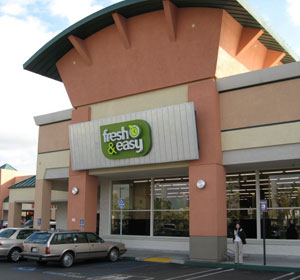 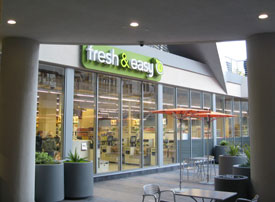 The last photo is a Hollywood Blvd store in a mall that only has access from the street or underground parking.

Our assessment is similar to those of the Perishable Pundit:

Perhaps Fresh & Easy is starting to make progress on its out-of-stocks problem. And the customer count is higher than previous reports, such as here and here. But the Hollywood store, where our correspondent reported 20 customers, just had its grand opening, and sales and traffic typically decline initially after a grand opening, especially one like this where the Hollywood location brought lots of media attention.

The critique of the brand and its lack of equity with American consumers is pointed. When Wal-Mart rolled its supercenter concept across the United States, it also had no brand equity in fresh produce. Bruce Peterson made the decision to “borrow” brand equity by carrying only the top brands. This allowed a no name in the field to compete. Some of the top brand marketers have told us that Fresh & Easy won’t be carrying their product because Tesco was only interested in price. The company probably would have done better to carry the top brands and gradually introduce its private label.

The plastic issue cuts both ways. We have heard from many consumers, including Mrs. Pundit, that they prefer the produce to be packaged as Fresh & Easy does it, thinking it less likely to have been contaminated by workers or other shoppers. At the same time, Tesco has been so sanctimonious about its “green” credentials, one supposes that the particular customers it has tried to attract — those who care about “green” things — will see the packaging as a breaking of trust.

We also suspect that whatever consumers may say, the beautiful, artistically lit fresh display at, say, a Safeway Lifestyle store is far more likely to encourage shoppers to buy than the sanitized, plastic-covered environment. One is warm and inviting; the other cold and off-putting.

The frustration with vendors who don’t want to be indirect suppliers is expressed in this letter. Although the other day, we heard the first report of a break in the system:

All five stores had consistent merchandising, pricing and the same SKUs in produce. They also all had two specials leading off the produce dry section — 10# bag russet at $1.99 and a 10# bagged navel at $3.99. This is the first time they have allowed the vendor to do the packaging and use their own brand and you could tell it was to cut cost and they were in bins.

One of the challenges of the Tesco procurement system is that it makes it difficult to take advantage of opportunities grower/shippers would otherwise present. Especially now, when Fresh & Easy is so small, the company could get many opportunities to offer consumers, but the product may already be packed or time is of the essence, or vendors would rather offer it to a chain who will buy direct.

This is the second time we have heard of this $5 coupon off $20 purchases being given out to everyone in the store. Although the hope, of course, is that consumers will buy $100 baskets and get 5% off, our Pundit Intelligence Network finds little of that. Supermarket margins being what they are and Tesco not having the advantage of low real estate costs as they do in the UK, giving away 25% of sales is pretty hefty.

Both our assessment and that of the independent report by Willard Bishop is that sales are running around $50,000 a store — when Tesco was expecting around $200,000 a store. This means the stores are hemorrhaging money and the coupon is an attempt to both bring in customers and get customers in the store to try more products.

Tesco has put-off revealing sales data but that will only last so long. We can expect a concerted effort to boost sales before Tesco has to release numbers. If the company released them today, heads would have to roll.

We also got a kick out of the hybrid car parking sign. We’ve dealt with Tesco’s wearing its environmentalism on its sleeve in Tesco, Polar Bears And Social Responsibility. We think that for all their consumer research, they seem to have missed how diverse our culture is and that pronouncing one’s positions in this way is at least is as likely to alienate Americans as to win friends.

What is Tesco exactly saying to the vast majority of its customers who analyzed their personal situation and decided that buying a non-hybrid car was the smart thing for them? That they are stupid and should listen to Tesco?

What is Tesco saying to the poor, single mother who needs a car to get to work but can only scrape up enough money to buy a very old used car from the time before they even had hybrids? That she isn’t thought very highly of at Fresh & Easy?

That sign is symbolic of a lot of Tesco’s problems in America. It consistently alienates people from the community it is supposedly trying to build.

There is a tin ear at Tesco, some odd sensibility that leads the company to offend Americans time and again.

Besides, how precisely, will the hybrid car parking spot be enforced? Presumably Tesco will call a tow truck belching greenhouse gasses to tow the car “illegally” parked in the spot. Even if this happens only occasionally, has Tesco done a Lifecycle Analysis to measure the total Carbon Footprint of this initiative?

No, they haven’t? Shame on them; they wouldn’t let a supplier get away with that.