T.G.I. Friday’s Weighs In On Obesity

With obesity being focused on as Public Health Problem #1, the produce industry is poised to launch its new Fruits & Veggies — More Matters brand. It is an exciting program but only half the story.

In order for eating more fruits and vegetables to help with the obesity problem, we need to either get more active or eat less of something else. If you read the USDA standards, you can see, by implication, that this is precisely what is supposed to happen.

But politically, as we discussed here, it is very difficult for the government to simply issue a press release saying to everybody: eat less meat.

Yet the message seems to be filtering out. The latest indication is that T.G.I. Friday’s has come out with a new menu that emphasizes smaller portions at lower prices:

In an unprecedented move in the casual dining industry, T.G.I. Friday’s restaurants today became the first restaurant chain in the category to offer a variety of smaller portion entrees at lower prices all day, every day with its Right Portion, Right Price menu.

“This is a category issue stemming from consumer demand. The category needs to listen,” said Richard Snead, president and chief executive officer of Carlson Restaurants Worldwide, parent of T.G.I. Friday’s restaurants. “We are listening.” 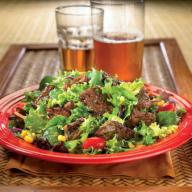 “Cutting back on portion sizes is one of the best strategies for helping individuals lose or maintain their weight,” said Julie Upton, spokesperson for the American Dietetic Association. “This is especially true when eating out. Serving smaller restaurant portions is a great strategy for helping people lose or maintain their weight and most consumers won’t even notice that they’re being served less, and they’ll really appreciate the potential health payoffs.” 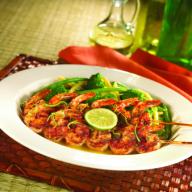 “This is a significant part of Friday’s overall goal of personalizing and customizing the guest experience,” said Snead. “No matter what your lifestyle choice, you don’t have to sacrifice taste. Smaller portions at smaller prices meet all lifestyle choices.” 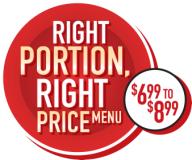 The Right Portion, Right Price menu will be featured at 582 US T.G.I. Friday’s restaurants locations.

Eating out and eating the right portion size is psychologically difficult because economically we assume that if we get more of something — such as food — we are getting a better deal.

But, of course, if we eat more than we should, it is not a better deal; it is a worse deal.

Because T.G.I. Friday’s is offering a price break for the smaller portion, it might change some of the psychology.

T.G.I. Friday’s hasn’t released nutrition information, which is a bad sign, but the photos look as if most of the meals are rich in fruits and vegetables.

This chain has often looked to cater to the dietary desires of its customers, including offering an Atkins-based menu.

In looking to offer reduced-portion size, it is opening the way for the dietary shift of calories from protein to produce that has to occur if our diets are to get in sync with our caloric expenditure.

If this is the start of a trend, then MORE really will MATTER for the produce trade.