I went to sleep last night thinking about what I would write about the decision of Paramount Citrus to leave the Sunkist co-op and begin marketing its own fruit.

The connection between citrus and pomegranates? Well that would be 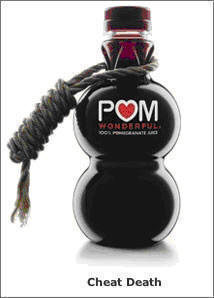 The Franklin Mint or, to be more precise, Stewart and Lynda Resnick and their company Roll International. Holdings include Fiji Water, Teleflora, Paramount Farms, Paramount Citrus, POM Wonderful and The Franklin Mint. POM Wonderful is the largest producer of pomegranates in the United States and has been the pioneer in developing a fresh juice and beverage category for pomegranates.

It is not surprising that Paramount Citrus is going to go its own way. The company was actually founded back in 1950 with the objective of giving citrus growers an opportunity to market their fruit independently of Sunkist.

Besides, after buying Dole’s citrus operations in 2000, it became the largest player in the business, accounting for about 10% of all the citrus shipped from California and Arizona. They have a lot of economy of scale all their own.

Paramount’s decision to separate from Sunkist follows Jeff Gargiulo’s decision to leave the company. It is probable that the decisions are related.

It doesn’t surprise me. Jeff Gargiulo did extraordinary work with Sunkist. The last few years working with talented people such as Rick Eastes, who launched Sunkist’s global sourcing operation, and Robert Verloop, Sunkist’s vice president of marketing, Gargiulo orchestrated an explosion of activity. Sourcing was diversified so that Sunkist could supply citrus from Chile, South Africa and Australia into Japan, Hong Kong and Canada. Domestically Sunkist began selling berries and launched a fresh-cut joint venture with Taylor Farms. Marketing found a way to work with both Elmo and Billy Dean.

But Jeff did yeoman’s work. The things he did were obviously needed for decades. I wrote a column about it 15 years ago. But working with a co-op is a challenge, and what Sunkist needs today is the kind of structural reform that other co-ops such as Calavo have already gone through.

I’ve never met the Resnicks, but the slow building of consensus necessary to achieve structural change at a co-op must be painfully difficult for anyone who can innovate as they have with Pom Wonderful. It is really a case study for the whole industry as they have poured money into both research to prove the worth of their product and product development to find new uses. A two-second look at their ad campaigns and you see this is a different kind of produce company.

Bottom line: Sunkist is an immensely important produce company, and it has a brand of almost priceless value. But its grower owners have to realize that retail has changed. Buyers need companies to manage categories and source the best product at the best value at all times. You can’t have two masters, and the master has to be the customer.