A glowing portrait of Mayda Sotomayor-Kirk makes the cover of Florida Trend magazine. The piece, titled Seald Sweet Successfully Goes Global, tells the story of how a traditional agricultural cooperative moved international and uses the rise of Mayda to CEO as a kind of parable in which the cultural growth symbolized by Mayda’s ascension to the CEO position symbolizes and parallels Seald Sweet’s growing international ties: 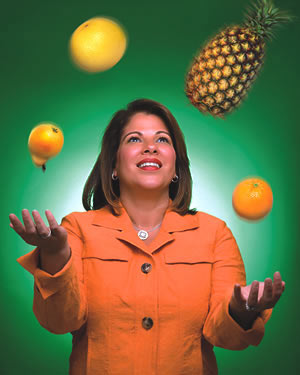 For more than a century, Florida’s citrus growers dominated America’s produce aisles in the winter, especially in the Northeast. Bright orange and yellow citrus displays went up in grocery stores around the first cold snap, and pent-up demand from consumers who hadn’t seen oranges, grapefruits and tangerines all year guaranteed the growers healthy sales and profits.

Global trade eliminated that seasonal advantage, however. Buying fruit from around the world, Wal-Mart, and then other grocery chains, began to stock everything from blueberries to navel oranges and watermelon all year long. The international cornucopia eroded Florida growers’ status with their grocery customers in two ways: New competitors from Spain to South Africa took market share in the winter, and the Florida growers had no fruit to sell during the rest of the year.

By the 1990s, Florida’s oldest citrus cooperative, Seald Sweet, had begun trying to enter the import business, buying fruit from various overseas growers and reselling it in the U.S. The initial efforts were spotty and by most accounts halfhearted — dealing with foreign farmers was an uncomfortable proposition for the ultratraditional leadership of the cooperative, a non-profit organization that let the Florida growers combine their marketing and sales efforts. “Growers are sometimes their own worst enemy,” says Frank Hunt III of Hunt Bros. in Lake Wales, a member of the co-op since 1928.

What Seald Sweet needed was a real overseas partner. And in 1998, the cooperative’s growers agreed to sell a 50% stake to Hein Deprez, a Belgian businessman who ran a global produce company called UniVeg. Deprez, who’d been a customer of Seald Sweet, took the cooperative private and, with then-CEO Bruce McEvoy, set out to make the company a global player. “As much as they needed a global market, UniVeg needed a U.S. market,” says Deprez. “As a customer, we knew they had a very good reputation and market position for citrus in the United States.”

At a company whose historic leadership was all-white, all-male, all-Florida and all-citrus, Deprez’s and McEvoy’s first key hire was a shocker: A young, Cuban-American woman who admitted she didn’t know a navel from a Valencia.

It is a touching piece. Mayda is generous in crediting Alan J. Levy of Great American Farms as a mentor, and the story of how she came to Seald Sweet includes an admirable moment of filial devotion:

Sotomayor-Kirk landed interviews with Deprez and McEvoy, who offered her a job as Seald Sweet’s director of imports. She wanted the position but felt the co-op’s headquarters in Vero Beach was too far from her father, who had grown very ill. On the morning she was going to turn down the offer, he died — a sign, she says, “that my father had given me his final go-ahead.”

Mayda’s father was Victor Perez and Mr. Perez, along with his wife, Adela, fled Castro’s Cuba and brought Mayda’s brother, also named Victor, and Mayda, who was only three years old, to the United States on the famed Freedom Flights. You can read many poignant stories about those journeys to freedom at a site the Miami Herald maintains, called Freedom Flight Memories.

There is much controversy for the industry and the country related to immigration. Much of the focus unfortunately has been on immigrants as a source of manual labor. Mayda’s story reminds us that though immigrants can benefit from America — surely Mayda has had access to opportunities here she never would have under Castro — America also benefits from immigrants. Mayda’s industry and intelligence testifies to that.

Immigration policy has been put on the back burner because of the recession. The issue will rise again though, and when it does we ought to think hard as to whether we are creating the conditions to encourage, and capitalize on, a future Mayda Sotomayor-Kirk.

In the meantime, what we really need to know is does Mayda actually know how to juggle all those fruits?