Jan Fialkow, managing editor of PRODUCE BUSINESS magazine — and daughter of a New England grocer who purchased all his produce off the terminal markets — gave the presentation in Boston before a large audience of both the New England industry and national suppliers. As Jan explained: 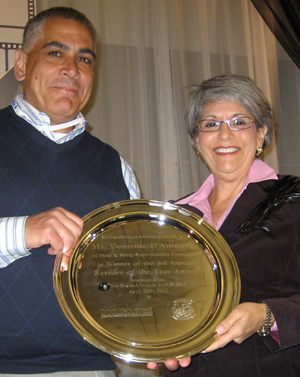 There must be something very special about the New England retail produce world because its companies seem to be able to attract top-notch people and keep them forever. Like Roche Bros.’ Paul Kneeland and Shaw’s Jack Salamon, the first two winners, this year’s winner has spent his entire career at one company. I guess if you can start your career pushing carts at store level and rise through the ranks to become vice president of produce, it’s worth staying with one company.

He has been successful even when the corporate structure has changed. He joined Stop & Shop back in 1968, when it was owned by the Rabb family, continued on his upward path during the years of KKR ownership and reached even greater heights under the aegis of Ahold.

His peers call him resilient, proactive, innovative, passionate and soft-spoken. A strong developer and motivator of people, he has trained many of his teams’ associates — past and present. In addition, he has adapted to changing technology and was instrumental in helping the company’s Training Department develop an intranet-based learning tool for those produce teams.

Midway in his career, he sat on a buying desk where he learned the growing end of the business as well as the merchandising and retail end. He has been described as sales and store driven because he took a lot of what he learned at the store level and integrated it into his present position.

Stop & Shop has gone through many produce department formats and designs through the years and our winner is responsible for the current open format that highlights produce freshness, quality, value and variety. The company is a strong supporter of local growers and the local growing communities know and respect him. He also heads up the teams that were awarded a Produce For Better Health Excellence Award this year.

One colleague describes him as following his own convictions — which is evidenced by the incredible courage it takes to live here and be a Yankees fan! This aberration was probably easier to deal with when he lived in the company condo in New York during the period when he was instrumental in bringing the Edwards stores into the fold.

Or perhaps this aberration is what caused him to become a runner, even participating in some distance races. Of course, he says it’s for fun and relaxation, but you have to wonder if it isn’t an attempt at self-preservation. I sure hope he doesn’t wear pinstripes when he’s out there running.

His wife Linda has been a tremendous support and his children are a source of pride. His daughter Haley also runs track and his son Seth has a part in a Disney movie that will be coming out in the fall, and his son Damon is following in his footsteps at Stop & Shop.

So this is the 2007 New England Produce Council Retailer of the Year — a dedicated man with a long history of professional and personal achievement. Ladies and gentlemen — Domenic D’Antuono

The secret had been kept from Domenic and he was quite surprised, but the audience wasn’t and gave a standing ovation at Domenic’s inspiring rise through the ranks to winning this award.