Some Advice For CDC And FDA

The government is doing two things that needlessly are raising concern among consumers. When this crisis is all over, the produce associations should really talk to CDC and FDA about the way information is presented.

The first problem is that government agencies on both the state and federal levels keep announcing “additional” cases or “new” cases or an “increase” in the number sickened in the outbreak.

These announcements seem to be uniformly misunderstood by consumers.

What the government authorities typically mean is that the cases are “new” to the government. The cases have finally snaked their way to the CDC from the state health departments, which have finally gotten stool samples back confirming that the sick person has the salmonella strain tied in with this outbreak, etc.

Consumers, however, seem to interpret news of this sort as an indication that dozens of people got sick just yesterday.

Surely the FDA and CDC only want to present accurate information.

So each time additional people are added to the number sickened by the outbreak, it is extremely important that CDC, FDA or a state health agency always announce the illness onset date. Something like this:

Obviously if there is a real danger out there and people are falling sick every day then the government should say so, but to cause panic with “new” illnesses that are actually weeks old simply makes no sense.

The second issue that the associations should talk to CDC about is its famous map of where people are ill. This map is wildly deceptive. Take a look: 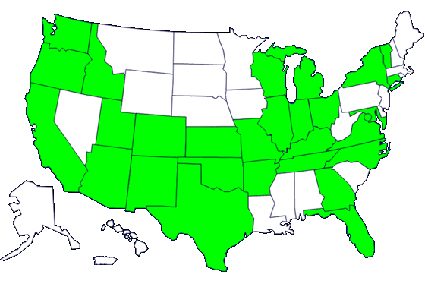 Since April, 277 persons infected with Salmonella Saintpaul with the same genetic fingerprint have been identified in 28 states and the District of Columbia: Arkansas (2 persons), Arizona (19), California (6), Colorado (1), Connecticut (2), Florida (1), Georgia (7), Idaho (3), Illinois (34), Indiana (7), Kansas (8), Kentucky (1), Maryland (1), Michigan (2), Missouri (4), New Mexico (68), New York (2), North Carolina (1), Ohio (3), Oklahoma (4), Oregon (3), Tennessee (4), Texas (68), Utah (2), Virginia (16), Vermont (1), Washington (1), Wisconsin (5), and the District of Columbia (1). These were identified because clinical laboratories in all states send Salmonella strains from ill persons to their State public health laboratory for characterization. Among the 202 persons with information available, illnesses began between April 10 and June 5, 2008. Patients range in age from <1 to 88 years; 46% are female. At least 43 persons were hospitalized. No deaths have been officially attributed to this outbreak. However, a man in his sixties who died in Texas from cancer had an infection with the outbreak strain of Salmonella Saintpaul at the time of his death. The infection may have contributed to his death.

The problem with this map is that, like an Election Day map on TV, it is one of two colors — in this case white or green.

For Election Day, this makes sense since the state is either Democratic or Republican.

But for a map of illness, this model — on or off, white or green — makes no sense. If you look at this map, it looks like a broadly dispersed problem. However, if you study the numbers, you see how deceptive that is.

New York may be green — but only with two people ill. Vermont, just one; Connecticut, only two; Florida, only one, etc. By way of contrast, Texas and New Mexico have 68 each!

Obviously, the proper way to do a map such as this would be with pins or tacks — each point on the map symbolizing one illness. If this is too complex, CDC could use gradations of color, dark green for states with over 50 data points, pale green for those with less than 10, etc.

In a highly mobile society such as the US, the fact that a few people in a state get ill points to the nature of tourism and business travel more than tomato distribution. Of the 28 entities (States and the District of Columbia) listed as having people ill in this outbreak, fully 20 have five people or fewer who fell ill.

We should really talk to CDC about doing a map that more accurately reflects the distribution of illnesses.