As we evaluate whether Tesco’s plans to come to America with a small store concept heavily focused on fresh foods is viable, we should be aware that all over the world, retailers are claiming to see a niche in this area.

For example, the Taipei Times has an article entitled, Wellcome Bets on ‘Express Fresh’ Model:

With most of its Wellcome stores categorized as standard, or medium-sized, stores, the firm is developing a smaller design, called “Express Fresh,” requiring only around 80 ping (264 square meters).

While each standard store requires around 2,000 households to support its business, the new “convenient value supermarket,” as the firm describes it, only requires 800 to 1,200 households.

“The innovation is necessary as hypermarkets and convenience stores continue with their aggressive expansion, squeezing the supermarket sector’s survival space,” chief executive officer Howard Tsai (蔡裕人) said on the sidelines of a press conference yesterday held to celebrate the Hong Kong company’s 20th anniversary in Taiwan.

“The public’s consumption patterns have also changed as the birth rate has dramatically dropped and small families become the mainstream,” he said.

Aimed at providing consumers with convenient locations to purchase fresh foodstuffs and daily necessities, Wellcome Taiwan started brewing the Express Fresh concept in September last year and the first outlet was opened in Sindian (新店) in Taipei County in April.

It is expected to open the 7th store of this kind today, bringing its total number of stores to 188 nationwide, including 179 Wellcome stores, five Jason’s Market Place stores and four Wellcome Gourmet stores.

The Express Fresh model on average generates sales of between NT$4.5 million (US$135,200) and NT$5 million a month, compared with NT$7 million seen in standard stores, he said.

But the cost, including rent, personnel and hardware, is only half that of mid-sized outlets, he said.

By the end of the year, the firm hopes to add another 40 to 50 stores of the Express Fresh model, although it may also expand standard-sized supermarkets.

When the retail market was affected by the consumer credit abuse storm last year, Wellcome Taiwan saw the performance of its stores dwindle as shopper traffic slowed.

Ministry of Economic Affairs statistics showed the supermarket sector recorded revenues of NT$88.5 billion last year, up by 1.93 percent from the previous year.

The sector is headed by Pxmart (全聯社), the nation’s biggest “hard discounter,” better known as Chuan Lian Center (全聯福利中心), with over 300 stores.

The parallels are fascinating. You read a line like “Aimed at providing consumers with convenient locations to purchase fresh foodstuffs and daily necessities…” and they might as well be speaking of Tesco’s new Fresh & Easy concept.

Or when the CEO speaks out and says this: “The innovation is necessary as hypermarkets and convenience stores continue with their aggressive expansion, squeezing the supermarket sector’s survival space.”

“The public’s consumption patterns have also changed as the birth rate has dramatically dropped and small families become the mainstream,” he said.

Changing consumption patterns and changing demographics are a battle as large stores and tiny stores squeeze the middle. Howard Tsai might as well be speaking of Phoenix. 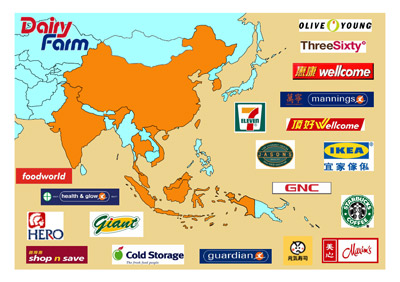 Wellcome is owned by Dairy Farm Group, which operates an astounding array of stores, many under brands very familiar to Americans:

The Group operates under well-known local brands, including:

Health and Beauty stores — Mannings in Hong Kong, Macau and Southern China, Guardian in Singapore, Malaysia, Indonesia and Thailand, Health and Glow in India, and Olive Young in South Korea;

Convenience stores — 7-Eleven in Hong Kong, Macau, Southern China and Singapore, and Starmart in Indonesia; and

The Group has a 50% interest in Maxim’s, Hong Kong’s leading restaurant chain.

You can see a nice presentation about its annual results right here.

And its annual report right here.