At the recently held Great American Seafood Cook Off in New Orleans, the winner was Chef Justin Timineri, Executive Chef of the Florida Department of Agriculture, who worked with Chef Joshua Butler, Chef for the G 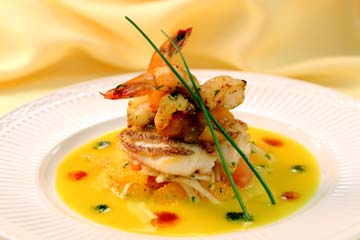 overnor of Florida. The winning dish, which the Pundit vows to prepare knowing that Mrs. Pundit will be more than suitably impressed, was built around Florida snapper, shrimp, tropical fruits and citrus. You can read about the winning chefs and get their recipes here. 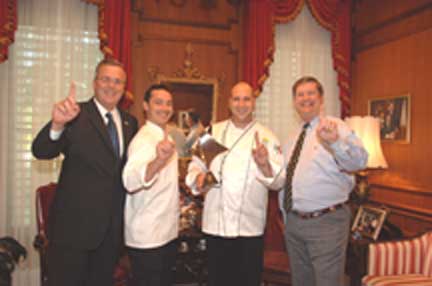 Chef. But, this guy does great stuff. The department describes his job this way:

“As Executive Chef for the Department’s Division of Marketing and Development, Justin’s responsibilities include promoting all of Florida’s agricultural products, creating new recipes, attending trade events, performing cooking demonstrations and educating children on the value of health and nutrition in food.”

So, for example, earlier this year he was in the United Kingdom as part of the Fresh from Florida, Florida Agricultural Promotional

Campaign. He did demonstrations in the flagship stores of the Waitrose chain to promote Florida grapefruit, sweet corn and blueberries. It was a follow-up, building on the success of a program confined to sweet corn, which was done in 2005. The Perishable Pundit’s sister publication, AMERICAN FOOD AND AG EXPORTER, profiled that effort here.

There is some controversy over the degree to which many of the various state promotional programs increase total demand, as opposed to re-shuffeling it toward the more active promoters. But foreign promotions, which often involve introducing consumers to new products, are often a big win. For example, the article in AMERICAN FOOD AND AG EXPORTER explains what was experienced at the promotional effort in Britain:

“…only three out of 30 people at a recent demonstration had ever tried sweet corn. When we introduced children’s workshops into our demonstrations, we found that no child present had tried blueberries.”

What opportunities the world presents to expand business. But Americans are blessed with a large and rich domestic market and so are generally lazy exporters. There are exceptions, of course, with some firms highly dedicated to the pursuit of business overseas.