Sara Lee And Kraft Tie In To Produce

In an effort to tap into the nation’s growing appetite for meals on the go, the two suburban Chicago food giants are using their existing brands to enter an entirely new product category for each: prepared salads. Sara Lee, operating on the premise that meat makes a meal, is launching a national “Go Meat!” ad campaign today featuring its new Hillshire Farm Salad Entrees, kits that contain meat and other ingredients for making a salad, except lettuce.

Kraft’s Fresh Creations salads, which include lettuce along with Oscar Mayer meat, Planters nuts and Kraft cheese and salad dressing, are being tested in Boston and Denver, where ads tout them as alternatives to restaurant salads. Kraft also has been rolling out new chicken-salad kits, without lettuce, under its South Beach Diet brand in stores nationwide this month.

Partly this is an effort to get into higher traffic areas of the store:

With their new salads, Sara Lee and Kraft also are avoiding the less-traveled center aisles of supermarkets, where most packaged food is sold, and getting into higher traffic areas of the store. Sara Lee’s salad kits are being displayed in the refrigerated-lunch-meat section, where its Hillshire Farm lunch meat and sausage are carried. That is the same section where Kraft’s South Beach Diet salad kits will be. But Kraft decided to place its Fresh Creations salads in the produce section, because they contain lettuce.

But it is an ambitious effort:

Kraft’s South Beach Diet chicken-salad kits come in two varieties — cranberry walnut and Santa Fe — that will be included in a broader advertising campaign for South Beach Diet products. Kraft’s Fresh Creations salads come in four kinds, each packaged in a single-serve bowl. Because Kraft is selling those salads in only 100 stores in each of its two test markets, it is doing print and billboard ads only in Denver and Boston, through New York ad agency mcgarrybowen.

“The idea behind our Fresh Creations salads is that they replicate restaurant-quality salads,” Kraft spokeswoman Lisa Gibbons says, adding that Kraft hasn’t decided yet whether it will roll those out nationwide.

Sara Lee’s new salad kits come in similar varieties, including chicken Caesar and turkey and cranberries with ham julienne. The first Hillshire Farm salad commercial that will air is a 15-second spot in which two women are sitting at a kitchen table when a voice announces, “It’s lunchtime!” As a chorus of what sounds like cheerleaders extols the meaty virtues of the Hillshire Farm salads, one woman starts pouring a package of meat on the other woman’s salad. A man’s voice cheers, “Hillshire Farm. Go meat!”

You can see the Hillshire Farm TV commercials here. 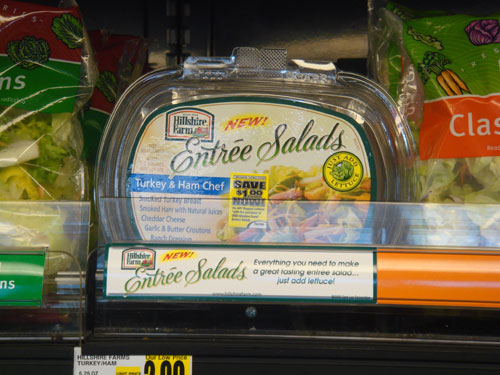 One suspects, however that produce departments won’t let it happen. The photo accompanying this piece was from a real produce section at a Lowes store in Charlotte, North Carolina. Note that even though the article claims the Hillshire Farm products are being sold in the lunch meat area, at least in this Lowes store, they are actually being sold in the produce department.