One of the great things about the The New York Produce Show and Conference is that attendees have an opportunity to broaden their horizons — intellectually and physically — because, in addition to the trade show and conference, the event also includes community exploration in the form of incredible tours. One tour is to the Hunts Point Market, the epicenter of the produce trade in greater New York. Another tour heads down to give attendees a sneak preview of the new Philadelphia Market, a state-of-the art-facility redefining what it means to be a wholesale market — that tour offers an extra dose of sweetness in the form of a visit to a Wegmans store.

We also have a tour of suburban New Jersey retailers and a fantastic New York City tour that includes prominent and innovative retailers and a visit to a unique urban rooftop farm. This is the next big thing with specialized companies now approaching supermarkets to build such facilities on their roofs. 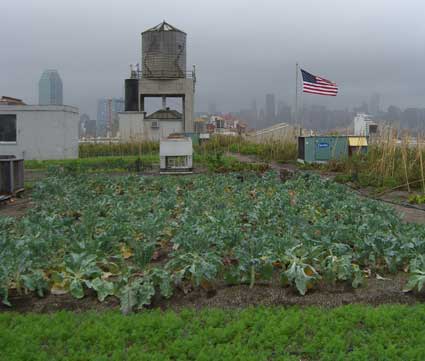 We thought a visit to the Brooklyn Grange — an acre rooftop farm growing commercially in Queens — would be just the kind of “only in New York” experience attendees would value, so we arranged to include it in our Manhattan tour — even though it is just over the bridge in Queens. The New York Times has written about the farm in a piece titled, Six Stories Above Queens, a Fine Spot for a little Farming, and we asked Pundit Investigator and Special Projects Editor Mira Slott to visit the farm and get us a little preview of what we can expect to see on the tour: 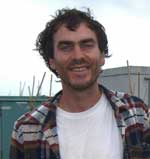 Q: What inspired you to develop this innovative and expansive urban rooftop farm project? Spanning close to an acre, dozens of varieties of vegetables, fruits and herbs are growing and thriving from a rooftop with a breath-taking view of the Manhattan skyline in the background. Was there a notable moment, or a confluence of different circumstances that pushed you forward in your mission?

A: It was a strong interest in farming coupled with a desire to remain in the city, plus the pure practicality of the project. There are also so many community and environmental benefits, which continued to make the concept feel right.

Q: What do you see as the greatest challenges?

A: The greatest challenges are sales and distribution. From the growing side, I’d say dealing with the wind.

Q: You seem to have experience in that regard. Recently on a stormy day, you moved swiftly and purposefully to weather-proof the farm as the wind gusts picked up and the skies were about to burst with torrential rain. What are some of the biggest surprises you’ve discovered as you’re developing this project?

A: Things grow great! Shishito peppers, aji dulce peppers, ruby streaks mustard greens. Also to my surprise was the total domination of flea beetles in July, and the ability of weed seeds to blow up six stories in only about seven days after the installation. 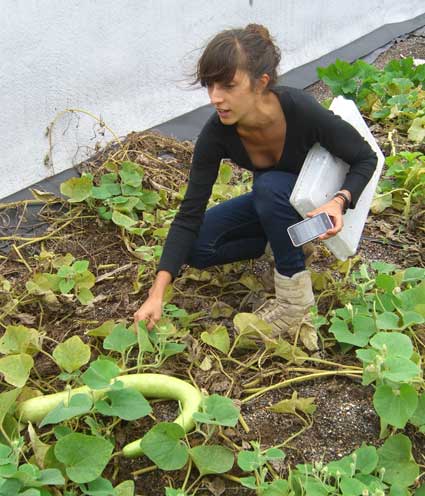 Q: On a visit in October, your associate Anastasia Cole pointed out the unusual Italian Cucuzza squash that grows really long. Also in season at that time, spinach was back, wild arugula, carrots, French breakfast radishes, end-of-the-season tomato varieties, eggplant, sweet peppers, hot peppers, mixed lettuces and herbs, including Thai basil, thyme and rosemary. There was also a purple tomatillo that tasted like a plum. What else could you tell us that might surprise people in the produce industry? 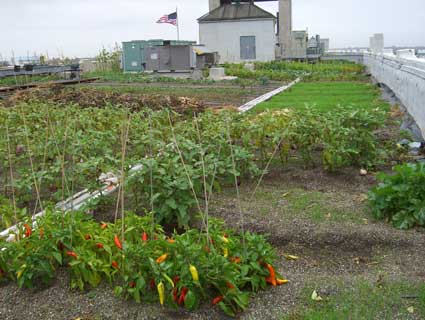 A: I think the produce industry might be surprised at how much volume we can grow, especially salad greens in the spring. There are hundreds of thousands of plants on the roof and we farm about nine months of the year. [The 40,000-square-foot farm is made up of roughly 1.2 million pounds of soil and over 20,000 linear feet of green roofing material). We also pick everything the same day that we deliver to our chefs.

Q: Tell us about your customers, and the types of potential customers that could benefit from your operation…

A: Our operation is split between our markets (direct to consumer) and restaurants/retail. Markets make up about 40 percent of our sales, while restaurants and retail establishments are about 60 percent. Chefs are very fun and exciting to deal with, however we struggle to keep up with the sales and service side, due to limited time and transport resources.

Q: How unique is Brooklyn Grange? Are there other projects popping up like this in the region, and around the country?

A: It is one of a kind right now. No commercial operation of this scale exists currently. Hydroponics operations are being sized and considered. 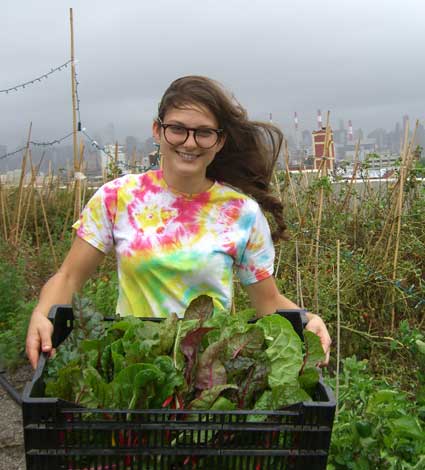 Q: One of your interns, Hayley Knafel, an environmental studies major at New York University, shared her perspective. She said she’s uplifted by the opportunity, every time she looks out from Brooklyn Grange at all the other rooftops across the City landscape. Where do you see the most untapped potential for urban farming?

A: Roofs in very dense cities. It may not make as much sense in less dense cities with less expensive land near to the city centers.

Q: Are there other related or unrelated projects that have sparked your interest?

A: Hydroponic projects. I’m interested in trying to curb hydro to make it more environmental, and produce more flavorful produce, and then I would be interested in testing it.

Q: What do you envision five years from now for Brooklyn Grange and for urban farming in a broader realm?

A: I want to prove that this will be a viable commercial operation, and then help to improve our food system, whilwhile carrying out an enjoyable career doing something that I love, which is farming.

The Momma Pundit might be embarrassed that we mention this — especially as she and the Poppa Pundit are planning on being at the show — but in her childhood days she lived for awhile on a goat farm in Queens. Little did she know that agriculture would return to what is now such an urbanized area.

If you are interested in signing up for The New York Produce Show and Conference, you can learn about the event here.

You can register online here.

Or if you would like to just go on a tour or add a tour to your existing registration use this PDF here.