Rick Eastes has frequently shown up in the pages of the Pundit. We mentioned him in Sunkist Wake-up Call? — our very first piece on Sunkist. When he was with Sunkist he wrote pundit Mailbag: Sunkist Responds To Article and two months later we were running Eastes Leaves Sunkist.

In the course of our coverage of Sunkist, Rick’s name was raised again in Pundit’s Mailbag — In Defense of Sunkist’s New CEO. He came up again in both Bee Sweet Departure Adds To Sunkist Woes and A Paradigm Shift for Citrus.

Pundit’s Mailbag — Sunkist And The Australian Citrus Deal was built around a letter from Jeff Gaston of Sunkist Vancouver and subjected the nature of Rick’s accomplishments at Sunkist to scrutiny. 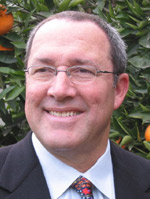 More recently, under the umbrella of his own marketing and consulting firm, Rixx Intl. Marketing Co., Rick made several valuable contributions to industry discussions: He wrote about food safety, did a lengthy piece on immigration and economics and submitted a thoughtful letter on organics and the hype surrounding this issue.

Now comes word that Rick has joined the staff at Ballantine Produce Company:

Ballantine Produce Company, based in Reedley, California, announced that industry veteran Rick Eastes has joined the company as of July 1.

David Albertson, principal, commented, “Eastes is a recognized leader and pioneer in the fresh produce industry with specific experience in the supply and marketing of table grapes from California, the Southern Hemisphere, and Latin America.”. Albertson continued, “Initially Eastes’ role with Ballantine will be to drive the launch of Ballantine’s premium Grower’s Table concept and brand in table grapes in its California production.”

“Although Ballantine is already known for having a high quality California grape program, it has been our goal to prepare as much of our production as possible to deserve the highest level of recognition for quality in the industry,” said Steve Ryan, Senior Vice President of Sales.

Ryan believes that, “Demand for premium-grade grapes, in unique formats, is evolving quickly and Ballantine has committed itself and put the resources in place to meet our buyer’s premium and more diversified standards.”

According to Eastes, “Ballantine has established its presence over decades in the San Joaquin Valley for its quality of treefruit and grapes.

“As good as they are, they understand that their customers’ needs are always evolving, and that the continual dedication to strive for superior quality, flavor, and packaging must parallel the customer’s needs to meet the ever changing consumer expectation.”

Eastes continued, “Because of Ballantine’s commitment to excellence, I believe I will be able to add value to not only its dedicated network of buyers, but to Ballantine’s supplier base as well.

“The Grower’s Table concept for table grapes will be my first priority, but as that program finds success, we expect to expand the concept to other product lines, including our imported fruit as well,” according to Eastes.

Through its participation in the Ripe ’N Ready program, Ballantine has a focus on high-flavor fruit. This “Grower’s Table” program seems designed to kick it up a notch. The opportunity to do something exciting like this is really just what Rick has been looking for.

Best wishes to Rick and to Ballantine Produce for many years of productive association.