When this American boy came to Britain, he told them we always had a sports star at the New York produce show and conference. This past year, we pointed out it was Walt Frazier. A fact that resulted in blank stares as none of the UK staff, though mostly sports mad, had ever heard of him.

So we decided that between football (our soccer), rugby and cricket, we knew almost nothing and, as such we would leave this particular decision 100% to the British team. We were a little limited as many of the top athletes are in preparation for the upcoming World Cup. However our London Produce show staff team, definitely picked a winner: 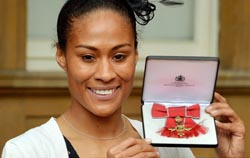 On the main seminar stage at 1 p.m. on Thursday, June 5, England’s most capped football (soccer) star, Rachel Yankey, will be interviewed by Tommy Leighton about her glittering career to date, her thoughts on the upcoming World Cup in Brazil and the role she now plays in introducing youngsters to a healthy diet.

Yankey has had an incredible football career, which began at eight-years-old when she masqueraded as a boy to get a game. She has represented her country — England — on more occasions than anyone, male or female.

She became England’s first full-time professional woman footballer with Fulham Ladies in 2000 and has won countless honours with Fulham, Arsenal Ladies and other teams at home and in North America.

She is known for more than just her playing ability, however — having first received her MBE in 2005, the Arsenal Ladies star was named in the New Year’s honours list in December 2013, for her tireless work in promoting the women’s game at youth level. She picked up her OBE earlier this year.

Having now appeared on 129 occasions for England, Yankey admits to feeling a “sense of responsibility” for the younger generation following her into the game.

Inspiring the next generation has been a priority for some time. She runs the Rachel Yankey Football Programme, which introduces schoolchildren to the importance of diet and teamwork as well as teaches them the game.

‘Projects like this are what I want to stay heavily involved in — the coaching side and educating youngsters,’ Yankey says. “It’s important for any youngster to look up to someone who has been there and done it, that you can Google, that you can watch on TV. It’s special. I’m very grateful for what football has given me. There are a lot of young, talented players,and I need to make sure that I show them my experience and help them come through.”

So come to The London Produce Show and Conference and meet Rachel Yankey and see how her journey of success can inspire you.

If you would like some additional information, here is a small brochure we prepared.

You can register for the London Produce Show and Conference right here.

Finally, though the exhibition hall is sold out, we still have some wonderful opportunities for sponsors to step in and become Charter Sponsors. If you would like to receive more information on how your organization can be part of this great new industry institution, please let us know here.