We’ve recently run several articles related to Wal-Mart, and our pieces, Wal-Mart Continues To Change Its Buying Practices and Ron McCormick Of Wal-Mart Elaborates On Its Procurement Reorganization, brought forth some additional thoughts from an organization that follows major retailers closely:

Very insightful articles. Wal-Mart’s buying practices are changing across the board at the moment, and a lot of questions remain in the minds of vendors. 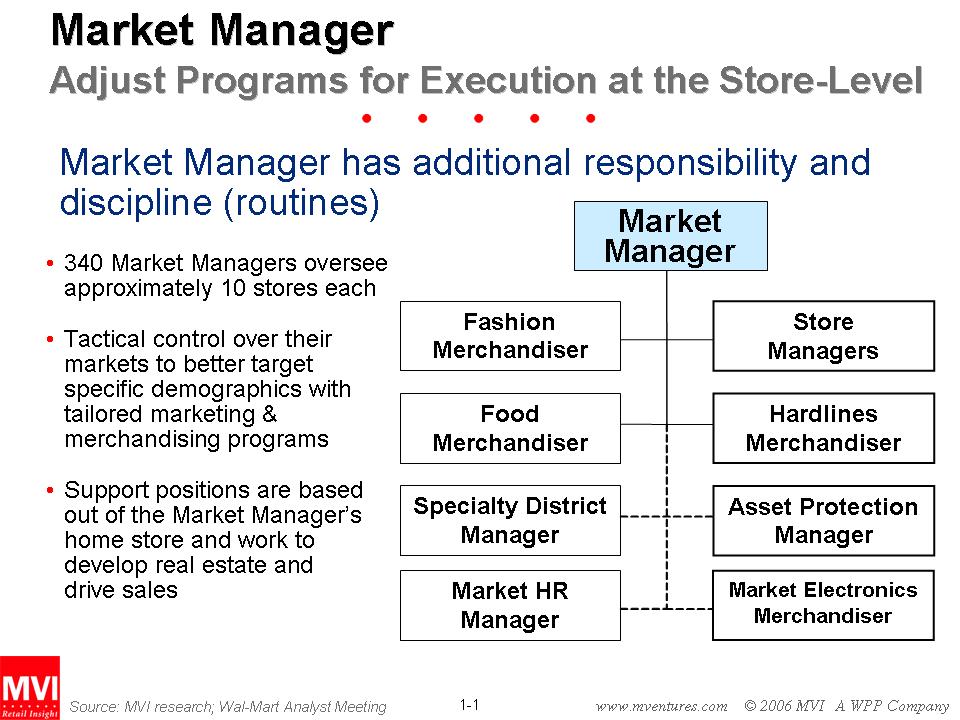 Are you familiar with Wal-Mart’s relatively new “Market Manager” role? It was part of the restructuring of Wal-Mart’s Store Operations group that began in Q4 of 2005. Some of the key changes were:

Elimination of the District Manager position. The new Market Managers have additional responsibility, more efficiencies, and discipline. The key mandate is to adjust programs to execute at individual stores.

All support positions are based out of the market manager’s home store, working closely to develop real estate and drive sales.

The strategy, along with Wal-Mart’s “Store of the Community” initiatives, actually suggested that Wal-Mart considers geography very relevant. But now, having read your assessment, I’m not so sure.

Do you know anything about those food merchandisers supporting the Market Managers? I wonder what relationship they have to the “opportunity buyers” you discussed.

Keith’s information is correct and, yes, every Market Manager at Wal-Mart has a food merchandiser called a Market Grocery Manager or MGM. The question is what effect this has on merchandising.

The first problem is that very few of these merchandisers are really experts at merchandising a full range of food. A break down might go something like this:

In other words, the bulk of these MGMs are severely limited in the contribution they can really make.

The second problem, and probably the bigger issue, is that though, theoretically, the MGMs are there to help the stores “run the play” or, put another way, they are there to help store and departmental managers execute the corporate merchandising plan, in actuality, the MGMs serve at the whim of the Market Manager and this fragmentation of authority has caused there to be less uniformity in execution.

This is quite significant because anyone who visits as many Wal-Marts as the Pundit does knows instantly that the biggest problem with Wal-Mart is that they offer an inconsistent presentation to the consumer.

The “Achilles heel” of Wal-Mart right now is inconsistency in retail execution.

As far as the importance of geography goes, we wouldn’t draw too much from produce procurement plans on that point. The switch from distribution center assignments to dollar volume assignments in the context of a reorganization of vendors into strategic and tactical ranks is procurement- and not merchandising-driven and shouldn’t impact Wal-Mart’s ability to get whatever it wants, wherever it needs it.

As we discussed in Wal-Mart Distractions, however, the company’s decision to attempt to merchandise according to six “target groups” inherently devalues its long time “Store of the Community” initiatives.

As we said in that piece:

The “Store of the Community” is the perfect idea. What happens is that Wal-Mart has gotten a little remiss in execution, as I reported here. So the answer is a more vigorous and rigorous approach to implementation.

Unfortunately, a group of MGMs not particularly expert in what they are doing, and controlled by a very decentralized process, is unlikely to help Wal-Mart achieve better execution anytime soon.