Our piece — What Do Bicycle Helmets And Organic Produce Have In Common?— brought many responses from all over the spectrum. To some, the idea of government regulating activities of this nature is manifestly about something other than safety:

Bureaucrats love regulations and the bigger the bureaucracy, the more rules are created (and the less those rules serve common-sense goals). Is not the common-sense approach to encouraging bicycling by relaxing the rules on helmets a microcosm of the anti-big government mood of the U.S. electorate?

Each new year brings new and more costly regulations to doing business. The benefits of these rules have become secondary to the nobility of the rule-makers’ intentions.

Thanks for this refreshing dose of common sense.

One has to acknowledge that Doug is on to something. There is little evidence that the efficacy of regulations is an important criteria in their establishment or maintenance.

Take something such as COOL — the country of origin labeling requirement. There was little reason to ever think it would change consumer produce purchasing habits but, now, having been implemented, there also seems to be absolutely no interest in determining the impact or effectiveness of the regulation.

It is as if the “good cause” itself justifies the expense and effort. There is no cost/benefit analysis, no need to prove the regulation accomplished anything at all. It is just one more regulation burdening commerce.

In contrast, others see the desirability of helmet regulations as manifest:

What has happened to common sense in America? We have become a nation of Pundits (no offence Jim) that can take any subject, spin it, and make people believe it sounds logical. Mitt Romney alluded to this about his five sons in the first debate. As they were getting older, his sons believed the more they could repeat their ‘spin’ on a specific topic, the more likely they could convince their parents they were right.

Now we have a New York Timesreporter spinning the extraordinary exuberance of cycling without a helmet and justifying it by stating “…many researchers say if you force or pressure people to wear helmets, you discourage them from riding bicycles. That means more obesity, heart disease and diabetes.” He then takes it a step further by adding, “…a result is fewer ordinary cyclists on the road, which makes it harder to develop a safe bicycling network.”

Next I expected to read how wearing a helmet was keeping us from obtaining World Peace! First, note the so-called “researchers” are not identified. Could these possibly have been buddies he was riding with one day and in general conversation one of them mentioned, “You know, I bet if we didn’t wear helmets, it would encourage more people to ride”?

Having been an active cyclist for 10+ years, the thought has never crossed my mind that not wearing a helmet would encourage me to ride more. The article does state that many European health experts take a different view; “Yes, there are studies that show that if you fall off a bicycle at a ‘certain speed’ and hit your head, a helmet can reduce your risk of serious head injury.

A CERTAIN SPEED? Are you kidding me! Again, this is where common sense is needed. Having taken a fall on asphalt traveling 18 mph, with skin ripped from my shoulder and arm, and a scratch 8 inches long down the side of my helmet, I can testify wearing a helmet prevents serious injury.

But, if you have ever ridden a road bike with clip-in shoes, you have probably experienced an unexpected sudden stop where you were unable to un-clip your shoes quickly and toppled over. Regardless of whether you are traveling 18 mph or at a stand-still, if your head hits concrete pavement without a helmet, it will hurt and can cause serious long-term damage.

Much has been written about the growth of Organics in produce with opinions on both sides spinning the benefits and/or non-benefits. Proponents claim it is better for you, healthier and better to be grown without pesticides. A recent study conducted by Stanford University and released in the Annals of Internal Medicineconfirms that “consuming organic foods reduces consumers’ exposure to pesticide residues and to bacteria-resistant to antibiotics, but that the nutritional value between the two categories is not significant.”

A new study published by Produce for Better Health Foundation (PBH) concludes that consumers have a much better chance to reduce their risk of cancer by eating one more serving of fruit and vegetables a day than worrying about cancer risks from pesticide residues on produce. The study estimated 20,000 cases of cancer per year could be prevented in the U.S. if just half of the U.S. population increased its fruit and vegetable consumption by one serving a day.

The study also looked at the likely relationship between pesticide residues and cancer and concluded the upper limit of 10 cases or less per year could result from residues. The research used estimates from a 2011 World Cancer Research Fund and American Institute of Cancer Research published report, according to the release from PBH.

“Fear of cancer from pesticides unfortunately affects the perception of some consumers towards fruits and vegetables; this analysis shows that the opposite is true,” Rick Reiss, principal scientist, Exponent, said in the report. “Consuming a diet rich in fruit and vegetables is a way to prevent cancer and to lead a generally healthier life.”

“This study beautifully demonstrates relative risk: 20,000 to 10 or less,” PBH President Elizabeth Pivonka said in the release. “In fact, the true benefits are underestimated, given the role fruit and vegetables play in weight control, reduced risk of heart disease and overall cellular function in addition to cancer prevention.”

Pivonka said in the release that it is much more important to make fruits and vegetables at least half of what you eat than to be distracted with concerns about pesticide residues.

Wake up America! Research and start making decisions for yourself based on what makes sense, not on what someone else has twisted and repeated again and again to make you think it makes sense. Consumption of fresh produce is the answer for many of the health issues we face today.

We have the resources to safely grow, harvest and market an abundance of affordable product for everyone in the United States. If in your mind it makes sense to purchase Organic, do so. On the other hand, if you believe conventional produce tastes good and is good for you, then purchase it. Regardless, it is our responsibility to the produce industry, to our families and to our country to encourage everyone to EAT MORE PRODUCE!

Oh yea, unless your head is harder than concrete, wear a helmet and get out and ride your bike!

Maurice is an enthusiastic cyclist and one could support few causes more worthy than contributing to support his annual efforts in the Ride Without Limits, Benefiting United Cerebral Palsy, in honor of his granddaughter Tatem. We made a donation, and you can do so on Team Tatem’s Fundraising Page.

However, Maurice’s very intense involvement in cycling may make his thought process and experience atypical with the casual bicyclist.

When the Pundit was a kid, we rode bicycles without helmets. In fact, we didn’t know one single kid who had a helmet. Now, if you are like me and you have to search for your helmet and get your kids to do the same each time you want to go for a ride, bicycling becomes less spontaneous and more of a project. We have no trouble seeing how that could depress the amount of bicycle riding that gets done.

When one turns to the issue of bike sharing programs, a requirement for helmets definitely depresses participation. Under these programs, one picks up a bike a Point A and rides it to point B, where one can return the bike to the system. Imagine perhaps getting off a subway stop and then riding the rest of the way to a park near one’s work.

But many of these programs don’t offer helmets — so now one must carry one’s own around.  Even if they start to offer helmets, many who would be comfortable riding a shared bike won’t want to wear someone else’s helmet, which could be sweaty, dirty, have lice etc.

These programs don’t involve road bikes with clip in shoes — in fact when you look at these programs, the riders are often in their work or leisure clothes, not athletic garb, not even sneakers.

Here is a fairly typical photo from the Dutch bike sharing program: 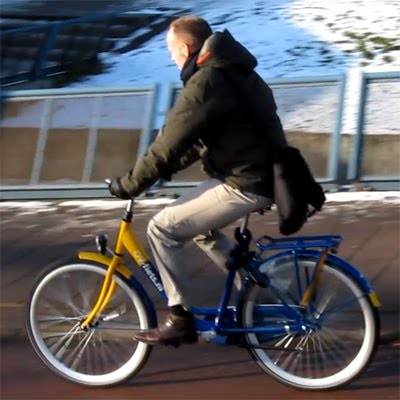 This type of casual rider will certainly be deterred if he now has to carry around a helmet and can’t just impulsively grab a bike share bike.

The argument that requiring a helmet psychologically suggests that bike riding is a dangerous activity is more difficult to verify, and quantifying the impact of such requirements is almost impossible. But it is not implausible.

It is also the exact argument that the produce industry asserts against things such as the “dirty dozen” list. The idea is that scaring people about the dangers of minute pesticide residues does not, in fact, increase public health. Whatever benefit may be derived by people switching to organic is far outweighed by people eating less produce due to fear of pesticides.

In bike riding and in public health advisories related to food — and in much of life — we have to make sure that we do not allow the best to be the enemy of the good. Thinking one can only ride a bicycle with a helmet or that one can only eat organic produce are both manifestations of this attitude.